One in five doctors in the UK have been sexually harassed or witnessed it while at work, a shocking survey has found.

Offences included being groped, receiving explicit text messages and emails and being repeatedly asked to go on a date.

Most of them were carried out by patients, but some were at the hands of fellow doctors and nurses, according to the poll.

The survey of 1,378 hospital doctors and GPs in the UK was conducted by Medscape – a news and education website for clinicians – over the summer. 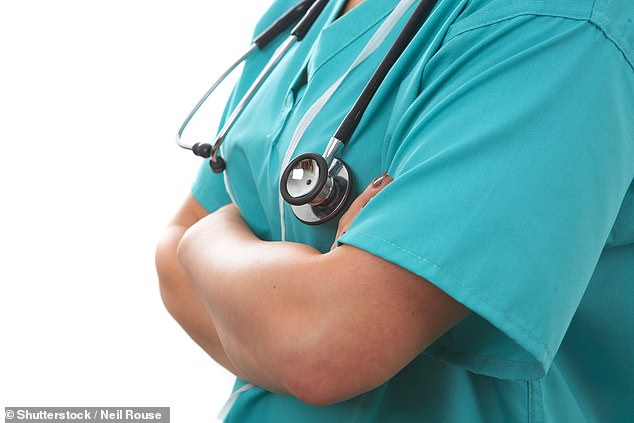 One in five doctors have been sexually harassed or witnessed it while at work. Offences include being groped, receiving explicit text messages and emails and being repeatedly asked to go on a date (file)

A fifth (21 per cent) of those surveyed said they’d experienced or witnessed sexual harassment at work in the past three years.

The most common type of sexual harassment by patients was acting in an overtly sexual manner (53 per cent), asking the doctor to go on a date (29 per cent) and trying to grope them (24 per cent).

The UK’s biggest doctors’ union apologised to its members in April and promised to launch an urgent investigation into ‘abusive’ sexism in its ranks.

Accusations included senior doctors ‘braying loudly’ as they guessed the bra size of a colleague.

Another was sexually propositioned at a meeting and some have been subjected to thigh squeezing and bottom patting, senior figures revealed.

Sexism against women in the BMA has been reported by GP Online and prompted a public apology from the organisation of 160,000 doctors.

Two senior members of the BMA’s General Practitioners Committee, its board for GPs, revealed their own experience in a column.

They described the misogynistic behaviour they and their colleagues have suffered, revealing they have been bullied, overlooked, put down and ‘stabbed in the back’.

Dr Zoe Norris and Dr Katie Bramall-Stainer said: ‘The time is now to blow open the lid on this outdated culture.’

The pair also claimed a number of female leaders had stepped down from roles rather than face ‘conscious belittling, tiresome innuendo or being patronised’.

They added: ‘There must be a wholesale culture shift away from drinking and dinners, taps on the shoulder to take on roles, under-the-breath comments, factions and back-stabbing.’

In one in eight cases, the patient propositioned the doctor, and a small number (six per cent) involved the clinician receiving a sexual email or explicit photograph.

When the harassment was carried out by a colleague, the most common incident involved someone deliberately infringing on their personal space (46 per cent).

They also reported unwanted groping, hugging or physical contact (44 per cent), comments about their body parts (34 per cent), and being repeatedly asked for a date (32 per cent).

More than half (56 per cent) of doctors who’d been harassed by a colleague said they hadn’t reported it as it was someone in a superior position to them.

Around 40 per cent of those who were harassed adopted negative behaviours to cope, including binge eating, drinking alcohol and spending more time sleeping.

Almost half (49 per cent) avoided working with specific colleagues and more than a quarter (29 per cent) had thoughts about quitting their job.

Dr Rob Hicks, GP and co-author of the report, said ‘The healthcare clinical setting is often a high pressure environment, with doctors increasingly reporting a great deal of stress.

‘Doctors have a right to a safe workplace, yet this report shows that many are still experiencing or witnessing unacceptable behaviour by colleagues and by patients.’

‘Sexual harassment can be extremely distressing for those affected and this has wider implications on patient safety and quality of care, as this study highlights.’

An NHS England spokesperson said: ‘No one working for the NHS should have to tolerate sexual harassment from either patients or fellow healthcare colleagues and if there is any suggestion of criminal behaviour, the NHS will work with the police and Crown Prosecution Service to secure swift prosecutions.’

Royal College of Physicians president Professor Andrew Goddard told MailOnline: ‘No doctor should face sexual harassment in the course of their work, this is completely unacceptable.

‘All hospitals should make sure there are safe and easy to access ways for staff to raise concerns about such behaviours.’