Home » Health News » One in 10 NHS patients are alcoholics

One in ten patients admitted to an NHS hospital are dependent on alcohol, a study has found.

The same research uncovered a fifth of inpatients drink to a harmful level – which is dangerous to their health.

Researchers at King’s College London said the issue of alcohol abuse is worse than previously thought.

The figures – based on data from 1.6million people – are eight and ten times higher than that seen in the general population, respectively.

Doctors behind the study said hospital staff should receive specialist training on how to spot and deal with alcohol dependency.

The research suggests treating patients’ drinking problems would relieve the burden on the NHS. 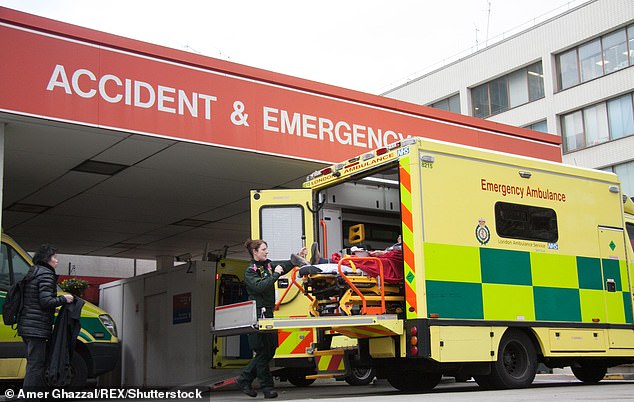 One in ten NHS patients are alcoholics, King’s College London estimates, as doctors warn the problem is worse than they had ever realised. Stock photo

Alcohol-related conditions – such as liver disease and pancreatitis – are estimated to cost the NHS around £3.5billion per year, the team said.

They estimated the prevalence of heavy alcohol use among inpatients, reporting their findings in the journal Addiction.

Dr Roberts, a qualified psychiatrist, told MailOnline that he did not find the results surprising.

However, he said: ‘When I talk to colleagues in A&E or mental health units they are quite surprised by these numbers.

‘Many doctors are aware alcohol-related conditions are common among hospital inpatients.

‘But our results suggest the problem is much bigger than anecdotally assumed.

‘I think obviously people with alcohol problems have more health problems and are concentrated in hospital settings.

‘But the sheer numbers are quite surprising to hospitals. We are probably not picking up on them as much as we should.’

Alcoholism has damning affects on general long-term health, causing many forms of cancer, as well as liver and heart disease.

But the immediate dangers, including injuries, sickness or violent behaviour, can land people in hospital regularly, too.

The NHS advises men and women to limit themselves to 14 units of alcohol a week, which is roughly the equivalent of six pints of beer or ten small glasses of wine.

Booze-related hospital admissions have risen every year since 2008, according to NHS Digital figures, with the older generation fueling the increase.

In the year 2017/2018, 1.17million hospital admissions in England listed alcohol as the main reason, or as one of the secondary diagnoses.

This was 7.2 per cent of the overall number of hospital admissions and was three per cent higher than in 2016/17, NHS Digital said.

Dr Roberts said: ‘The NHS report the number of hospital admissions related to alcohol each year. But one person may be responsible for multiple admissions. Our study estimates the number of people who have problems with alcohol in hospital.’

He said dedicated inpatient alcohol care teams are needed to ensure people with drinking problems are being addressed.

The National Institute for Health and Care Excellence (NICE) defines harmful drinking as consumption that causes health problems, including mentally.

Drinking too much alcohol regularly can lead to depression, accidents or physical illness such as acute pancreatitis.

Alcohol dependency is when a person craves alcohol and will continue to drink it even if the consequences are obviously harming them.

DO YOU DRINK TOO MUCH ALCOHOL? THE 10 QUESTIONS THAT REVEAL YOUR RISK

One screening tool used widely by medical professionals is the AUDIT (Alcohol Use Disorders Identification Tests). Developed in collaboration with the World Health Organisation, the 10-question test is considered to be the gold standard in helping to determine if someone has alcohol abuse problems.

The test has been reproduced here with permission from the WHO.

To complete it, answer each question and note down the corresponding score.

0-7: You are within the sensible drinking range and have a low risk of alcohol-related problems.

Over 8: Indicate harmful or hazardous drinking.

8-15: Medium level of risk. Drinking at your current level puts you at risk of developing problems with your health and life in general, such as work and relationships. Consider cutting down (see below for tips).

16-19: Higher risk of complications from alcohol. Cutting back on your own may be difficult at this level, as you may be dependent, so you may need professional help from your GP and/or a counsellor.

20 and over: Possible dependence. Your drinking is already causing you problems, and you could very well be dependent. You should definitely consider stopping gradually or at least reduce your drinking. You should seek professional help to ascertain the level of your dependence and the safest way to withdraw from alcohol.

Severe dependence may need medically assisted withdrawal, or detox, in a hospital or a specialist clinic. This is due to the likelihood of severe alcohol withdrawal symptoms in the first 48 hours needing specialist treatment.