NHS oncology nurse, 26, is diagnosed with cancer after GP wrongly dismissed lump in her breast as ‘probably nothing’

An NHS oncology nurse was diagnosed with stage two aggressive cancer after her GP wrongly dismissed a lump in her breast as ‘nothing’, she claims.

Sophie Jackson, 26, from Bournemouth, Dorset, found the mass on her right breast in September last year and immediately went to her doctor to have it checked.

But she was told the lump was probably caused by her hormonal cycle and to wait four weeks to see if anything had changed.

Not content with that answer given her experience on cancer wards, the nurse pushed for a referral to a breast cancer clinic at Poole Hospital.

She was given an ultrasound and four biopsies were taken from the lump in October, before she got the devastating news it was cancer a week later on November 4.

Immediately, she knew she would have to face her hair falling out, infertility and surgery over the coming months.

She traded her scrubs for six cycles of chemotherapy, 10 rounds of radiotherapy and a lumpectomy, receiving the drugs she had previously administered herself.

After 10 months, she is now cancer free and has returned to work at University Hospitals Dorset, where she feels she has a ‘unique understanding’ of what patients are going through.

But she was told the cancer is likely to return in the next two years and is having to undergo a chemically-induced menopause that may lead to her bones becoming fragile.

Ms Jackson is now spreading the message for women to check their breasts, adding she may have died had she not rejected her GP’s advice and got herself a referral. 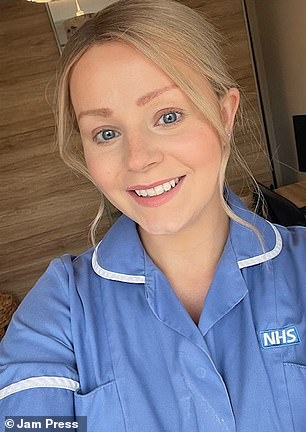 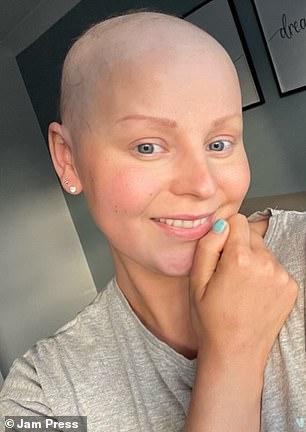 Sophie Jackson, 26, an oncology nurse from Dorset, was diagnosed with stage two aggressive cancer after her GP wrongly dismissed a lump in her breast as ‘nothing’, she claims 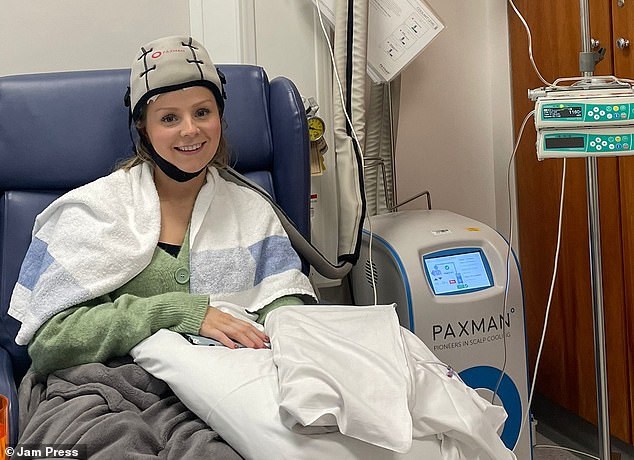 Her hair started coming out as a result of the chemotherapy, including her eyebrows and eyelashes. Pictured: Her first chemotherapy session

Around 56,000 new cases of breast cancer are detected in the UK every year, making it the most common form of the disease in the country.

It is the second most prevalent cancer in the US, with 288,000 diagnoses a year — 30 per cent of all female cancers.

The disease mainly occurs middle-aged and older women, with few aged younger than 45.

A family history of breast cancer, being overweight and taking hormone replacement therapy or certain types of the pill can increase the risk of the disease.

Breast cancer kills around 11,500 in the UK every year, making it the fourth most deadly form of cancer in the country.

But nearly nine in 10 women with the disease survive for five years or more after their diagnosis.

‘Other than the lump I had no other symptoms whatsoever. It felt completely random and the diagnosis was such a shock.

‘I felt let down. The doctors initially thought it was nothing purely based on age.

‘I feel frustrated on the guidance out there with the ‘stereotypical’ lumps to look for such as being hard or non-moveable as mine met all the criteria to be what they classed as ‘nothing’.

‘If I’d left it four weeks like the GP suggested, it may have spread in that time and I’d have been looking at an incurable diagnosis.’ 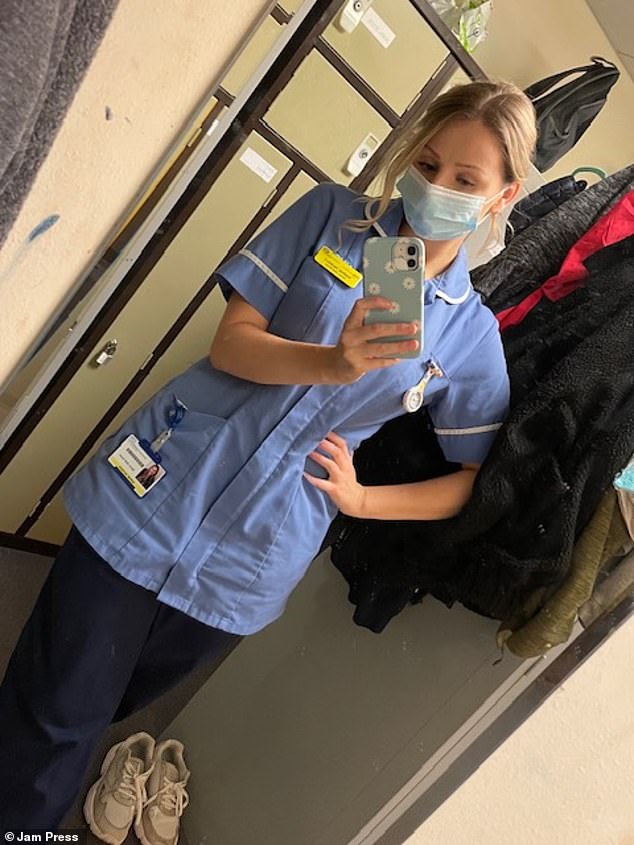 After 10 months, she is no cancer free and has returned to work, where she feels she has a ‘unique understanding’ of what patients are going through 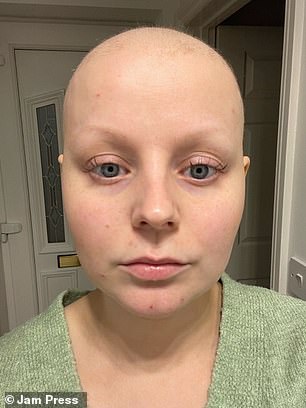 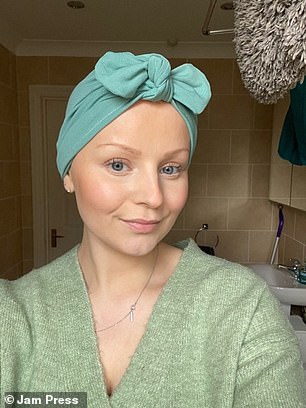 In February, she decided to shave her head after her second round of the treatment, opting to wear wigs and headscarves

As well as feeling frustrated, Ms Jackson also struggled with already knowing how the process would work.

She said: ‘When I was diagnosed it was extremely overwhelming — usually you drip feed patient information as it is way too much to take on at once.

‘I didn’t have that luxury and instead was instantly aware of facing surgery, chemo, losing my hair and becoming infertile at such a young age.

‘I think my job did help in a way as I didn’t have the expected anxieties about chemo.

‘I knew what would happen, I knew the drugs, and I knew and trusted the people giving it to me which saved a lot of worrying.’

She had a lumpectomy — when a tumour and some healthy tissue is removed from the breast — on November 30, less than a month after diagnosis.

This was followed by fertility treatment starting on December, chemotherapy begging in January and radiotherapy this June.

Her hair started coming out as a result of the chemotherapy, including her eyebrows and eyelashes.

In February, she decided to shave her head after her second round of the treatment, opting to wear wigs and headscarves.

She said: ‘It felt really strange receiving chemotherapy drugs I’d given to other patients before, like an out of body experience.

‘I was also in disbelief seeing my name on the chemo bag and having my details checked when it was usually me on the other side.

‘It caused distress as being unwell meant I couldn’t work for a while which made me anxious — especially seeing my colleagues continue working and looking after me.’ 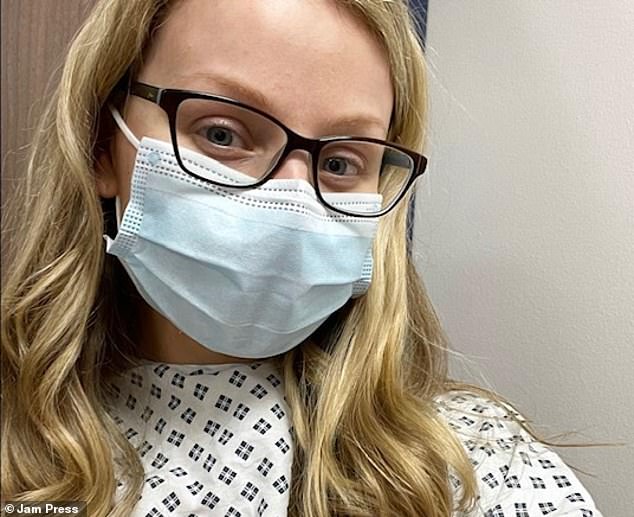 Sophie has been told that her cancer is likely to return within the next two years, but now wants to help raise awareness on the devastating disease 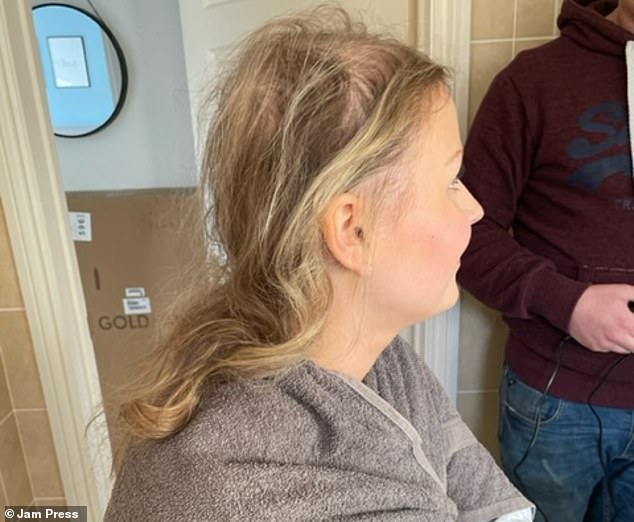 During her treatment, Sophie needed to stop work and now says that since coming back in July, her view on her job has changed.

She said: ‘I do feel differently about work, I have much more empathy towards patients now and feel like I have a unique understanding.

‘I do also have struggles though as I am also a cancer patient and still will be for a long time.

‘The typical NHS with short staff, being overworked and not getting breaks leaves me run down and exhausted.

‘It’s sometimes hard to process looking after patients and supporting patients through cancer when it means running myself into the ground when in reality I probably need the support myself.’

Although working on a cancer ward does sometimes cause Sophie periods of ‘constant fear’, she says that coming back to work has been a good distraction.

Sophie has been told that her cancer is likely to return but now wants to help raise awareness on the devastating disease — and the importance of advocating for your own health.

She added: ‘I’d just love to spread awareness that cancer can affect you at a young age even with no family history, no genetics, no risk factors other than taking the contraceptive pill.

‘Early detection has saved my life so it’s so important to check monthly and push to get things checked out. ‘You are never wasting anyone’s time.’

What is breast cancer?

Breast cancer develops from a cancerous cell which develops in the lining of a duct or lobule in one of the breasts.

When the breast cancer has spread into surrounding breast tissue it is called an ‘invasive’ breast cancer. Some people are diagnosed with ‘carcinoma in situ’, where no cancer cells have grown beyond the duct or lobule.

Most cases develop in women over the age of 50 but younger women are sometimes affected. Breast cancer can develop in men though this is rare.

Staging means how big the cancer is and whether it has spread. Stage 1 is the earliest stage and stage 4 means the cancer has spread to another part of the body.

The cancerous cells are graded from low, which means a slow growth, to high, which is fast growing. High grade cancers are more likely to come back after they have first been treated.

A cancerous tumour starts from one abnormal cell. The exact reason why a cell becomes cancerous is unclear. It is thought that something damages or alters certain genes in the cell. This makes the cell abnormal and multiply ‘out of control’.

Although breast cancer can develop for no apparent reason, there are some risk factors that can increase the chance of developing breast cancer, such as genetics.

What are the symptoms of breast cancer?

The usual first symptom is a painless lump in the breast, although most breast lumps are not cancerous and are fluid filled cysts, which are benign.

The first place that breast cancer usually spreads to is the lymph nodes in the armpit. If this occurs you will develop a swelling or lump in an armpit.

How is breast cancer diagnosed?

If you are confirmed to have breast cancer, further tests may be needed to assess if it has spread. For example, blood tests, an ultrasound scan of the liver or a chest x-ray.

How is breast cancer treated?

Treatment options which may be considered include surgery, chemotherapy, radiotherapy and hormone treatment. Often a combination of two or more of these treatments are used.

How successful is treatment?

The outlook is best in those who are diagnosed when the cancer is still small, and has not spread. Surgical removal of a tumour in an early stage may then give a good chance of cure.

The routine mammography offered to women between the ages of 50 and 70 mean more breast cancers are being diagnosed and treated at an early stage.