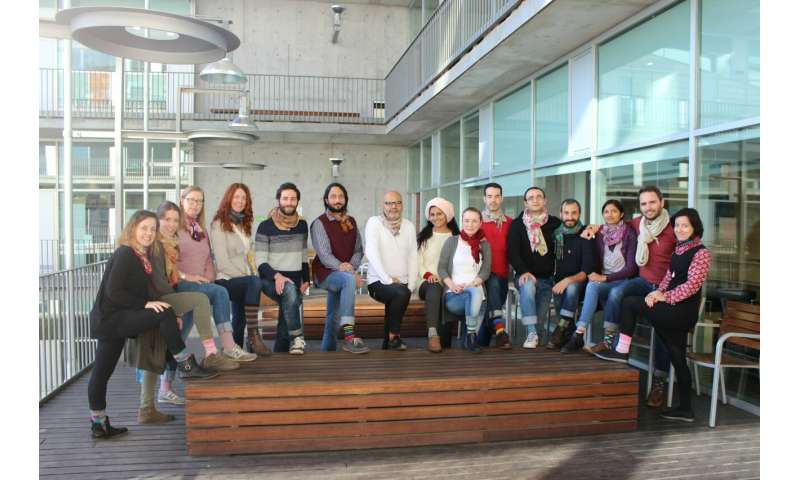 Scientists at the Centre for Genomic Regulation (CRG), part of the Barcelona Institute of Science and Technology (BIST), in Barcelona, Spain, have uncovered the biological details of how cells produce a crucial molecule involved in inflammation, pointing toward a new avenue for the development of anti-inflammatory drugs. The findings are published this month in the journal Developmental Cell.

The team’s research, led by Vivek Malhotra, head of the Intracellular Compartmentation group at the CRG, focuses on IL-1β, a protein released by immune cells in response to danger signals such as bacterial infection or tissue damage, triggering inflammation to fight off infection and aid healing.

Excessive production of IL-1β leads to unwanted inflammation, which has been implicated in a wide range of illnesses including auto-immune, neurodegenerative and cardiovascular diseases. Making sure that IL-1β is produced at the right time and in the right place is therefore vital for health.

Despite its important role in inflammation, there is still a lot of mystery around how much IL-1β is made and how it is released from immune cells. For example, IL-1β lacks the usual molecular “identity badge” found on many other proteins that are exported out of cells, which directs them through the usual processing pathway.

Recent reports have suggested that IL-1β production might be dependent on something known as the unfolded protein response (UPR), a failsafe that prevents abnormal proteins building up inside cells when they are in stressful conditions such as low nutrient levels. But growing evidence points to a role for the UPR in producing proteins under normal conditions, too.

In search of the connection between the UPR and IL-1β production, Malhotra and Marioara Chiritoiu, first author of the study, took a clue from simple slime moulds and yeast that use similar pathways to secrete proteins when they are stressed. One of the key players in this process is known as GrpA, which is very similar to a protein called GRASP55 in humans and mice. 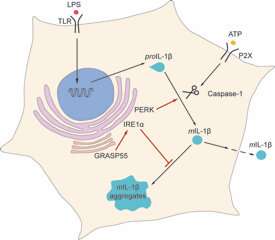 Using genetic engineering techniques, the CRG team created mice lacking the GRASP55 gene and took a close look at their immune cells. Straight away, they noticed that IL-1β was building up in clumps (aggregates) inside the cells instead of being released, meaning that it was no longer able to trigger inflammation. These aggregates are bad news, as they mean that neither IL-1β nor the immune cells in which it is produced can respond properly to inflammation triggers.

The researchers also found that another protein playing an important role in activating the UPR under times of stress, known as IRE1α, was no longer working properly in these cells.

Discovering this crucial connection between the UPR, GRASP55 and IL-1β suggests that interfering with these pathways could be a potential way to control the production and release of this inflammatory molecule.

Drugs that block the UPR are currently being developed as treatments for neurodegenerative diseases involving abnormal proteins, including Alzheimer’s, Parkinson’s and Huntington’s, so it will be interesting to see whether this approach could also be applied for finding new anti-inflammatory therapies.

“These findings are very important for understanding how proteins like IL-1β, which are not secreted using the standard pathway, are released from cells,” says Malhotra.