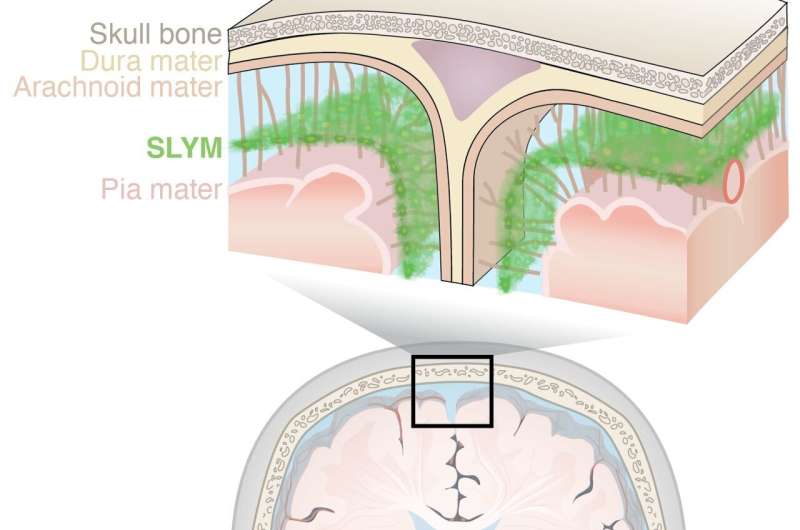 From the complexity of neural networks to basic biological functions and structures, the human brain only reluctantly reveals its secrets. Advances in neuro-imaging and molecular biology have only recently enabled scientists to study the living brain at level of detail not previously achievable, unlocking many of its mysteries. The latest discovery, described today in the journal Science, is a previously unknown component of brain anatomy that acts as both a protective barrier and platform from which immune cells monitor the brain for infection and inflammation.

The new study comes from the labs of Maiken Nedergaard, co-director of the Center for Translational Neuromedicine at University of Rochester and the University of Copenhagen and Kjeld Møllgård, M.D., a professor of neuroanatomy at the University of Copenhagen. Nedergaard and her colleagues have transformed our understanding of the fundamental mechanics of the human brain and made significant findings to the field of neuroscience, including detailing the many critical functions of previously overlooked cells in the brain called glia and the brain’s unique process of waste removal, which the lab named the glymphatic system.

“The discovery of a new anatomic structure that segregates and helps control the flow of cerebrospinal fluid (CSF) in and around the brain now provides us much greater appreciation of the sophisticated role that CSF plays not only in transporting and removing waste from the brain, but also in supporting its immune defenses,” said Nedergaard.

The study focuses on the membranes that encase the brain, which create a barrier from the rest of the body, and keep it bathed in CSF. The traditional understanding of what is collectively called the meningeal layer, a barrier comprised of individual layers known as the dura, arachnoid, and pia matter.

The new layer discovered by the U.S. and Denmark-based research team further divides the space below the arachnoid layer, the subarachnoid space, into two compartments, separated by the newly described layer, which the researchers name the SLYM, an abbreviation of Subarachnoidal LYmphatic-like Membrane. While much of the research in the paper describes the function of SLYM in mice, they also report its actual presence in the adult human brain as well.

The SLYM is a type of membrane called mesothelium, which is known to line other organs in the body, including the lungs and heart. Mesothelia typically surround and protect organs, and harbor immune cells. The idea that a similar membrane might exist in the central nervous system was a question first posed by Møllgård, the first author of the study. His research focuses on developmental neurobiology, and on the systems of barriers that protect the brain.

The new membrane is very thin and delicate, and consists of only one or a few cells in thickness. Yet the SLYM is a tight barrier, and allows only very small molecules to transit; it seems to separate “clean” and “dirty” CSF. This last observation hints at the likely role played by SLYM in the glymphatic system, which requires a controlled flow and exchange of CSF, allowing the influx of fresh CSF while flushing the toxic proteins associated with Alzheimer’s and other neurological diseases from the central nervous system. This discovery will help researchers more precisely understand the mechanics of the glymphatic system, which was the subject of a recent $13 million grant from the National Institutes of Health’s BRAIN Initiative to the Center for Translational Neuromedicine at the University of Rochester.

Discovery of the SLYM opens the door for further study of its role in brain disease. For example, the researchers note that larger and more diverse concentrations of immune cells congregate on the membrane during inflammation and aging. When the membrane was ruptured during traumatic brain injury, the resulting disruption in the flow of CSF impaired the glymphatic system and allowed non-central nervous system immune cells to enter the brain.

These and similar observations suggest that diseases as diverse as multiple sclerosis, central nervous system infections, and Alzheimer’s might be triggered or worsened by abnormalities in SLYM function. They also suggest that the delivery of drugs and gene therapeutics to the brain may be impacted by SLYM function, which will need to be considered as new generations of biologic therapies are being developed.