Arrays of metal electrodes are often used in medical procedures that require monitoring or delivering electrical impulses in the body, such as brain surgery and epilepsy mapping. However, the metal and plastic materials that comprise them are stiff and inflexible while the body’s tissues are soft and malleable. This mismatch limits the places in which electrode arrays can be successfully used, and also requires the application of a large amount of electrical current in order to “jump” the gap between an electrode and its target. 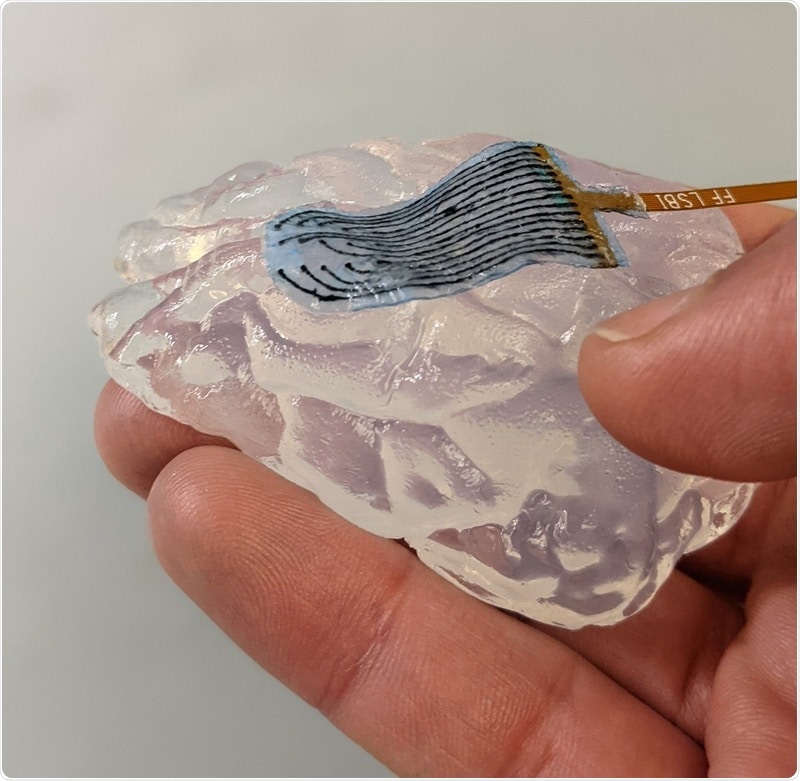 Inspired by the unique physical properties of living human tissues, a team of scientists from Harvard’s Wyss Institute and John A. Paulson School of Engineering and Applied Sciences (SEAS) has created flexible, metal-free electrode arrays that snugly conform to the body’s myriad shapes, from the deep creases of the brain to the fibrous nerves of the heart. This close embrace allows electrical impulses to be recorded and stimulated with lower required voltages, enables their use in hard-to-reach areas of the body, and minimizes the risk of damage to delicate organs.

“Our hydrogel-based electrodes beautifully take the shape of whatever tissue they’re placed on, and open the door to the easy creation of less invasive, personalized medical devices,” said first author Christina Tringides, a graduate student at the Wyss Institute and Harvard Biophysics Program. The achievement is reported in Nature Nanotechnology.

A medical device inspired by the human body

One of the hallmarks of all living tissues, particularly the brain and spinal cord, is that they are “viscoelastic” – that is, they will spring back to their original shape if pressure is applied to them and then released, but will deform permanently into a new shape if pressure is continuously applied. One common example is ear gauging, in which placing a larger and larger gauge into a pierced ear stretches out the hole in the earlobe over time.

Tringides and her team realized that alginate hydrogels, which have been developed at the Wyss Institute for a number of functions including surgical adhesives and single-cell encapsulation, are also viscoelastic, and reasoned that they should be able to tune them to match the viscoelasticity of tissues. Given her background in neural engineering, Tringides decided to try to create fully viscoelastic electrodes that could match that of the brain for safer and more effective neuroelectric monitoring. Standard electrodes are made of metal conductive arrays contained within a thin plastic film, and are up to a million times stiffer than the brain.

The team’s first task was to test whether their alginate hydrogels could successfully conform to living tissues. After experimenting with different types of hydrogels, they settled on a version that most closely matched the mechanical properties of brain and heart tissue. They then placed their hydrogel onto a fake “brain” made from gelatin-like agarose, and compared its performance to that of a plastic material and an elastic material.

The alginate hydrogel had double the amount of contact with the underlying mock brain compared to the other materials, and was even able to get down into some of the brain’s many deep grooves. When they left the materials on the mock brains for two weeks, the elastic material had substantially moved from its original location and immediately sprang back into its original shape when removed from the underlying mock tissue. In contrast, the alginate hydrogel stayed in position the whole time and retained its brain-like shape after removal.

Going with the flow

Now that the team had a material that could flex and flow around tissues, they had to invent an electrode that could do the same thing. The vast majority of electrodes are made of metal because metals are highly electrically conductive – but also very stiff and inflexible.

After many experiments and late nights in the lab, the team identified a combination of graphene flakes and carbon nanotubes as their top candidate. “Part of the advantage of these materials is their long and narrow shape. It’s a bit like throwing a box of uncooked spaghetti on the floor – because the noodles are all long and thin, they’re likely to cross each other at multiple points. If you throw something shorter and rounder on the floor, like rice, many of the grains won’t touch at all,” said Tringides.

When these spaghetti-like materials were embedded into the alginate hydrogels, they crisscrossed their way through the gel to create porous, conductive pathways through which electricity could travel. These flexible electrodes could be bent more than 180 degrees and tied into knots without breaking, making them a perfect partner for the viscoelastic alginate hydrogel.

To put it all together, the team surrounded their new conductive electrode with an insulating layer of a self-healing silicone polymer called PDMS, which was then sandwiched between two layers of the alginate hydrogel. The resulting device was highly flexible, and could be stretched up to 10 times its length without breaking or tearing. When living brain cells such as astrocytes and neurons were grown on the devices, the cells displayed no damage or other negative effects, suggesting that the device could be safely used on living tissues.

An alternative array for safer surgeries

The team then tested their new viscoelastic electrode array in real-world conditions by attaching it to a mouse heart. The device stayed in place on the tissue as it moved, and remained intact over tens of thousands of muscle contractions. The researchers then scaled up, attaching their device to a rat brain, a rat heart, and a cow heart, all of which experienced no damage and no slipping of the device, even when bent more than 180 degrees. In contrast, a commercial electrode array did not stay in contact with the cow heart when bent more than 90 degrees.

Finally, the viscoelastic electrode array was successfully used to both stimulate nerves and record electrical activity in vivo. When the device was attached to a living mouse’s hind leg, the researchers successfully stimulated different muscles to contract by varying which of several electrodes delivered the stimulation. They then attached their device to a mouse’s heart and a rat’s brain during surgeries. The electrical activity of the heart and the brain were successfully recorded by the device, which was bent to attach to hard-to-reach areas and caused no injury to the animals during use.

“The viscoelasticity of this device marks a new direction in medical devices, which are typically designed to be purely elastic,” said corresponding author Dave Mooney, Ph.D., who is a Wyss Core Faculty member and leader of the Institute’s Immuno-Materials platform. “By taking the opposite approach, we can interface with the body’s tissues much more closely, allowing a more functional interface without damaging the tissue.” Mooney is also the Robert P. Pinkas Family Professor of Bioengineering at SEAS.

The team is continuing to develop their devices, and is currently working to validate them in larger animals in vivo with the ultimate goal of making them available for use during medical procedures such as brain tumor removal surgery and epilepsy mapping. They also hope that this new technology will enable electrical recording and stimulation to be performed in parts of the body that are currently inaccessible by commercially available devices.

I love the out-of-the-box thinking this team used to address the problem of semi-rigid electrodes by challenging the assumption that they had to be made of metal and solid plastic to be effective. This kind of design thinking, problem solving, and appreciation for the importance of matching the mechanics of living systems is what we strive to cultivate and encourage at the Wyss Institute, and this is a great example of the benefits that can be reaped as a result.”

Additional authors of the paper include Nicolas Vachicouras, Alix Trouillet, Florian Fallegger, and Stéphanie P Lacour from École Polytechnique Fédérale de Lausanne, Switzerland; Irene de Lázaro, Hua Wang, Bo Ri Seo, and Alberto Elosegui-Artola from the Wyss Institute and SEAS; Yuyoung Shin and Cinzia Casiraghi from the University of Manchester, UK; and Kostas Kostarelos from the University of Manchester and the Catalan Institute of Nanoscience and Nanotechnology, Spain.