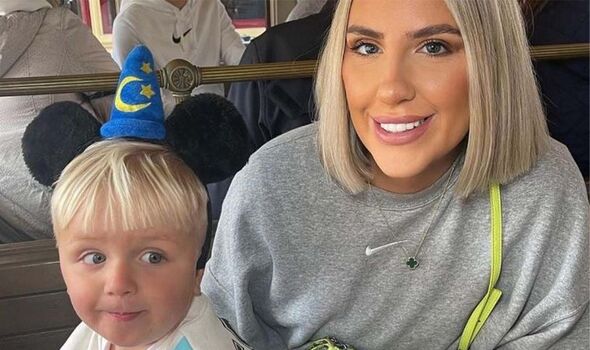 A mum whose son had Strep A has shared a trick for getting children to take “horrid” antibiotics. Kaydee Gilliard says her son Aaro, three, was struggling to swallow his medicine after falling ill so she had to get creative.

She said he could still taste it even if mixed with a yoghurt or his usual drink. After eventually finding some ways to get it down him, she decided to share her tips to help other parents.

In a Facebook post, she said: “I can almost guarantee there’s a mum somewhere pulling her hair out trying to get these horrid red antibiotics down their poorly child today (it was me). I thought I would share some tips on how I got Aaro to take his with his Strep A / RSV this week:

“1 – Put it on a spoon with some sprinkles and then the child thinks they are magic. I got this one online and tried it. This worked once but after he tasted them the first time it was game over. Might work for others.

“2 – Put them in one of Aldi’s smoothie cartons. I would recommend pouring it into their water bottle if you don’t have a dropper thing that fits into the straw bit. The water bottle worked the whole week!

“3 – A bowl of Coco Pops then add extra chocolate milkshake powder into the milk so it’s more chocolatey – This I did on a fluke and it worked really well in the morning doses!”

Kaydee, 31, who works in marketing, told the Manchester Evening News: “I posted the tips to see if it might help someone as I really struggled. It wasn’t the usual yellow stuff, it’s this really strong tasking red antibiotics for the Strep A.”

Kaydee said Aaro first became unwell two weeks ago. He lost his appetite, was more clingy and had a high temperature. He then developed a cough and ‘his tongue was covered in white then it went like raspberry’.

“Once it was a few days on, he got a tongue like a strawberry and red patches on his face,” she said. “His rash was only mild, but it felt like rough bumps, like sand on his skin.”

She said struggling to get him to take his medication left her feeling “like a failure as a parent”.

“Especially when you’re told they can be admitted into a children’s ward with ‘failure to administer medication’,” she said.

Kaydee added that it had proved to be a mission to get the treatment for her son in the first place. Like many parents who have been struggling to get hold of commonly prescribed treatments such as penicillin and amoxicillin amid an unseasonably early rise in Strep A infections, she found herself driving around trying to find a pharmacy with the latter in stock.

Thankfully Aaro has made a full recovery and was back in nursery yesterday, just in time to enjoy some Christmas fun.

While the Royal Pharmaceutical Society has said that pharmacists are “under enormous pressure” and “struggling to get supplies”, the government is denying there is any shortage.

A Department of Health and Social Care spokesperson said: “There is no supplier shortage of antibiotics available to treat Strep A. We sometimes have surges for products and increased demand means some pharmacies are having difficulties obtaining certain antibiotics.”