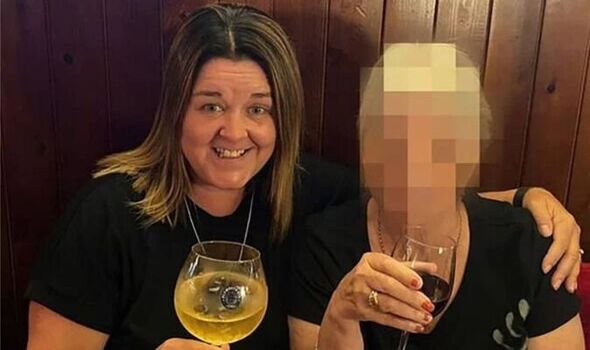 Anne, 74, pays almost £42,000 a year for accommodation, which would be free for those with cancer and other serious diseases. Her daughter Paula Yarnall has accused Forest Hill Care Home in Nottinghamshire of neglect after the alleged mistreatment.

Paula was looking forward to their reunion in December after Covid forced them apart but was appalled to find Anne lying in dirty bedsheets with blackened feet.

She said her mother’s lips were almost blue with cold and her hands frozen as she shivered in a T-shirt in winter temperatures. And she told how the smell of urine in Anne’s bedroom was so strong that it was difficult to breathe and made her eyes sting.

She says she also found urine-soaked clothes in cupboards and her long-time vegetarian mum was given meals containing meat.

Paula said: “It’s absolutely soul-destroying for a member of your family to be suffering in this way and you’re helpless to do anything. We left her in the care of people who are being paid to do a job.”

“Pensioners are paying through the nose for their care but staff are not caring.”

“My mum was forced to sell the house she had lived in since 1953 to pay Forest Hill Care Home almost £1,000 a week for supposedly outstanding care.”

“Her feet were absolutely covered with ingrained dirt, which was embedded into her feet.”

“She obviously had not been helped to shower or bathe for a long time. Her bedding was full of this dirt and her toenails were all overgrown.”

“She was bruised and thin, not wearing her own clothes, and obviously this treatment affected her health and her dementia.”

The care home has responded to these claims and said they should be considered in the context of a complex case and the need to respond to a resident’s wishes.

Paula went on: “She was an emergency admission from hospital in January 2021.

“I wasn’t allowed in because of Covid but I sent the care home managers a full written brief detailing her likes and dislikes and telling them what kind of person my mum is. All of that was ignored.”

“After the strain of looking after her at home for eight months and because the home was rated outstanding and specialised in the care of people with dementia, the whole family was relieved when Forest Hill was suggested. But her stay turned into a nightmare.”

The Daily Express is calling on the Government to keep its 2019 election promise and double dementia funding in the hope of finding medicines and cures.

Anne inherited a two-bed semi in Worksop, Notts, from her grandmother and lived there for almost 70 years until she sold it last year for £103,000 to pay care bills.

Paula, of Arnold, Notts, added: “After months apart through the pandemic, the distress of seeing her this way has been overwhelming.”

“My mum’s room has been filthy and only cleaned when I’ve cleaned it. Last week there was an inspection announced by the Care Quality Commission. I went in the day before and found staff cleaning and scrubbing. It’s a joke. How can any watchdog do a proper inspection when they announce in advance that they’re turning up? The home has serious failings. It’s unacceptable.”

Barchester Healthcare, which owns the Forest Hill care home in Worksop, has apologised to the family and said two staff members have been suspended pending an investigation.

A spokesman said: “We are in contact with the family and have taken a number of actions while also having expressed sincere apologies.”

“Two members of staff have been suspended while we conduct an investigation and we’ve notified the Care Quality Commission of the concerns raised. Our senior team has reviewed cleaning procedures and care plans and reiterated to the team what is needed.”

“Given the complexity of this case, some of the claims should be taken in context of the staff in the home wanting to respect a resident’s wishes.”

“However, we are taking this extremely seriously and will do everything possible to ensure this is addressed in full.”

Jayne Connery, who runs Care Campaign For The Vulnerable, is calling for cameras in homes to ensure transparency.

She said: “People with dementia cannot tell people about neglect or abuse. So it is vital the industry looks at the benefits for both the staff and families and more so for the vulnerable people living in care homes. We urge families not to consider care homes unless they have safety monitoring in place.”

“Insist with local authorities that they support care packages at home.”

Paula and her family are trying to move Anne to another home. But they will have to find £1,600 a month for a “top-up” fee alongside a £1,350-a-week main charge.

The Conservative Party’s 2019 manifesto included a pledge to double investment into dementia to £160million per year for 10 years and speed up drug trials.

But more than two years after the policy was announced – by then health secretary Matt Hancock in the Daily Express – the cash injection dubbed the “Dementia Moonshot” has not materialised. Instead, government spending on research has fallen, prompting fears progress will halt and young scientists will leave the sector.

Kate Terroni, chief inspector of adult social care at the CQC, said: “CQC has been made aware of concerns regarding Forest Hill in Worksop, Nottinghamshire, and we have taken swift action to carry out an unannounced inspection. We take all concerns of this nature very seriously and we are taking regulatory action at this service to ensure people are safe.

“As an inspection is ongoing we are not able to comment further, however we will publish a full report when it has gone through our quality review process.”

“All information we receive informs our monitoring of services and future inspections to ensure people are receiving safe care.”

“Where there is evidence people are at immediate risk of harm, we will not hesitate to take action by carrying out an inspection at the service and – where necessary – take further regulatory action.”

I have raised many formal complaints about the care and treatment of my mum.

Having only been allowed to visit since December 13 last year due to pandemic rules, I’m appalled at what has been going on behind closed doors.

The photo of my mum’s feet was taken recently when I visited with my sister. The staff said this was from one evening of her “walking around the home”. If that’s the case, I suggest the home has a serious hygiene problem.

I have purchased four pairs of slippers for mum over the last 12 months and not a single pair is in her room or available to her.

When I complained about why my mum was still being served meat despite being a vegetarian, the manager told me that my mum “chooses this”. But my mum has dementia. How can she choose? Why does this “personal choice” become the responsibility of the person with dementia?

I complained that my mum’s hands and lips were blue and that she was extremely cold to the touch and wearing just a T-shirt when the home’s heating system had broken down in December. But the manager told me that staff dressed my mum appropriately but that my mum “removes her clothes”.

This is just nonsense as my mother has been unable to dress or undress herself for many months.

Again the blame was passed back on to my mum.

When I visited in February I was met by the most abhorrent smell of urine. When I raised this with staff I was told that they can’t smell anything as they are wearing masks all day. What sort of an answer is that?

Our family cannot understand how the home has managed an outstanding Care Quality Commission rating.

When penning these comments, it’s difficult not to let our absolute anger and despair creep into the text. Care Campaign For The Vulnerable has for many years been raising serious failings with care homes.

We have been imploring them to consider safety monitoring as an antidote to possible abuse, wilful neglect and simple carelessness. Yet, the vast majority have refused to adopt such systems, hiding behind the “privacy” argument.

The automatic response seems to be one of concealment, with an occasional apology when a raised incident is verified. Families have had to resort to hidden cameras or taking photos when visiting to ensure evidence is available.

With very few exceptions, providers don’t seek to be proactive about ensuring care delivery is of a high standard.

Large corporate care home companies point to their audits and the processes in place to monitor services. Yet they continue to be exposed for serious failings.

And this is despite inspection ratings often suggesting they have a good or outstanding service. That points to the Care Quality Commission watchdog being at best reactive and at worst woefully inadequate.

Many companies are quick to tell a good news story or reveal a positive inspection but the reality is much darker. Well-paid executives simply don’t care about your mum or dad. They know that safety monitoring options such as CCTV cameras have been available for years, yet they completely ignore their use.

They don’t want you to know what is happening in care homes, which means nothing will change and physical and mental neglect and abuse will continue. We would urge families not to consider care homes unless they have safety monitoring in place.

We would also urge families to begin naming and shaming companies and to become much more outspoken. CCFTV has urged ministers to mandate safety monitoring systems in care homes.