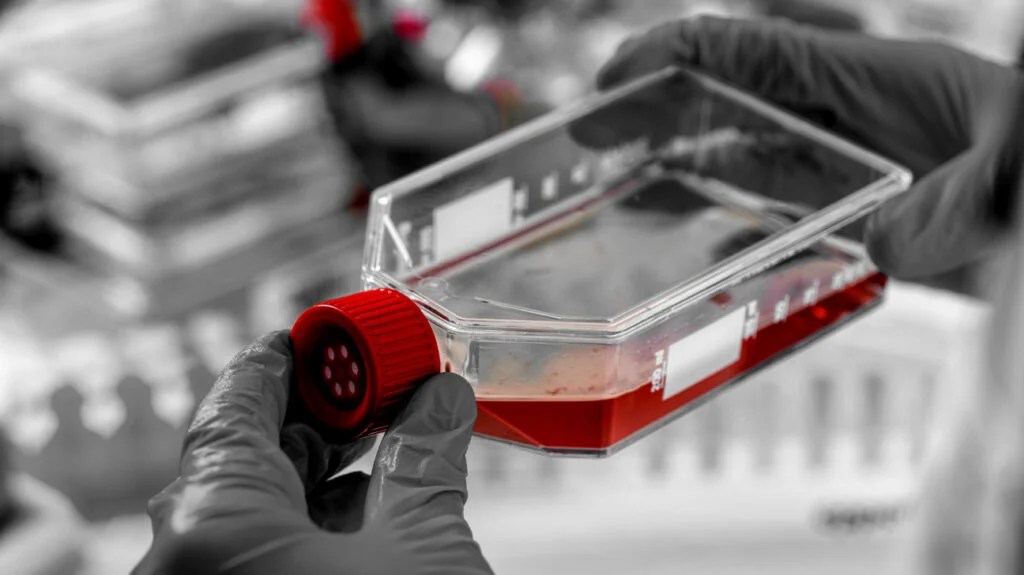 Although treatments are available to help lessen the many symptoms of MS, there is currently no cure. And while the life expectancy for people with MS has increased over the years, they have an average life span between 25 to 35 years following diagnosis.

Now researchers from the IRCCS San Raffaele Scientific Institute in Milan, Italy, show transplanting fetal stem cells into the spinal cords of people with progressive MS helped increase the number of neuroprotective molecules in their spinal fluid after three months.

And two years after the treatment, study participants provided with higher doses of transplanted stem cells did not experience as much reduction in the brain’s gray matter compared to those given a lower dose.

The study appears in the journal Nature Medicine.

What are stem cells?

Scientists use stem cells to help:

Stem cell therapy is currently under evaluation as a treatment for MS by other researchers and other diseases, including rheumatoid arthritis, type 1 diabetes, Parkinson’s disease, and certain cancers.

Medical News Today spoke with Dr. Gianvito Martino, the study’s lead author, professor of experimental biology and vice-rector for research and third mission at the San Raffaele Vita-Salute University in Milan, and scientific director of the San Raffaele Scientific Institute.

Dr. Martino said researchers decided to examine the use of fetal stem cells as MS treatment based on previous studies they had conducted:

“In preclinical studies performed in mouse models of MS (EAE) we showed that ‘syngeneic’ adult neural stem cells — cells obtained from the same mouse strain — might be therapeutically efficacious in slowing disease progression.

In humans, fetal neural stem cells — and in general all types of stem cells — are considered bona fide like [an] adult and not embryonic stem cells.”

“Finally, after (the) mouse studies, we performed a study in a monkey model of MS,” Dr. Martino continued. “In this model, we transplanted human fetal neural stem cells very similar to those used later in patients. Results were superimposable to those obtained in mice.”

For this study, Dr. Martino and his team transplanted stem cells obtained from the nervous system of a fetus donated by its mother for scientific research. The team injected neural stem cells into the spinal cords of 12 people with progressive MS between 18 to 55 years old. Each participant received four different doses.

Researchers found that all participants had increased amounts of neuroprotective molecules in their spinal fluid three months after treatment.

“Preclinical studies demonstrated that once injected in the spinal fluid via lumbar puncture, adult/fetal neural stem cells can reach inflammatory demyelinated areas of the brain and the spinal cord, and once reached those areas might protect the tissue from further damage by remaining undifferentiated and by releasing neuroprotective and anti-inflammatory molecules,” Dr. Martino detailed.

“The molecules detected are the molecules we think might act to slow disease progression,” he added.

And researchers did report that while participants continued to be bedridden, their MS symptoms did not worsen over two years.

“As we demonstrated in preclinical animal studies, the treatment should be able to foster regeneration of the central nervous system,” Dr. Martino said. “The release of neuroprotective molecules should be able to provide trophic support to endogenous neural cells — oligodendrocytes and neurons — surviving to the tissue damage or only partially damaged by the disease.”

“This is the way we think we might try to halt disease progression,” he continued. “The cell administration route is easy to access and therefore the treatment can be repeated over the years.”

MNT also spoke with Dr. Kalina Sanders, a neurologist at Baptist Health in Jacksonville, FL, about this study, which she said gave her cautious optimism:

“It is an early-phase study (that) shows in a small number of patients that it is potentially safe to transplant fetal stem cells intrathecally. This gives me optimism for future evaluation and study in this therapeutic option for people or progressive [diseases]. To find a therapeutic option for patients with progressive multiple sclerosis would be a significant step in managing multiple sclerosis.”

Dr. Sanders said she found the science behind the study interesting and exciting.

“The neural stem/precursor cell has the potential to provide neuronal repair and neuroprotection — this is essential for progressive disease,” she continued. “However, the feasibility, especially intrathecally, is very limited at this time. Obviously, the availability and access to fetal stem cells is a significant barrier, especially in the United States.”

“An additional roadblock includes the route of administration,” Dr. Sanders added. “This may not be as desirable as other routes like oral or intravenous. However, if the treatment proves to (be) effective, safe, and a one-time occurrence, the benefits would outweigh the risk.”

For the next steps in this research, Dr. Sanders said she would like to see a larger comparative study.

“However, the next phase study would likely define the appropriate dose and protocol,” she said. “Continued evaluation of (the) safety of intrathecal stem cell transplantation is warranted. A larger cohort may reveal adverse events not seen in this study.”

“In progressive disease, the goal would be to see if it was better than the natural history of the disease or other approved therapeutic options,” Dr. Sanders concluded. “It would (be) great to see a treatment that actually improves (a) patient’s function.”