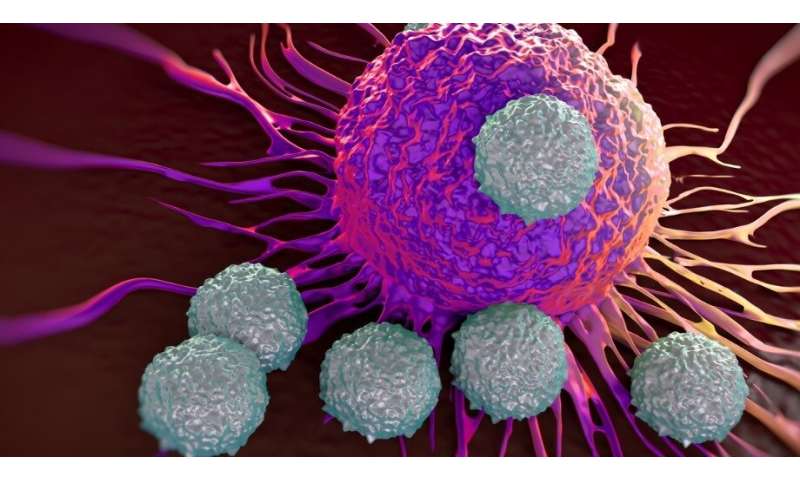 Scientists at Scripps Research have discovered a molecule that can activate a natural immune-boosting protein called STING. The findings mark a key advance in the field of oncology, as the STING protein is known for its strong antitumor properties.

STING (short for STimulator of INterferon Genes) marshals the immune system against viral and cancerous invaders and, because of its role in promoting antitumor immunity, has garnered enthusiastic interest from drug developers.

However, STING’s natural activators in the body are unstable DNA-related molecules that do not last long in the bloodstream. That has hindered the development of treatments based on them, and has prompted a search for a hardier STING-activating small molecule—one that can circulate in the blood and work against tumors “systemically,” wherever they may exist in the body.

The Scripps Research scientists, who report their finding in Science on August 20, screened a set of suitable small molecules with diverse structures and identified several that activate STING. After modifying one of these molecules to optimize its properties, they found that delivering it systemically into mice with an injection greatly reduced the growth of an aggressive form of melanoma.

The discovery raises the possibility of a circulating drug that could activate STING and suppress a wide range of cancers.

“A systemic STING-activating molecule could have considerable utility, and not only as a therapeutic for cancer and infectious disease, but also as a probe for studying STING-dependent antitumor immunity and a host of other STING-related biological processes,” says co-senior author Luke Lairson, Ph.D., an associate professor in the Department of Chemistry at Scripps Research.

Lairson and colleagues found that their optimized STING-activator, which they named SR-717, appears to activate the STING protein in the same way as its natural activators in the body. Using X-ray crystallography to image the interaction at atomic scale, they showed that both SR-717 and a known natural activator bind to the same site on STING and induce the same shape-change in the protein.

In an animal model of aggressive melanoma, SR-717 dramatically suppressed tumor growth, prevented metastasis, induced the presentation of tumor molecules to the immune system, and robustly boosted levels around tumors of CD8+ T cells and NK cells—both of which are known to be among the immune system’s heaviest antitumor weapons. At this effective dose, there was no evidence of significant adverse side effects on the animals.