“The emergence of SARS-CoV-2 variants has led to growing concerns over increased transmissibility and the ability of some variants to partially escape immunity,” writes the team from Moderna Inc. in Cambridge, Massachusetts.

Now, the researchers have compared the neutralizing activity of sera from individuals immunized with the mRNA-1273 vaccine against emergent variants and the wild-type SARS-CoV-2 virus (designated D614G).

The team reports that vaccine-elicited neutralizing antibody titers against the B.1.1.7 (Alpha) variant of concern were comparable to those elicited against D614G.

However, all variants remained susceptible to mRNA-1273-elicited serum neutralization.

Darin Edwards and colleagues say the findings highlight the need to continually assess the protection conferred by mRNA-1273 against emergent variants to inform any vaccine modifications that are needed in the future.

“This may help to mitigate the ongoing spread of SARS-CoV-2 and the emergence of new variants,” they write.

A pre-print version of the research paper is available on the bioRxiv* server, while the article undergoes peer review. 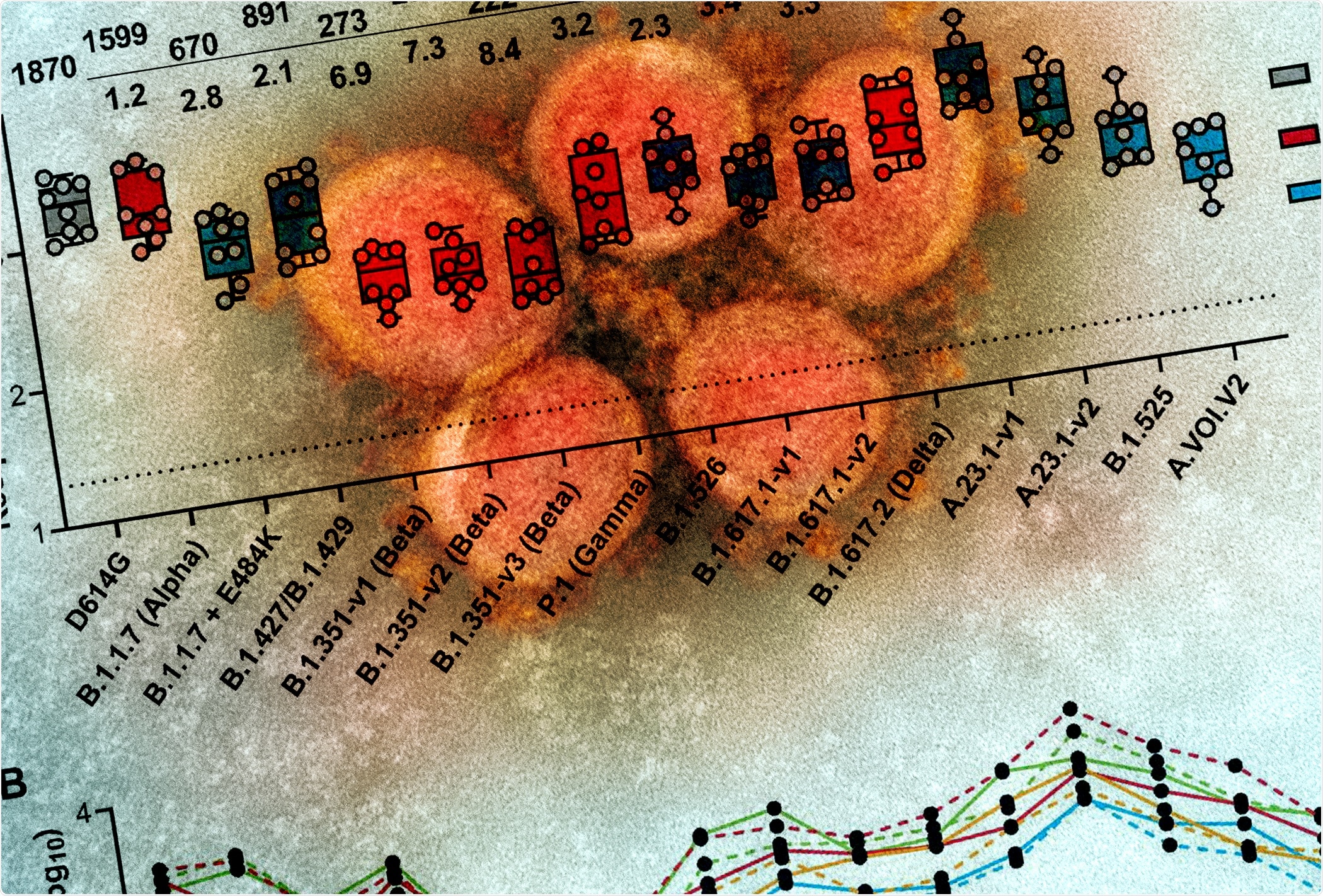 Since the COVID-19 outbreak first began in late December 2019, several SARS-CoV-2 variants of interest (VOIs) and variants of concern (VOCs) have emerged. These lineages contain mutations that confer increased transmissibility and partial escape from infection or vaccine-induced immunity.

Importantly, the B.1.617.2 lineage has been associated with an increased transmission rate, reduced efficacy of monoclonal antibody treatment, and reduced susceptibility to neutralizing antibodies.

Edwards and colleagues previously reported that Moderna’s mRNA-1273 vaccine, which is based on the original SARS-CoV-2 strain isolated in Wuhan in China, elicited high neutralizing antibody titers among phase 1 clinical trial participants and was highly effective at preventing symptomatic and severe COVID-19.

However, another study Edwards was involved in found that some VOCs or VOIs, including B.1.351 and P.1, reduced neutralizing antibody titers in a pseudovirus-based model.

What did the current study involve?

“Here we provide an update on the neutralization activity of vaccine sera against several newly-emerged variants, including the Delta variant B.1.617.2,” says the team.

The researchers used sera samples collected from eight phase 1 clinical trial participants who had received 100µg of the mRNA-1273 vaccine on a prime-boost regimen.

What were the results?

The B.1.1.7 variant only had a minimal effect on neutralizing antibodies titers, which were reduced by just 1.2-fold compared with titers against D614G.

However, all variants remained susceptible to mRNA-1273–elicited serum neutralization, says the team.

Of all the variants tested, the most significant effect on neutralization titers was observed for A.VOI.V2 and B.1.351-v3, which decreased by 8.0-fold and 8.4-fold, respectively. 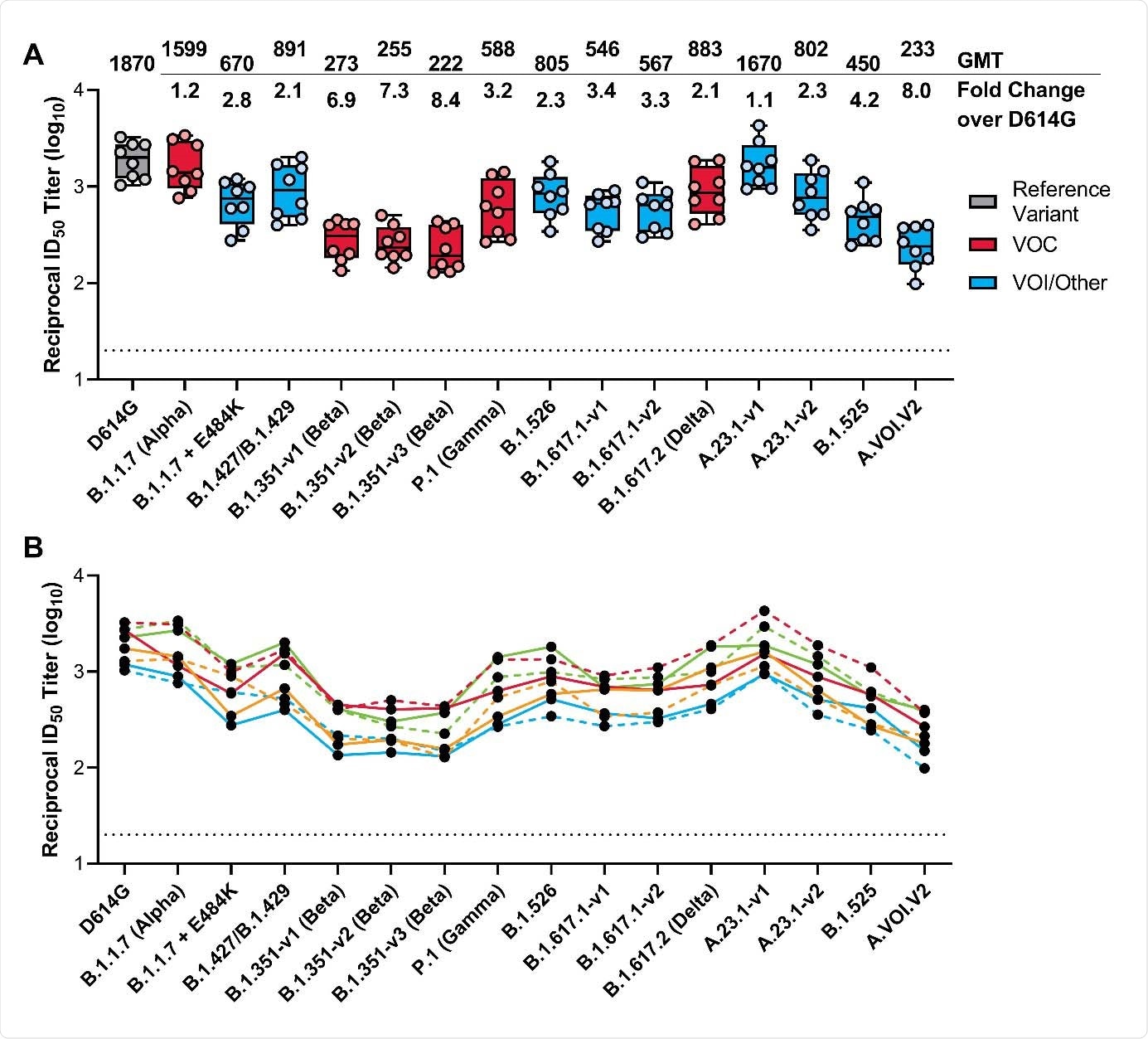 Neutralization of SARS-CoV-2 Pseudoviruses in Serum Samples. Serum samples were obtained from participants in the mRNA-1273 vaccine phase 1 trial on day 36 (7 days post dose 2). A recombinant vesicular stomatitis virus–based pseudovirus neutralization assay was used to measure neutralization. The pseudoviruses tested incorporated D614G or the spike substitutions present in B.1.1.7 (Alpha), B.1.1.7 + E484K, B.1.427/B.1.429, P.1 (Gamma), B.1.351-v1 (Beta), B.1.351-v2 (Beta), B.1.351-v3 (Beta), B.1.526, B.1.617.1-v1, B.1.617.1-v2, B.1.617.2 (Delta), A.23.1-v1, A.23.1-v2, B.1.525, and A.VOI.V2 (Table 1). The reciprocal neutralizing titers on the pseudovirus neutralization assay at a 50% inhibitory dilution (ID50) are shown. In Panel A, boxes and horizontal bars denote the interquartile range and the GMT, respectively. Whisker end points are equal to the maximum and minimum values below or above the median at 1.5 times the IQR. The GMT fold change over D614G for each variant is shown below. In Panel B, the colored lines connect the D614G and variant neutralization titers in matched samples. In both panels, the dots represent results from individual serum samples and the black horizontal dotted line represents the lower limit of quantification for titers at 20 ID50. GMT, geometric mean titer; ID50, 50% inhibitory dilution factor. VOC, variant of concern; VOI, variant of interest.

What did the authors conclude?

“These data emphasize the need to continually assess the ability of mRNA-1273 to confer protection against prevalent and emergent VOIs and VOCs,” says Edwards and the team.

“Such data are crucial to inform necessary modifications to COVID-19 mRNA vaccines going forward, which may help to mitigate the ongoing spread of SARS-CoV-2 and the emergence of new variants,” they conclude.

Sally first developed an interest in medical communications when she took on the role of Journal Development Editor for BioMed Central (BMC), after having graduated with a degree in biomedical science from Greenwich University.