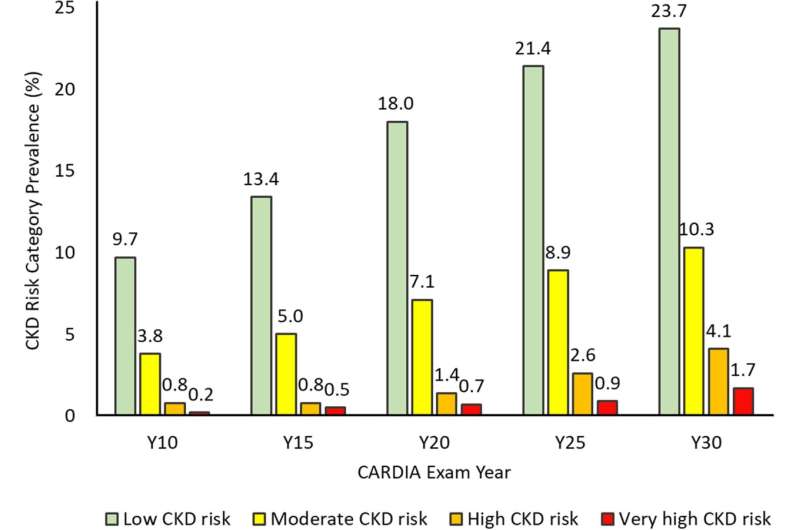 Researchers from the University of Minnesota School of Public Health (SPH) and Medical School found that 27- to 41-year-olds who experienced kidney function decline tended to have accelerated progression to more severe chronic kidney disease (CKD) and higher risk of cardiovascular disease and death in their middle age, according to a new study, published in the Journal of the American Heart Association.

The researchers examined data from 4,382 people participating in the Coronary Artery Risk Development in Young Adults (CARDIA) cohort study, tracking test results over a period of 20 years. Study participants ranged in age from 27-41, with an average age of 35 when the study began. Importantly, the researchers tracked the rate at which people in the study progressed through levels of risk for CKD. The key findings of the study are:

“This study reinforced the fact that young adulthood is a really critical time for clinical attention to the state of the kidneys,” said study co-lead author David Jacobs, a professor at SPH. “People who started with a higher CKD stage were more likely to progress to more advanced CKD stages much faster than their peers who started with no CKD or a milder stage of it.”

Another interesting finding was the association of CKD stages with cardiovascular disease but not death was explained to some extent by several risk factors, particularly hypertension and diabetes. Whether identified with such other risk factors or in isolation, the findings imply that excess excretion of albumin—a blood plasma protein synthesized in the liver—is an early warning sign for future disease.

“These findings indicate routine monitoring, including of urinary albumin excretion, starting in young adulthood holds promise for initiating and reinforcing prevention of kidney disease, cardiovascular disease, and even death,” according to study corresponding author Daniel Duprez, a professor in the U of M Medical School.

The researchers plan to expand on this study to further explore risk factors for CKD progression. They will also conduct a study to analyze racial disparities in CKD disease and surrounding issues.