Man, 60, needs a two-inch Mother’s Day cake decoration removed from his food pipe a week after he unknowingly swallowed it

A man had a two inch-long Mother’s Day cupcake topper removed from his throat after he accidentally swallowed it.

The unidentified 60-year-old had no idea the decorative cake piece was lodged in his throat after scoffing the cake.

It was only spotted a week later, when he turned up at A&E complaining of a sore throat, fever and difficulty swallowing.

Doctors discovered a lodged ‘pink foreign body’ which had cut through the wall of his food pipe.

In some cases, such an accident can lead to death. But the man was able to return home after a brief hospital stay. 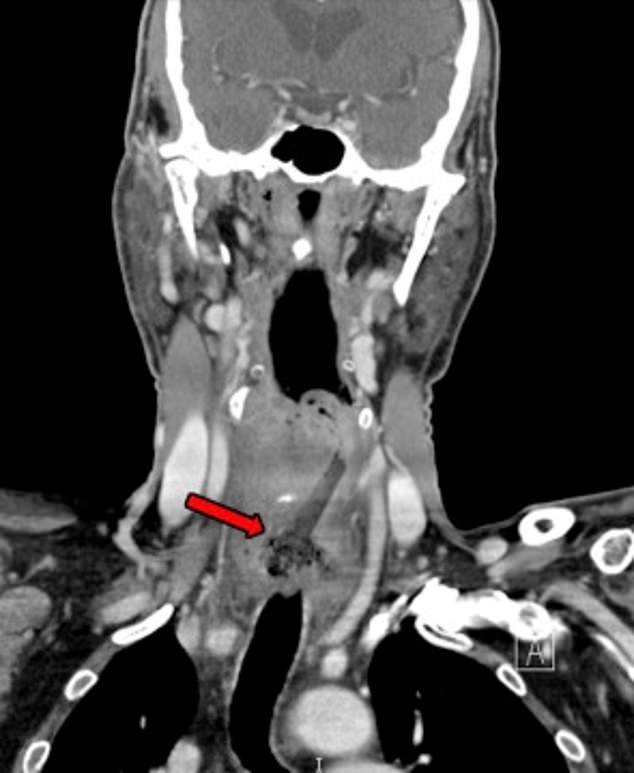 An unnamed 60-year-old man had a two inch-long Mother’s Day cupcake topper removed from his throat after he accidentally swallowed it. It was lodged in his food pipe 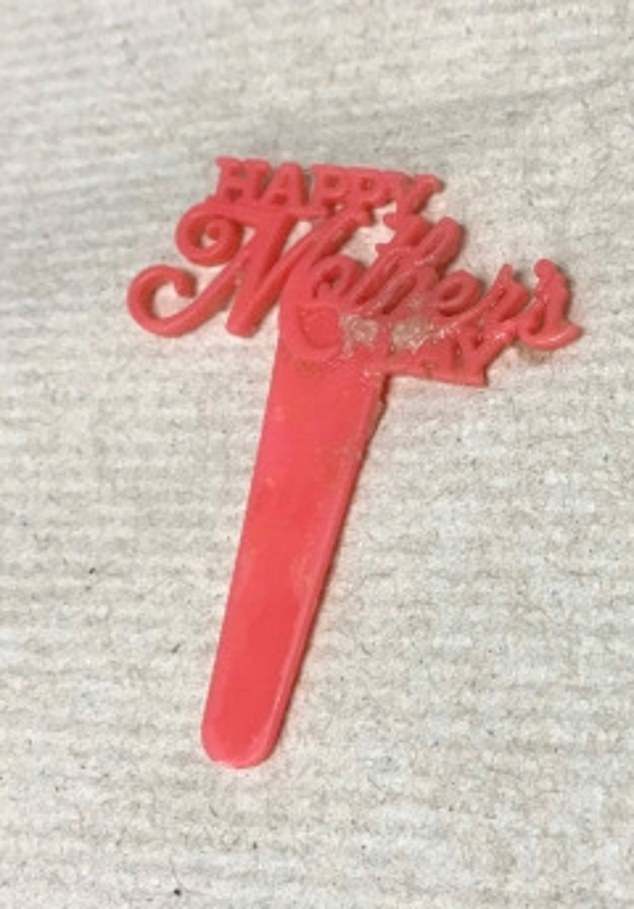 Doctors at Johns Hopkins University School of Medicine, Baltimore, treated the patient and reported it in The Journal of Emergency Medicine.

He turned up to the emergency department complaining of a sore throat and a ‘foreign body sensation’.

Upon questioning, the man told doctors his symptoms had started about a week prior, after he scoffed a cupcake on Mother’s Day.

The man had already visited a different ER for his throat discomfort, but he was discharged after an X-ray of his neck showed no abnormalities.

But at Johns Hopkins, a CT scan was ordered, which produces images of the chest.

A ‘5cm foreign body’ could be seen in his oesophagus, which was inflamed and likely causing the man a lot of pain.

WHAT IS THE DANGER OF A TEAR IN THE FOOD PIPE?

A tear in the oesophagus, called oesophageal perforation, can lead to free fluid and air leaking into the chest cavity and organs.

Severe complications include dehydration, infections, which can lead to sepsis, fluid on the lungs, a collapsed lung or cardiac arrest.

Symptoms often revolve around a high fever, shortness of breath, and shock.

Boerhaave’s syndrome, medically known as spontaneous oesophageal rupture, is when the oesophagus ruptures.

The condition is extremely rare, affecting only around three in a million people, and can be deadly within hours, killing around a third of patients who have it.

Spontaneous oesophageal ruptures occur more frequently in men than women and typically affect those aged 40–60 years who overindulge in alcohol and food.

It typically occurs after forcefully vomiting due to the sheer pressure.

There was a small cut, called an oesophageal perforation. It can be life-threatening if food or fluid escapes and enters the body.

Untreated, the fluid can get trapped and lead to infection.

Perforation is usually caused by extreme vomiting, and if the oesophagus ruptures, known as Boerhaave’s syndrome, it can be deadly within hours.

The man underwent an upper endoscopy, a procedure in which doctors use a thin, flexible tube with a camera to look in the oesophagus.

Doctors saw the ‘pink foreign body’ covered in food debris that was later confirmed to be a plastic cupcake topper.

The small tear was carefully repaired during the endoscopy, doctors said.

The man was hospitalised for four days for persistent swallowing problems, called dysphagia, but was back to his normal diet by the day of discharge.

ER doctors commonly see patients who have swallowed foreign bodies. Most do not pose danger and resolve by themselves.

However up to one in five patients require removal by doctors, the report said.

No more than 1,500 deaths a year in the US are due to an object becoming lodged in the oesophagus. Figures in the UK are not clear.

Around 18 per cent of patients who suffer an oesophagus tear from a foreign body will die.

It’s most common for cases to be young children, but certain populations of adults are at risk, including those with psychiatric disorders, developmental delays and alcohol use disorder.

According to the doctors, the man had an alcohol problem as well as epilepsy.

There is also a link between national holidays and ER patients with injuries to their food pipe, but it’s normally due to over-indulgence, and not a foreign object.

X-rays are often the first imaging tests ordered in cases like this one, but it may not spot objects such as plastic and glass, which was the case for this patient.

It also isn’t able to spot perforation of the oesophagus, which would need treating quickly.