It’s amazing how quickly you grow accustomed to a healthy status-quo. I’ve been severely unwell for more than two years now. After being diagnosed with a brain tumour I entered a revolving door of surgeries, recovery, radiation, scans, fatigue, blood tests, medications, disability and devastation. In between those many interventions, my family and I occupied a space of uncertain alertness. We are constantly waiting for the next "thing".

Towards the end of last year, however, I found my way out of those discombobulating doors. Tentatively putting one foot in front of the other, I departed the world of the dangerously sick. There was a good scan. Then another. I returned to the gym and steadily began rebuilding lost strength and fitness, even shedding a smidgen of the weight I’d gained along the way. Work became busy. I started travelling interstate, then overseas. I stopped going to bed at 8.00pm. 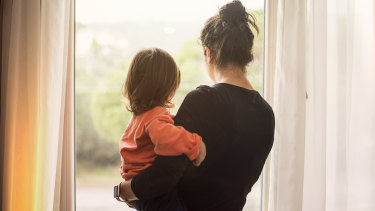 ‘I’m in a fragile space. Yet somehow, I rapidly regrasp the idea I’ll be okay again.’Credit:iStock

Life had regained a semblance of normality. until last Friday when I woke up and couldn’t see properly. Checking into hospital the following morning, I tried to steady my thoughts. Being sick requires enormous mental discipline. Otherwise your mind can spiral out of control and make a horrible situation more horrible. I like to focus on the next thing and not look much further into the future. I assume the best until I am told the worst. Or at least, that’s what I try to do.

My morning began with eye testing. I’ve sat in front of those machines dozens of times; a patch over one eye, darkness behind me and an expanse of nothingness ahead. Lights flash brightly, then dimly. Some are just within view and others well outside. I wonder how many flashes I am missing. I wonder how many more I am missing than last time I did this. I wonder if I am going blind. I wonder if I’ll be able to drive anymore. Shit, did I just miss another one?

Later that day, I lie on top of a made-up hospital bed in the neurosurgery ward, after giving what felt like a litre of blood to the pathologists. I am not getting under the sheet. I am not putting on a hospital gown. They are acts of acquiescence and I refuse to be sick again. I refuse.

I have two women for company, both mere days out of surgery. I remember that time, or rather I remember my husband’s stories about that time. Similarly, the women beside and across from me, currently unable to speak or stand or eat properly, won’t remember this. It will be a blur and that’s for the best.

Being sick requires enormous mental discipline. Otherwise your mind can spiral out of control.

I am booked for my MRI. It’s a machine lots of people fear because it feels like a coffin. I think it’s more like a tubular rocket ship; taking me to an unknown planet where my medical fate will be determined. I wonder which of the machines I will get today. It’s the one with the rainforest canopy on the ceiling; a feeble effort to help patients feel tranquil. I lie down on the cold, hard surface. Still as can be and about as far away from tranquil as I could possibly be.

The sounds are both intense and loud: jackhammers on the road, beeps from a semi-trailer reversing, screaming sirens. I begin my usual routine, which involves silently singing songs from The Sound of Music score from beginning to end. If I make a mistake, then I have to start over. The technician enters the room and injects blue dye into my veins. That means the scan will be over before I finish Climb Every Mountain.

My husband and son are in my hospital room when I return. My kid is tucked up in the bed watching Bluey on a laptop. I thank the God I don’t believe in for ABC Kids. The afternoon and evening wear on until we’ve been waiting for five hours, with no results. That’s standard at a busy public hospital on the weekend but doesn’t make it any less torturous. “Just tell us,” mutters my husband under his breath. Tell us if the tumour is growing again.

I’m clear. Clear, clear, clear. My tumour is marginally smaller, which means radiation treatment appears to be working. No cause for the changes in my vision have been established yet, but the really sinister stuff has been ruled out. Things will settle down soon, and they do. Forty-eight hours later I am sitting at my local café, typing these words and laughing with my favourite barista.

I live here now, in the uncertain impermanence of peace and good health. It’s a fragile space. Yet somehow, I rapidly regrasp the idea I’ll be okay again. Hope – just like the ordinariness of human routine – is eternal. I spent a few hours being grateful. I indulged in the warmth of my son’s cuddle, enjoyed the comfort of my own bed and held my husband’s hand more than usual. And then I adjusted. Triumph and disaster took over once more these past few days but for now at least, I am back.

Jamila Rizvi is writing a book about the intersection between physical and mental health, with Rosie Waterland. Broken Brains will be published in early 2021.