Women living in England’s poorest areas are leading progressively shorter lives because of ill health and have lost 98 days from their life expectancy, figures show.

Girls born in deprived areas in 2017 are expected to die more than three months earlier than those born in the same areas in 2012.

Meanwhile, the lives of boys born in the wealthiest areas got three months (95 days) longer during the same period.

The gap between the wealthiest and poorest women has widened to 7.4 years – with the former expected to live 86.2 years and the latter 78.7. 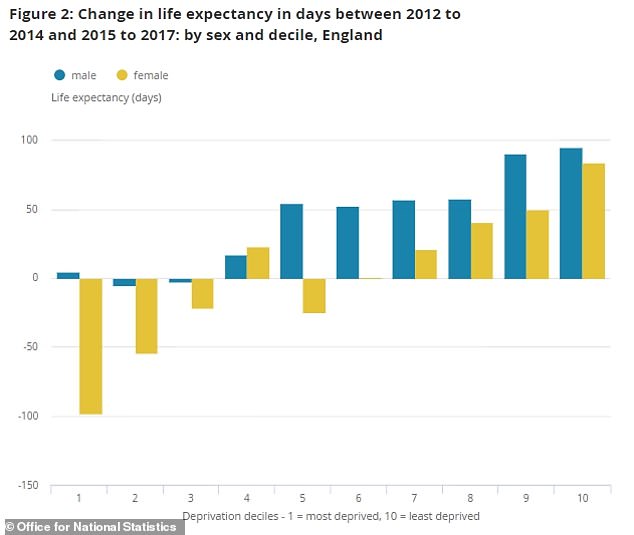 Women in the most deprived areas of England had the biggest drop in their life expectancy between 2012 and 2017, losing 98 days in total. Women’s lives were shortened in four separate categories of wealth whereas men’s only dropped in two

Figures published by the Office for National Statistics today showed the poorest women in the country have the fastest falling life expectancies.

On a scale of one to 10 measuring deprivation, women in the lowest category (one) lost nearly 100 days off their life expectancy at birth between 2012 and 2017.

Men’s life expectancies only shortened in two of the deprivation categories – the second and third – and only by five days and two days.

Everybody above the average level of wealth saw their lifespans increase during the five-year period.

In the very richest areas (10 on the scale) men gained the most, with their lives expected to be 95 days longer and women’s 84 days longer.

‘We’ve found a large fall in life expectancy at birth among women living in the most deprived areas in England when comparing the periods 2012 to 2014 and 2015 to 2017,’ said the ONS’s Ben Humberstone.

‘This is in contrast to the continued increases in life expectancy for women living in the least deprived areas.

‘This has led to a significant widening in the inequality in life expectancy at birth in England.’ 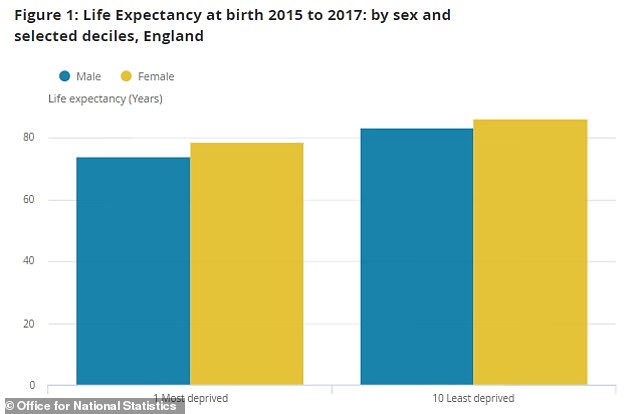 The gap between the most and least deprived has widened by about six months for women and four months for men – the average life expectancy for the poorest people is 76.4 years and for the wealthiest it’s 84.8 years

Today’s statistics follow a release earlier in March which revealed the average life expectancy for all men and women in Britain has falled by six months in a year.

Statistics from the Institute of Faculty of Actuaries, which calculates life expectancy for pension providers, expects men to live until 86.9 years and women to 89.2 years.

More affluent people have always had longer lives, on average, than those who are less well off.

Professor Majid Ezzati, from Imperial College London, shed some light on possible reasons in a paper in The Lancet last year.

He said: ‘Working income has stagnated and benefits have been cut, forcing many working families to use food banks.

‘The price of healthy foods like fresh fruit and vegetables has increased relative to unhealthy, processed food, putting them out of the reach of the poorest.

‘The funding squeeze for health and cuts to local government services since 2010 have also had a significant impact on the most deprived communities, leading to treatable diseases such as cancer being diagnosed too late, or people dying sooner from conditions like dementia.’

Similar research in 2018 prompted experts to point the finger at a slowdown in health improvements and rising rates of obesity.

As more people become dangerously overweight – 64 per cent of English adults are now overweight or obese – their risk of heart disease and cancer rises. 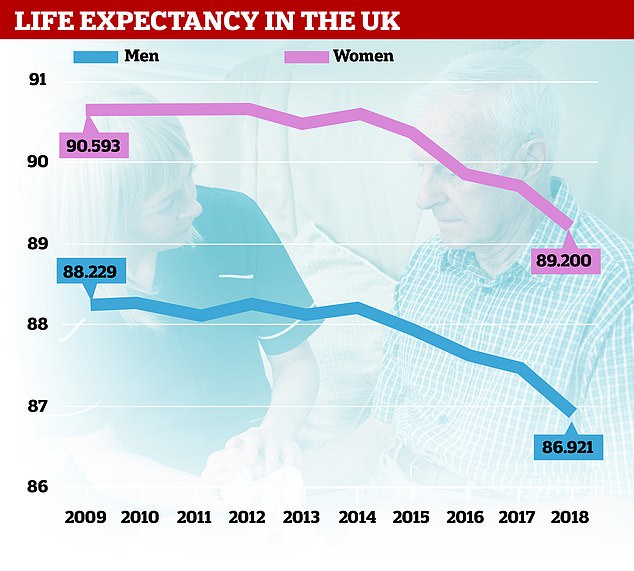 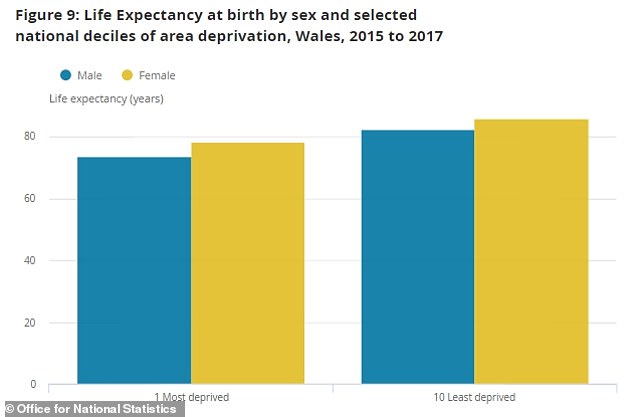 Professor Naveed Sattar from the University of Glasgow, told MailOnline in December big life expectancy improvements were made in the 1980s, ’90s and 2000s because of reductions in smoking, blood pressure and high cholesterol.

But he said there has been a plateau of preventative health developments in recent years, and tackling diabetes and obesity could be the next big things.

‘These made big, big changes each time,’ said Professor Sattar. ‘Since then we haven’t had a significant [improvement] for anything else.’

He added: ‘We now have far better therapies for diabetes and improving treatments for heart failure,’ but said there isn’t one easy target.

‘Obesity carries some risk like high blood pressure, cholesterol and but it also affects people in ways we don’t yet understand and can’t mitigate,’ Professor Sattar said.

For the UK to improve its life expectancy to be like Japan, where the average person lives for 84 years, losing weight could be key, he suggested.

‘People’s BMIs in Japan tend to be significantly lower than in the UK. They tend to be much leaner for longer.

‘Obesity could make part of the explanation for the future – the UK is one of the most obese nations in Europe.’

WHERE DO PEOPLE LIVE THE LONGEST LIVES IN ENGLAND AND WALES?

According to Office for National Statistics data in 2018, these are where babies are born with the longest life expectancy.

WHERE DO PEOPLE LIVE THE SHORTEST LIVES IN ENGLAND AND WALES?

According to Office for National Statistics data in 2018, these are where babies are born with the shortest life expectancy.