Lauren Maxwell used to love a good steak and says she would eat meat for dinner about six nights a week.

But about 15 years ago, the retired hairdresser started experiencing heartburn and was told by a herbalist to cut out red meat. 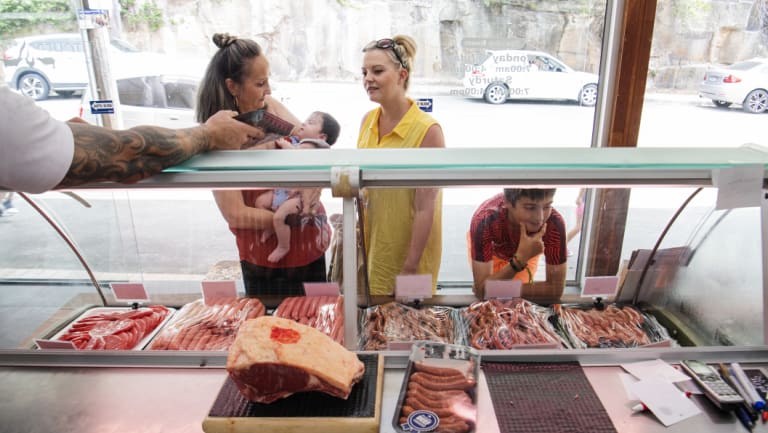 Lauren Maxwell misses eating red meat as she helps her daughter Hayley shop for the long weekend at the butcher in Arncliffe.Credit:Louise Kennerley

Now, she would be lucky to eat red meat twice a year.

"When I do a baked dinner for the family, nothing smells as good as baked leg lamb. I'll sneak a little bit and within 10 minutes I feel sick," she says.

This long weekend, she'll be eating "lots of seafood and chicken" at a family barbecue in Wollongong.

Latest figures from the Department of Agriculture and Water Resources show that Australians are eating the same amount of meat per person per year as we were in 1974, but what's changed is the type. Where beef and veal used to be the most popular, chicken is now the leading choice of meat in Australia.

"Australia has a long history of enjoying meat as a food," says the spokeswoman for Nutrition Australia Aloysa Hourigan.

But she says the conversation around meat has become an "all or nothing" approach and there are dangers in both options as the rise of plant-based diets can pose "nutritional risks" if adequate preparation is not undertaken.

"People don't always get a good balance on a vegan or vegetarian diet. You can get zinc from seafood and fish but most other foods are not high in iron," says Hourigan, who has also practised as an accredited nutritionist for more than 20 years.

"That's a hell of a lot of meat," says Professor Alison Hodge, honorary member of the University of Melbourne's School of Population and Global Health.

Professor Hodge conducted a study in the 1990s that found consumption of processed meat caused high-risk levels of colorectal cancer.

"That's the message people are still getting," she says.

But the move away from red meat towards chicken is also related to a change in price.

"When I was a kid, [eating] chicken was a special occasion. We’d only get that on our birthday. Now chicken is cheap," says Professor Hodge.

Nutritionist Hourigan says the ideal diet is Mediterranean, with a focus on lean meat in small amounts with plenty of fish, poultry and legumes. She recommends a "flexitarian" approach, eating mostly vegetarian meals but with an occasional serving of fish or meat.

"That way you will get a better balance of the nutrients and not all of the negative aspects of meat," she says.

But this weekend, as Coles prepares for a 50 per cent increase in lamb and sausage sales, Hourigan says that tucking into a couple of barbecued sausages is not problematic.

"It needs to be an occasional food, not everyday food.