The postcode lottery for seeing your GP: Just HALF of appointments are done face-to-face in parts of England – and a THIRD are with actual doctors… so use our maps to see how YOUR area fares

England’s GP access postcode lottery was laid bare today by official data showing just half of appointments are face-to-face in parts of the country.

NHS Digital figures show 65 per cent of consultations were made in-person across England in July, compared to more than 80 per cent before Covid.

But the rate was as low as 50 per cent in Somerset were made face-to-face during the month, according to the same statistics. The best-performing areas were Bedfordshire, Luton and Milton Keynes, where three-quarters of all consultations were done in-person.

Campaigners slammed the lack of action to bring areas that are lagging behind back up in line with other regions, despite the Government’s ‘promises of intervention’.

Dennis Reed, director of elderly charity Silver Voices, told MailOnline there has been ‘no improvement at all since the end of the pandemic’ in parts of England.

Meanwhile, the figures also showed fewer than half of appointments across the country were with a fully-qualified GP.

Over a third of July’s consultations in Lincolnshire were with a doctor, geographically broken-down stats revealed. The rest were seen by other staff, which can include nurses, physiotherapists and even acupuncturists. 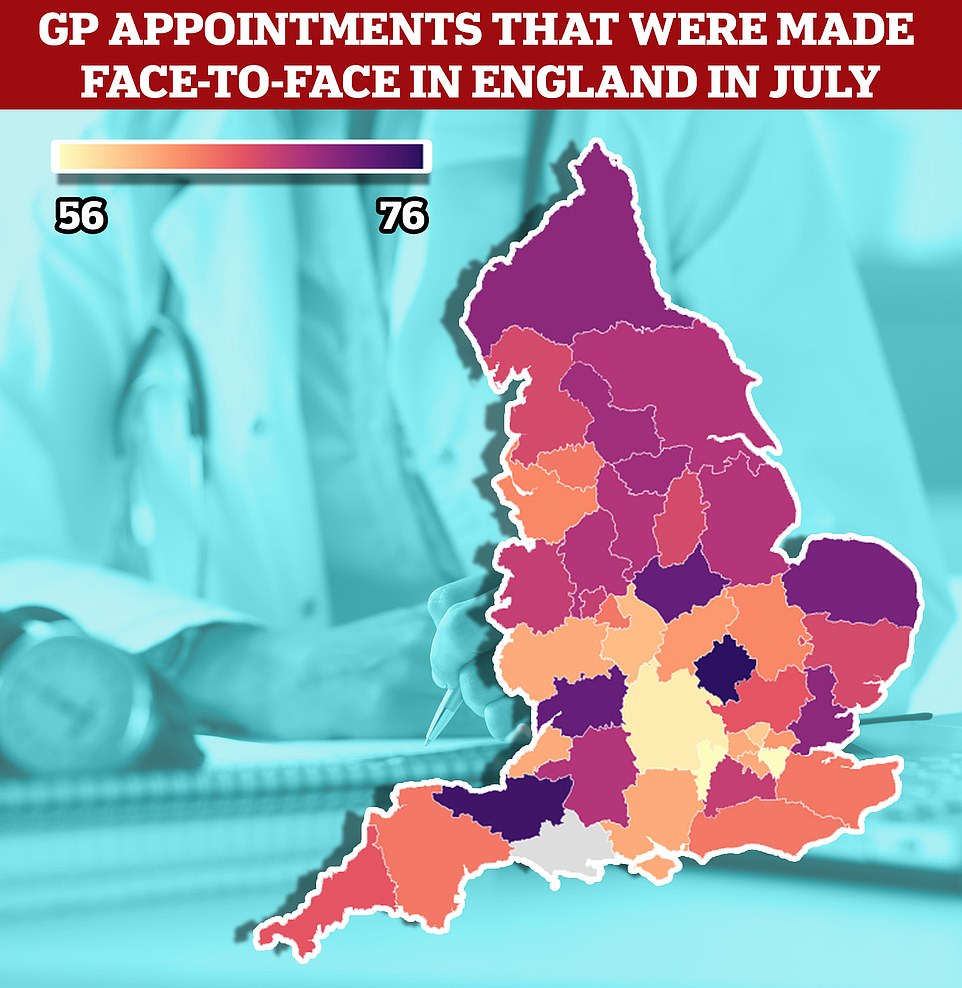 England’s GP access postcode lottery was laid bare today as official data showed just half of appointments were made face-to-face in parts of the country. Map shows: The proportion of GP appointments made in-person in July across England’s integrated care boards 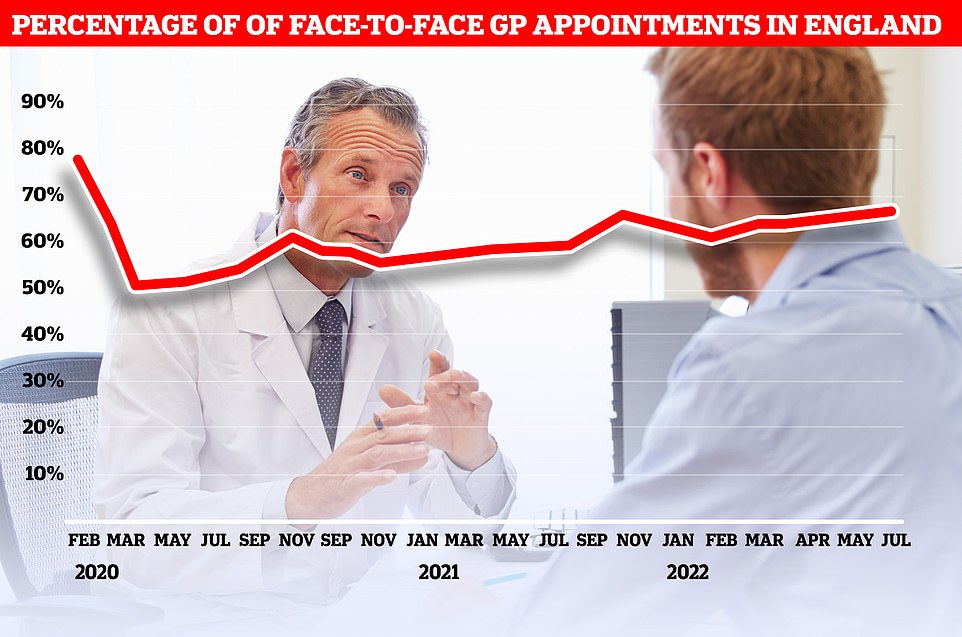 NHS Digital figures show 65 per cent of consultations were made in-person across England in July, compared to more than 80 per cent before Covid

Two-thirds of English adults haven’t seen an NHS dentist since the early days of Covid, in a sign the service is on its ‘last legs’.

A total of 16million people have had a check-up on the health service since June 2020, official statistics revealed today.

This is almost 2million fewer appointments than in the previous window, between 2019 and 2021.

But the drop is even starker when compared to pre-pandemic levels, with 21million adults seeing an NHS dentist during the two-year period ending June 2020.

Meanwhile, fewer than half of English children (46.2 per cent) have had a check-up in the past year, despite being under-18s being entitled to free dental care. Adults have to pay a minimum of £23.80 for a basic check-up.

It comes amid increasing reports of desperate Britons resorting to ‘DIY dentistry’ as they struggle to access NHS dental services, pulling out rotten teeth with pliers or sticking in artificial dentures with superglue.

Eddie Crouch, chair of the British Dental Association (BDA), said: ‘What we’re seeing isn’t a recovery, but a service on its last legs.

‘The Government will be fooling itself and millions of patients if it attempts to put a gloss on these figures.

‘NHS dentistry is lightyears away from where it needs to be. Unless ministers step up and deliver much needed reform and decent funding, this will remain the new normal.’

The health service data shows NHS Somerset Integrated Care Board had the lowest proportion of face-to-face appointments in the country last month.

Some 32 per cent of appointments in the region were over the phone, while 16 per cent were listed as ‘unknown’ — meaning they could have been in-person, at home, on the phone or online.

NHS Frimley Integrated Care Board had the next lowest face-to-face proportion, with just 56 per cent made in-person.

The figures also showed the proportion of appointments that are with a full-qualified GP have continued to fall for the second month in a row.

Just 49.1 per cent of consultations were with a doctor last month, while 47.8 per cent were with other practice staff. For comparison the figures were 49.9 per cent and 46.9 per cent respectively in June.

Overall, 26 out of England’s 43 integrated care boards saw more than half of patients having GP appointments with other staff.

Mr Reed told MailOnline: ‘Despite Government promises of intervention to increase the number of face to face appointments, these statistics show no improvement at all [in parts of the country] since the end of the pandemic.

‘The postcode lottery on such appointments is largely caused by the random distribution of GPs across the country.

‘There is no system in place to monitor where more GPs are needed and no national incentives to get newly trained doctors where the GP deserts exist.’

‘But what they don’t show is if patients got an appointment with their GP when they needed it and in the format that met their needs.

‘We know how much pressure GPs and their teams are under but rather than primary care falling into ways of working that have been adopted because of the pandemic, we’d like primary care to ask patients what their priorities are for primary care services.

‘The NHS should make patients part of any solution. Asking patients’ opinions will help the NHS plan and prioritise better.’ 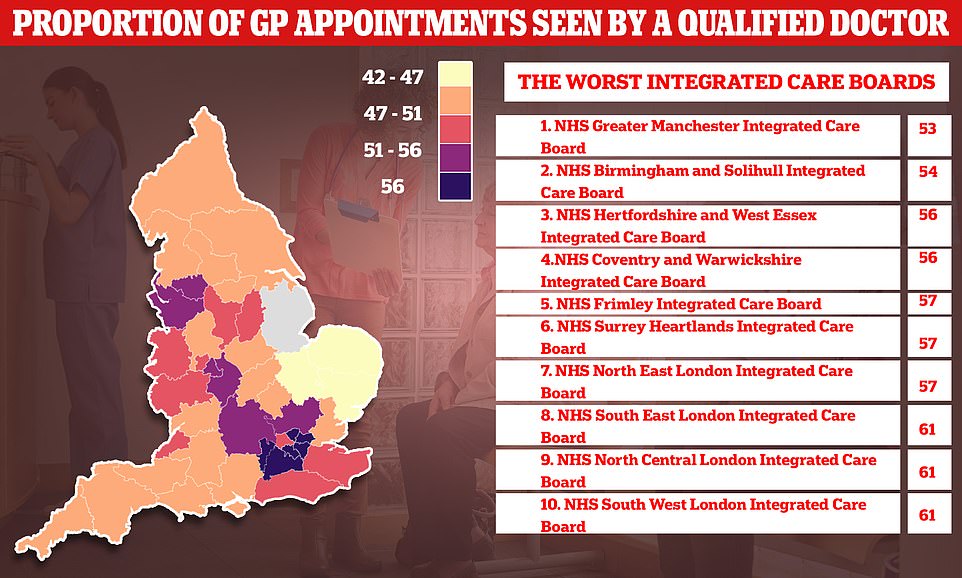 Just over a third of consultations in Lincolnshire were with a doctor. The rest were seen by other staff, including nurses, physiotherapists and even acupuncturists. Map shows: The proportion of appointments seen by a fully-qualified GP in ICBs across England in July

NHS leaders are drawing up a trans guide for hospitals that will include how to fight ‘anti-trans’ groups and use ‘inclusive language’.

NHS Confederation — a charity representing health service bodies in England, Wales and Northern Ireland — is advertising a £20,000 contract to create a practical guide to being a ‘trans and non-binary ally’.

The charity, which is an influential lobby group for the NHS which hospitals pay to be a member of, is run by Matthew Taylor, a former political adviser to Sir Tony Blair.

It is unclear if the tender will be funded directly by NHS membership contributions, essentially at the cost of the taxpayer, or from other sources.

It will also include recommendations on the use of ‘inclusive terminology’ in the health service.

This, the tender claims, will help senior healthcare leaders have the ‘knowledge and the confidence’ to be ‘meaningful’ allies, the charity says.

It adds this guide should also include ‘ideas for supporting NHS organisations when they face opposition from anti-trans groups and individuals.’

This has sparked alarm among critics of NHS gender-neutral language policies, who fear it will be used to silence people who push back against ‘wokism’ in the NHS.

She added: ‘We know many patients prefer face-to-face appointments while some patients have been happy with phone appointments and continue to be satisfied with them.

‘We believe patients have the right to consult their GP in a way that best meets their needs.’

Mr Reed said: ‘Face to face appointments are safer than remote consultations and many older people are not equipped to use Zoom, or comfortable in such exchanges.

‘People who are hard of hearing cannot access telephone consultations. Silver Voices is calling for a legal right for all patients to have a timely face to face appointment with their doctor if they choose.’

MPs and pressure groups have called for GPs to to make offering more face-to-face appointments an ‘essential mission’ since all Covid restrictions were axed earlier this year.

It led to tension with medics and unions at the time, who claimed doctors were already over-worked and had been taking unprecedented numbers of appointments over the pandemic.

Mr Javid later insisted levels were ‘returning rapidly’ before he stood down. Critics, however, claimed improvements were only happening at a ‘snail’s pace’.

Ruth Rankine, director of primary care at the NHS Confederation, said: ‘In the face of the huge and sustained pressure across the NHS which is already feeling like winter, staff working across primary care continue to make significant strides in recovering and restoring access to general practice whilst meeting increasing demand for services.

‘At 26million, the total number of appointments was 5.5 per cent higher in July than it was in the same month in 2019 during pre-pandemic levels, with almost two thirds of all appointments delivered face-to-face.

‘This is in the context of fewer practices and GPs but more patients registered month on month.

‘It is therefore vital that the Government starts to defend our primary care services and support them to continue to do their best in the face of the challenges ahead.

‘This includes fully resourcing its workforce and providing the capital investment it desperately needs.’

The appointment crisis has been partly caused by hundreds of surgeries shutting over the past decade, forcing millions to switch to a different doctor.

Some have had to close their doors completely because of staffing issues, leaving patients with no option but to travel. Others have merged, creating ‘soulless’ mega-practices.

Overall, there are now nearly 1,700 fewer full-time equivalent GPs than in 2015 — despite a Government pledge to hire thousands more.

Many are retiring in their 50s, moving abroad or leaving to work in the private sector because of complaints about soaring demand, paperwork and aggressive media coverage.

At the same time as GPs leaving and practice shutting, the population has also grown, exacerbating the patient list size ratio.

A survey earlier this year revealed that patient satisfaction with their GP surgery has plummeted to its lowest ever level, fuelled by the appointments crisis.

It has seen patients rushed through consultations like ‘goods on a factory conveyor belt’, a damning report warned in May.

A quarter of consultations are taking five minutes or less in some parts of the country. Doctors say squeezing in so many appointments raises the risk of missing diseases and prescribing the wrong drugs.

In order to make it easier for millions of patients to be seen, family doctors have been told they must start offering weekday evening and weekend consultations from October.

But family doctors have threatened industrial action over the same NHS contract because they feel overwhelmed and fear the move will spread them even thinner.

A&E units say the crisis has also been felt in casualty units, with patients left feeling they have no other option but to go there for treatment.