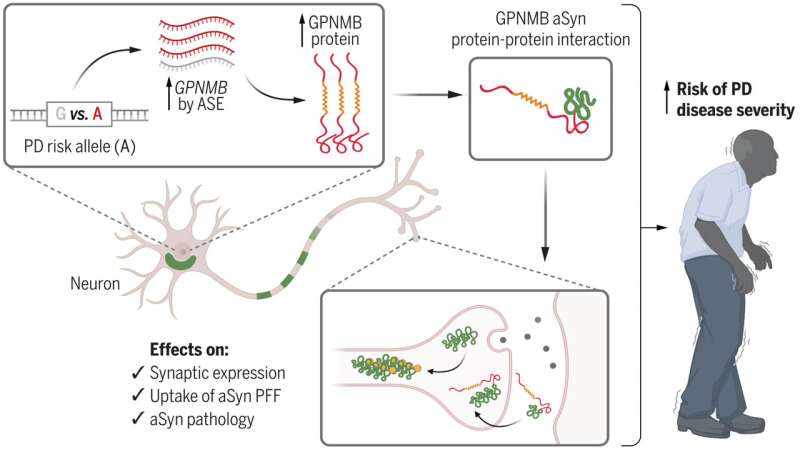 A large team of researchers working at the University of Pennsylvania, has found evidence that suggests increased concentrations of the transmembrane protein Glycoprotein Nonmetastatic Melanoma Protein B (GPNMB) in blood samples could be an early biomarker for Parkinson’s disease. In their paper published in the journal Science, the group describes how they studied possible risk factors associated with chromosome 7 in Parkinson’s disease patients and what they found regarding a link to the GPNMB. Brit Mollenhauer and Christine A. F. von Arnim have published a Perspectives piece in the same journal issue outlining the work done by the team in Philadelphia.

Parkinson’s disease is a neurogenerative disease that leads to shaking and stiffness of limbs and appendages along with problems with balance—as the disease progresses, most patients develop problems with walking. Its cause is still under investigation though most in the field believe it is an instance of a genetic disorder making people more susceptible to some still unknown environmental element. And while there are a number of therapies used to treat symptoms (such as dopamine), there is no cure.

Prior research has shown that damage to nerves begins long before patients experience symptoms. For that reason, scientists have been looking for early markers that could be used to allow for earlier diagnosis and treatment. In this new effort, the researchers began their work by noting that, despite the identification of multiple genes that are thought to contribute to a risk for developing the disease, the actual genes involved are still not known. For that reason, they chose to focus their work on the development of a-synuclein (aSyn)—fibrils that form in Parkinson’s patients that are a hallmark of the disease.