Home » Health News » In some US zip codes, young men face more risk of firearm death than those deployed in recent wars 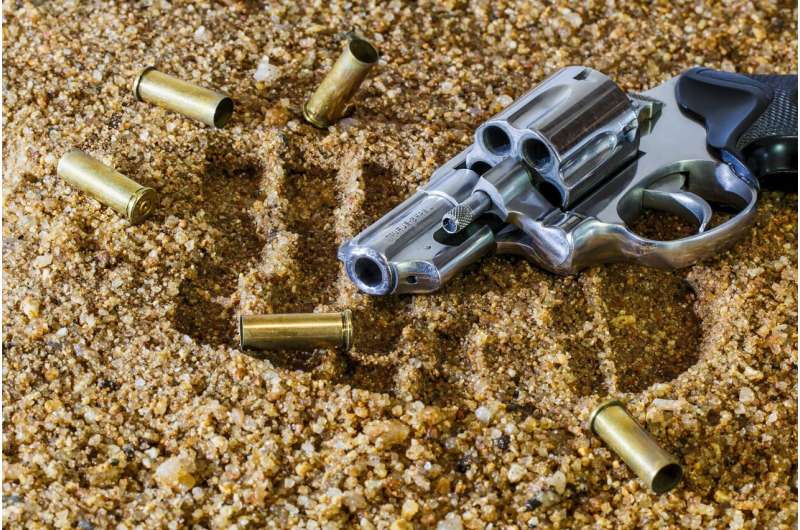 The risk of firearm death in the U.S. is on the rise: in 2020, firearms became the leading cause of death for children, adolescents and young adults. Yet the risk is far from even—young men in some U.S. zip codes face disproportionately higher risks of firearm-related injuries and deaths.

To better understand the magnitude of the gun violence crisis and put it in perspective, researchers at Brown University and the University of Pennsylvania compared the risk of firearm-related death for young adult men living in the most violent areas in four major U.S. cities with the risks of combat death and injury faced by U.S. military personnel who served in Afghanistan and Iraq during active periods of war.

The results were mixed: The study, published in JAMA Network Open, found that young men from zip codes with the most firearm violence in Chicago and Philadelphia faced a notably higher risk of firearm-related death than U.S. military personnel deployed to wartime service in Afghanistan and Iraq. But the opposite was true in two other cities: The most violent areas in New York and Los Angeles were associated with much less risk for young men than those in the two wars.

In all zip codes studied, risks were overwhelmingly borne by young men from minority racial and ethnic groups, the study found.

“These results are an urgent wake-up call for understanding, appreciating and responding to the risks and attendant traumas faced by this demographic of young men,” said Brandon del Pozo, an assistant professor of medicine (research) at Brown’s Warren Alpert Medical School and an assistant professor of health services, policy and practice (research) at the University’s School of Public Health.

Del Pozo conducts research at the intersection of public health, public safety and justice, focusing on substance use, the overdose crisis, and violence. His recently released book, “The Police and the State: Security, Social Cooperation, and the Public Good,” is based on his academic research as well as his 23 years of experience as a police officer in New York City and as chief of police of Burlington, Vermont.

“Working as a police officer, I witnessed the toll of gun violence, and how disruptive it was for families and communities,” del Pozo said. “It stood out to me that the burden was not distributed evenly by geography or demographic. Some communities felt the brunt of gun violence much more acutely than others. By analyzing publicly available data on firearm fatalities in cities and in war, we sought to place that burden in sharp relief.”

At the same time, del Pozo said, he and the other study authors were responding to oft-repeated inflammatory claims about gun violence in American cities.

“We often hear opposing claims about gun violence that fall along partisan lines: One is that big cities are war zones that require a severe crackdown on crime, and the other is that our fears about homicides are greatly exaggerated and don’t require drastic action,” del Pozo said. “We wanted to use data to explore these claims—and it turns out both are wrong. While most city residents are relatively safe from gun violence, the risks are more severe than war for some demographics.”

Illustrating the magnitude of the firearm crisis

To conduct their analysis, the researchers obtained information on all fatal and nonfatal shootings of 18- to 29-year-old men recorded as crimes in 2020 and 2021 in Chicago; Los Angeles; New York; and Philadelphia—the four largest U.S. cities for which public data on those who were shot were available. For New York, Chicago and Philadelphia, they used shooting death and injury data sets made public by each city; for Los Angeles, they extracted firearm death and injury data from a larger public data set of recorded crimes. Data were aggregated to the zip code level and linked to corresponding demographic characteristics from the U.S. Census Bureau’s 2019 American Community Survey.

The researchers acquired wartime combat-related mortality and injury counts for the conflicts in Iraq and Afghanistan from peer-reviewed analyses of U.S. military data covering the years 2001 to 2014 for the war in Afghanistan and 2003 to 2009 for the war in Iraq, both of which were periods of active combat. Because there is limited data about the risks of serving in different military units at different times during the Afghanistan and Iraq wars, the researchers considered the mortality and injury data of a single, de-identified Army brigade combat team engaged in combat during a 15-month period of the Iraq War that involved notably above-average combat death and injury rates at a time considered to be the height of the conflict.

The analysis included 129,826 young men residing in the four cities considered in the study.

The researchers found that compared to the risk of combat death faced by U.S. soldiers who were deployed to Afghanistan, the more dangerous of the two wars, young men living in the most violent zip code of Chicago (2,585 individuals) had a 3.23 times higher average risk of firearm-related homicide, and those in Philadelphia (2,448 people) faced a 1.9 times higher average risk of firearm-related homicide. Singling out the elevated dangers faced by the U.S. Army combat brigade in Iraq, the young men studied in Chicago still faced notably greater risks, and the ones faced in Philadelphia were comparable.

However, these findings were not observed in the most violent zip codes of Los Angeles and New York, where young men faced a 70% to 91% lower risk than soldiers in the Afghanistan war across fatal and nonfatal categories.

When the researchers looked at the demographics of the young men in the zip codes studied, they determined that the risk of violent death and injury observed in the zip codes studied was almost entirely borne by individuals from minority racial and ethnic groups: Black and Hispanic males represented 96.2% of those who were fatally shot and 97.3% of those who experienced nonfatal injury across all four cities.

In the study, the researchers make the point that the risk of firearm death is not the only thing that young men living in violent U.S. zip codes have in common with young men at war.

“Exposure to combat has been associated with stress-inducing hypervigilance and elevated rates of homelessness, alcohol use, mental illness and substance use, which, in turn, are associated with a steep discounting of future rewards,” they write.

“Our findings—which show that young men in some of the communities we studied were subject to annual firearm homicide and violent injury rates in excess of 3.0% and as high as 5.8%—lend support to the hypothesis that beyond the deaths and injuries of firearm violence, ongoing exposure to these violent events and their risks are a significant contributor to other health problems and risk behaviors in many U.S. communities.”

Del Pozo added that the health risks are likely even higher for people in cities, because they need to face their “battles” every day over a lifetime, as opposed to military personnel in a tour of duty in Afghanistan, which typically lasted 12 months. The study results, del Pozo said, help illustrate the magnitude of the firearms crisis, a necessary understanding to municipalities seeking to formulate an effective public health response.

“The findings suggest that urban health strategies should prioritize violence reduction and take a trauma-informed approach to addressing the health needs of these communities,” del Pozo said.