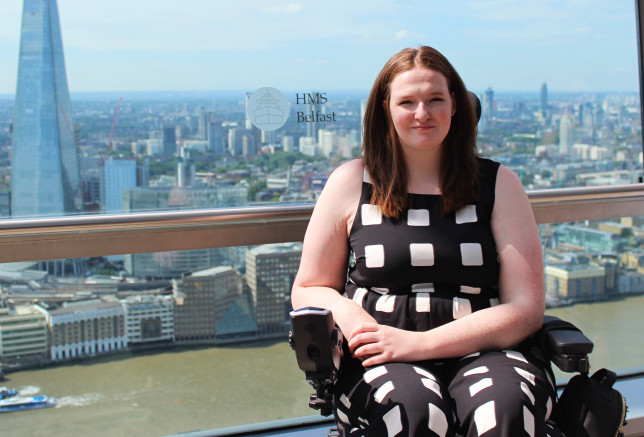 After a rough 2020, many of us could relate to feeling strange on New Year’s Eve, looking towards a 2021 full of uncertainty.

However, it was particularly unusual for me as it also marked the day I found out that I needed major open heart surgery – at age 23, in the middle of a pandemic.

Growing up with Marfan Syndrome, a rare genetic connective tissue disorder affecting the whole body, meant that the idea of heart surgery in the future wasn’t totally alien to me.

I spent my childhood and teenage years visiting Great Ormond Street Hospital to have my heart monitored, but I’d always remained stable.

As a teenager, I had spinal and hip surgeries three years in a row, but my heart remained unchanged. I was under the assumption that heart surgery was a couple of decades away. Not for one second did I expect to get the phone call in my early twenties.

When I was told, I was overwhelmed. I felt apprehensive about having yet another surgery, concerned about how Covid-19 might affect things and worried about the disruption medical intervention would once again cause to my life.

Although I might be a little more prepared for this news than those who require a life changing operation out of the blue, it’s still incredibly daunting. It feels like unknown territory. There’s something about heart surgery that just sounds scarier than my previous operations.

There is of course an added element to this apprehension: Covid-19. With the current restrictions on hospital care, as well as the initial surprise, this whole journey is going to look incredibly different to how I imagined it might eventually be.

The surgery I need is to repair an aortic aneurysm, an operation that before the pandemic, doctors and medical staff wouldn’t like to delay.

Back then, friends with the same condition as me had their surgeries within a couple of months, but now I face having to wait up to half a year.

This potential delay is a massive source of anxiety for me. It’s not the kind of situation you can just put to the back of your mind; these next six months will be full of stress as I wait.

Elective surgeries are once again cancelled across the country and when things do start again, there will be a backlog to get through that stretches back to the first lockdown. In April 2020, 1.13 million people were waiting longer than the 18-week target for treatment: the highest recorded number since January 2008.

While these elective surgeries may not be an immediate emergency, delays can lead to worsening symptoms, anxiety and a general deterioration in health.

I’ve also been waiting for a hip biopsy over the past year – the worsening pain I’ve experienced as a result of delays has been bad enough but the idea of having to wait up to six months for vital heart surgery is causing me anxiety that is far worse.

If left untreated, aortic aneurysms can rupture, causing major internal bleeding. This is known as an aortic dissection. It’s a life-threatening event and I’ve grown up all too aware of the risks after both my uncle and grandad passed away from this complication.

On top of this, I could be going through the surgery alone. Currently, most visitors aren’t allowed in hospitals, and this isn’t set to change until the case rates dramatically improve and we begin to get back some normality.

I might be an adult, but having my mum by my side during my previous surgeries made the world of difference. It’s unsettling to think that I might have to go through my biggest life event so far with my loved ones supporting me via Facetime only.

I wish there was more support available. My cardiology team is amazing and I know I can reach out with questions, but right now, having no idea when I’ll be having this much-needed operation is scarier than the idea of heart surgery itself.

I’ve always been the kind of person who is reassured by knowing as much information as possible, but at the moment, no one knows what’s happening day to day, let alone in several months’ time.

I hope that when I do get a confirmed surgery date, it will go ahead as planned. I’ve had surgery cancelled before and it’s one of the most gut-wrenching feelings to have prepared yourself for something so major, to be told it’s suddenly not happening.

I can only imagine how much worse that feels when you have already experienced heavy delays.

It does feel like non-Covid care has been forgotten throughout this past year, with the impact on people’s physical and mental wellbeing not being fully appreciated or considered.

Having a rare condition means I’m used to having regular appointments with a wide range of health professionals, and it is a great concern of mine that that this disruption to my regular healthcare could continue on for quite some time yet.