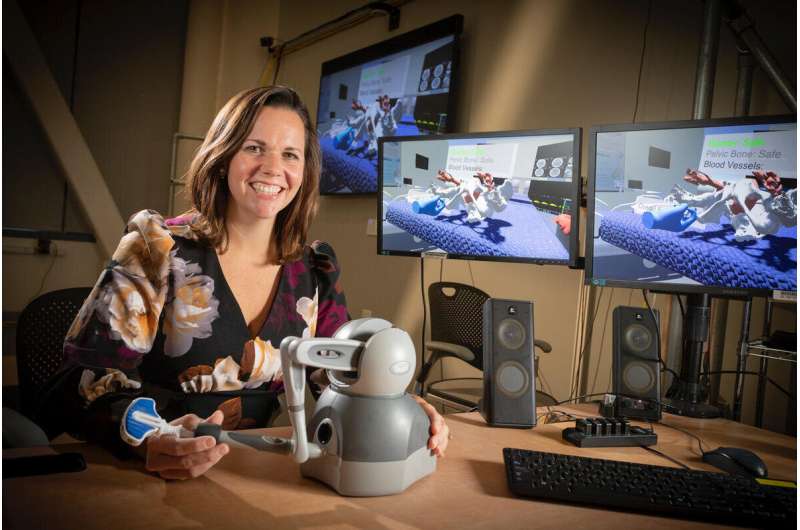 For the 1 in 3 women who experience urinary incontinence, treatment often comes in the form of surgery: implanting a device called a midurethral sling. The sling stops uncontrolled urination during physical activity, such as lifting or laughing.

But regardless of how expert the surgeon performing the sling procedure may be, there’s a common issue across the 300,000 such minimally invasive surgeries performed in the U.S. each year: The surgeon works “blindly”—or, by feel. They estimate angles based on external anatomic landmarks and take note of subtle, tactile changes in tissue response as the sling is placed under the urethra with a tool called a trocar.

To replace the current expensive and time-intensive training process for the sling procedure, Central Virginia VA Health Care System urogynecologist Lauren Siff, M.D., is leading a team of interdisciplinary researchers from across Virginia Commonwealth University who are building a virtual-reality training application.

“Dr. Siff’s technology is a good example of how virtual reality can have an impact on the real world,” says Brent Fagg, a senior licensing manager at VCU Innovation Gateway, the university’s technology-transfer and IP support office. “She has found a use for VR that can lower costs, remove risks and open this life-changing surgery up to more people in need of it.”

The blind nature of sling surgery can result in up to a 13% complication rate, explained Siff, one of 1,300 urogynecologists in the U.S. who perform the procedure. And while rare, there have even been reports of death related to vascular or bowel injury caused by the procedure. “Unfortunately, there’s no universal proficiency standards for surgeon credentialing” for midurethral slings, said Siff, an adjunct assistant professor in the Department of Obstetrics and Gynecology of the VCU School of Medicine.

“We know that surgery is effective, but our current training methods are either an apprenticeship, where you’re learning on live patients working with an expert surgeon, cadaver labs or a static, plastic model,” Siff said.

Training also often requires funding and travel time away from work. And when working with cadavers, tissue can become distorted after multiple passes of the sling. “So we asked ourselves, ‘How can we teach a blind technique that really requires learning by feel and high volume to develop muscle memory in the era of limited hours, resources and case numbers?'” Siff said.

Here’s how the training system works: Think of it as a kind of video game. A VR headset, worn by the training surgeon, displays a 3D model of a female pelvis. The user holds a stylus, custom-designed with a trocar handle. The surgeon-in-training wears the headset; as they move the stylus, it moves in the same manner within the VR environment that the trocar would be inserted and shifted within the pelvis.

Visual cues assist the surgeon, and haptics—the same technology found in phones —cause the stylus to vibrate or push back and give the user the physical sensation of touching bone or bladder. Such virtual components make the process more real.

In the trainer, Siff has helped the system’s developers code “an example of the ideal pathway” to implant the sling within the pelvic floor. “The VR model helps the user properly introduce the trocar, feel the pubic bone, and use that sensation with haptics and visuals to drop behind the bone and pass the sling,” she said.

Users are scored based on how well they perform the virtual procedure.

“In an ideal world, the trainee, with practice, will follow the exact steps and proper pathway get a high score, demonstrating their competency, and then they can provide that score to the attending surgeon to prove that they’re ready for primetime,” Siff said. “This will hopefully become a training system that allows fellows and training surgeons to say, ‘Put me in coach, I’m ready to play.'”

Siff also said she hopes the VR system will be accepted by health systems and credentialing organizations to prove surgeons are competent to perform the sling procedure. Noted Fagg, with VCU innovation Gateway: “Now, the opportunity is to refine the product and ensure it becomes an accredited training method for urogynecologists nationwide.”