PHILADELPHIA — When doctors at a primary care clinic here noticed many of its poorest patients were failing to show up for appointments, they hoped giving out free rides would help.

But the one-time complimentary ride didn’t reduce these patients’ 36% no-show rate at the University of Pennsylvania Health System clinics.

“I was super surprised it did not have any effect,” said Dr Krisda Chaiyachati, the Penn researcher who led the 2018 study of 786 Medicaid patients.

Many of the patients did not take advantage of the ride because they were either saving it for a more important medical appointment or preferred their regular travel method, such as catching a ride from a friend, a subsequent study found.

It was not the first time that efforts by a healthcare provider to address patients’ social needs — such as food, housing, and transportation — failed to work.

In the past decade, dozens of studies funded by state and federal governments, private hospitals, insurers, and philanthropic organizations have looked into whether addressing patients’ social needs improves health and lowers medical costs.

But so far it’s unclear which of these strategies, focused on so-called social determinants of health, are most effective or feasible, according to several recent academic reports by experts at Columbia, Duke, and the University of California-San Francisco that evaluated existing research.

And even when such interventions show promising results, they usually serve only a small number of patients. Another challenge is that several studies did not go on long enough to detect an impact, or they did not evaluate health outcomes or health costs.

“We are probably at a peak of inflated expectations, and it is incumbent on us to find the innovations that really work,” said Dr Laura Gottlieb, director of the UCSF Social Interventions Research and Evaluation Network. “Yes, there’s a lot of hype, and not all of these interventions will have staying power.”

With healthcare providers and insurers eager to find ways to lower costs, the limited success of social-need interventions has done little to slow the surge of pilot programs — fueled by billions of private and government dollars.

Paying for Health, Not Just Healthcare

Across the country, both public and private health insurance programs are launching large initiatives aimed at improving health by helping patients with unmet social needs. One of the biggest efforts kicks off next year in North Carolina, which is spending $650 million over five years to test the effect of giving Medicaid enrollees assistance with housing, food, and transportation.

These moves mark a major turning point for Medicaid, which, since its inception in 1965, largely has prohibited government spending on most nonmedical services. To get around this, states have in recent years sought waivers from the federal government and pushed private Medicaid health plans to address enrollees’ social needs.

The move to address social needs is gaining steam nationally because, after nearly a dozen years focused on expanding insurance under the Affordable Care Act, many experts and policymakers agree that simply increasing access to healthcare is not nearly enough to improve patients’ health.

That’s because people don’t just need access to doctors, hospitals and drugs to be healthy, they also need healthy homes, healthy food, adequate transportation and education, a steady income, safe neighborhoods and a home life free from domestic violence — things hospitals and doctors can’t provide, but that in the long run are as meaningful as an antibiotic or an annual physical.

Researchers have known for decades that social problems such as unstable housing and lack of access to healthy foods can significantly affect a patient’s health, but efforts by the health industry to take on these challenges didn’t really take off until 2010 with the passage of the ACA. The law spurred changes in how insurers pay health providers — moving them away from receiving a set fee for each service to payments based on value and patient outcomes.

As a result, hospitals now have a financial incentive to help patients with nonclinical problems — such as housing and food insecurity — that can affect health.

Temple University Health System in Philadelphia launched a two-year program last year to help 25 homeless Medicaid patients who frequently use its emergency room and other ERs in the city by providing them free housing, and caseworkers to help them access other health and social services. It helps them furnish their apartments, connects them to healthy delivered meals and assists with applications for income assistance such as Social Security.

To qualify, participants had to have used the ER at least four times in the previous year and had at least $10,000 in medical claims that year.

Temple has seen promising results when comparing patients’ experiences before the study to the first five months they were all housed. In that time, the participants’ average number of monthly ER visits fell 75% and inpatient hospital admissions dropped 79%.

At the same time, their use of outpatient services jumped by 50% — an indication that patients are seeking more appropriate and lower-cost settings for care.

Living Life as ‘Normal People Do’

One participant is Rita Stewart, 53, who now lives in a one-bedroom apartment in Philadelphia’s Squirrel Hill neighborhood, home to many college students and young families.

“Everyone knows everyone,” Stewart said excitedly from her second-floor walk-up. It’s “a very calm area, clean environment. And I really like it.” 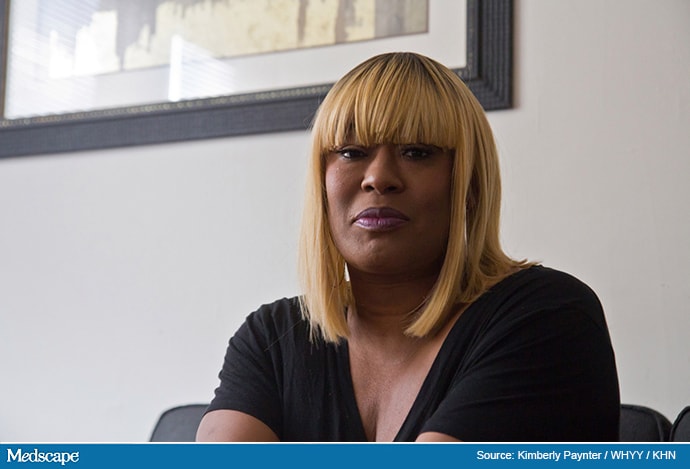 Since moving into her own place, Rita Stewart says she feels healthier, supported, and hasn’t gone to the ER.

Before joining the Temple program in July and getting housing assistance, Stewart was living in a substance abuse recovery home. She had spent a few years bouncing among friends’ homes and other recovery centers. Once she slept in the city bus terminal.

In 2019, Stewart had visited the Temple ER four times for various health concerns, including anxiety, a heart condition, and flu.

Stewart meets with her caseworkers at least once a week for help scheduling doctor appointments, arranging group counseling sessions and managing household needs.

“It’s a blessing,” she said from her apartment with its small kitchen and comfy couch.

“I have peace of mind that I am able to walk into my own place, leave when I want to, sleep when I want to,” Stewart said. “I love my privacy. I just look around and just wow. I am grateful.”

Stewart has sometimes worked as a nursing assistant and has gotten her healthcare through Medicaid for years. She still deals with depression, she said, but having her own home has improved her mood. And the program has helped keep her out of the hospital.

“This is a chance for me to take care of myself better,” she said.

Her housing assistance help is set to end next year when the Temple program ends, but administrators said they hope to find all the participants permanent housing and jobs.

“Housing is the second-most impactful social determinant of health after food security,” said Steven Carson, a senior vice president at Temple University Health System. “Our goal is to help them bring meaningful and lasting health improvement to their lives.” 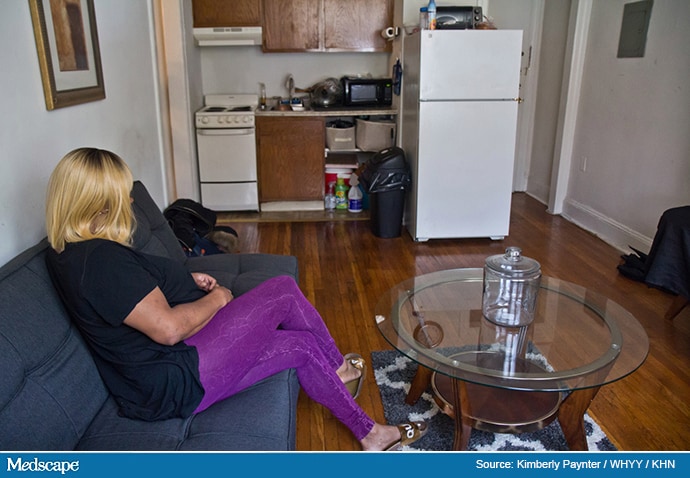 Temple is helping pay for the program; other funding comes from two Medicaid health plans, a state grant and a Pittsburgh-based foundation. A nonprofit human services organization helps operate the program.

Program organizers hope the positive results will attract additional financing so they can expand to help many more homeless patients.

The effort is expensive. The “Housing Smart” program cost $700,000 to help 25 people for one year, or $28,000 per person. To put this in perspective, a single ER visit can cost a couple of thousands of dollars. And “frequent flyer” patients can tally up many times that in ER visits and follow-up care.

If Temple wants to help dozens more patients with housing, it will need tens of millions of dollars more per year.

Still, Temple officials said they expect the effort will save money over the long run by reducing expensive hospital visits — but they don’t yet have the data to prove that.

The Temple program was partly inspired by a similar housing effort started at two Duke University clinics in Durham, North Carolina. That program, launched in 2016, has served 45 patients with unstable housing and has reduced their ER use. But it’s been unable to grow because housing funding remains limited. And without data showing the intervention saves on healthcare costs, the organizers have been unable to attract more financing.

Often there is a need to demonstrate an overall reduction in healthcare spending to attract Medicaid funding.

“We know homelessness is bad for your health, but we are in the early stages of knowing how to address it,” said Dr Seth Berkowitz, a researcher at the University of North Carolina-Chapel Hill.

Results Remain to Be Seen

“We need to pay for health not just healthcare,” said Elena Marks, CEO of the Houston-based Episcopal Health Foundation, which provides grants to community clinics and organizations to help address the social needs of vulnerable populations.

The nationwide push to spend more on social services is driven first by the recognition that social and economic forces have a greater impact on health than do clinical services like doctor visits, Marks said. A second factor is that the US spends far less on social services per capita compared with other large, industrialized nations.

“This is a new and emerging field,” Marks said when reviewing the evaluations of the many social determinants of health studies. “The evidence is weak for some, mixed for some, and strong for a few areas.”

But despite incomplete evidence, Marks said, the status quo isn’t working either: Americans generally have poorer health than their counterparts in other industrialized countries with more robust social services.

“At some point we keep paying you more and more, Mr. Hospital, and people keep getting less and less. So, let’s go look for some other solutions” Marks said.

The Medicaid interventions are not intense in many states: Often they involve simply screening patients for social needs problems or referring them to another agency for help. Only two states — Arizona and Oregon — require their Medicaid health plans to directly invest money into pilot programs to address the social problems that screening reveals, according to a survey by consulting firm Manatt.

The Centers for Medicare & Medicaid Services, which is funding a growing number of efforts to help Medicaid patients with social needs, said it “remains committed” to helping states meet enrollees’ social challenges including education, employment and housing.

On Jan. 7, CMS officials under the Trump administration sent guidance to states to accelerate these interventions. In May, under President Joe Biden, a CMS spokesperson told KHN: “Evidence indicates that some social interventions targeted at Medicaid and CHIP beneficiaries can result in improved health outcomes and significant savings to the healthcare sector.”

The agency cited a 2017 survey of 17 state Medicaid directors in which most reported they recognized the importance of social determinants of health. The directors also noted barriers to address them, such as cost and sustainability.

“We are trying to find the magic sauce to keep this program running,” said Patrick Vulgamore, project manager for Temple’s Center for Population Health.

This story is part of a partnership that includes WHYY, NPR and KHN.