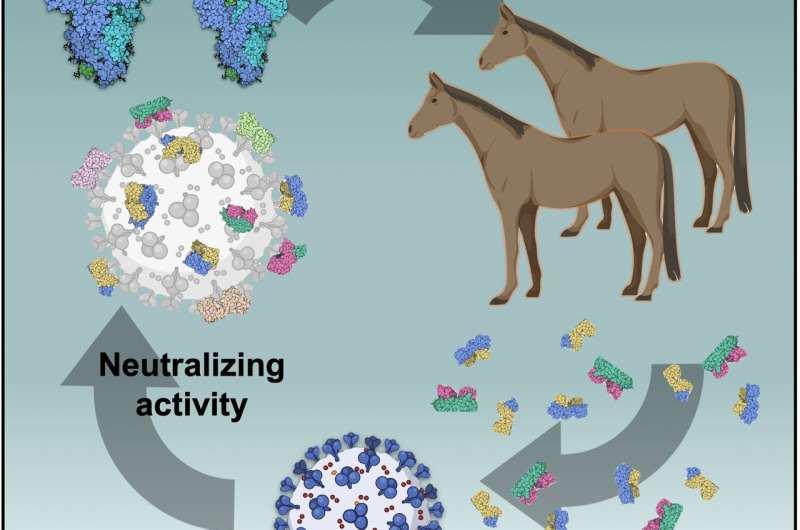 A study conducted by a consortium of Brazilian researchers has demonstrated that a hyperimmune serum consisting of purified antibody fragments produced in horses may be an efficient approach to combat COVID-19. Tests conducted in hamsters improved the animal clinical conditions. The neutralizing activity of the sera developed by the scientists has been proved to be high against the P.1 (Gamma) and P.2 variants. The results have been published in iScience.

The research opens up the possibility for the development of passive immunization or treatment against SARS-CoV-2 infection. “By using the trimeric spike protein of SARS-COV-2 to immunize horses, a cocktail of purified IgG fragments (F(ab’)2) showing very high neutralizing activity was developed. This might be a useful countermeasure against COVID-19, with the added advantages of being an affordable alternative that can be produced in horse serum production facilities available worldwide,” says Professor Leda Castilho, from the Federal University of Rio de Janeiro, who coordinates the laboratory that produces the recombinant spike protein used for horse hyperimmunization.

The scientists are confident of the efficiency of the new product. “The main finding in our study is that the equine hyperimmune globulins antibodies developed against the spike protein of the ancestral SARS-CoV-2 had high neutralizing action against the new variants of the virus, such as the gamma strain. The polyclonal nature explains this high potency, which can be tailored now by using a combination of mutant spike protein from different variants as antigens,” says Professor Jerson L. Silva, from the Federal University of Rio de Janeiro, and coordinator of the study.

Equine immunization is a well-known and easily scalable technology proven to generate high titers of neutralizing antibodies, and has been used to treat many diseases, such as rabies, tetanus, and snake envenomation.

Since equine antivenom products are routinely produced in both high and low-income countries, the Brazilian strategy could be easily reproduced in any part of the world and could be rapidly tested as a therapy or passive immunization tool for COVID-19.

Previous works on equine hyperimmune sera against SARS-CoV and MERS-CoV had shown positive results for these closely related betacoronaviruses. Another recent study has shown that the recombinant receptor-binding domain (RBD) of the SARS-CoV-2 S protein could stimulate antibody production in mice and equines.

In the Brazilian study, the scientists used the recombinant trimeric spike (S) glycoprotein to immunize horses for the production of hyperimmune globulins against SARS-CoV-2. The technique combines the advantages of using an antigen that closely resembles its state on the surface of the native virus with the biosafety advantages related to using a recombinant immunogen.

After developing the horse hyperimmune F(ab’)2 concentrate, the group carried out challenge tests in hamsters, injecting the substance into the animals. The researchers evaluated the pretreatment and treatment after SARS-CoV-2 infection.

The results showed the ability of the treatment to reduce viral load in pulmonary tissues, and to improve the animal clinical conditions, as reflected by weight gain. All intervention schemes protected the animals against weight loss in the acute phase of the disease. Non-treated animals showed an increased weight loss, whereas pre-treatment resulted in no body weight reduction.