The brain-zapping helmet that could help to cure dementia: Scientists say device which shines light directly into the brain could be a ‘game-changer’

A helmet that zaps your brain with infrared light could help cure dementia, a study has found.

Researchers from Durham University have developed a device which shines light directly into the brain through the skull.

A trial found that wearing the helmet twice a day for six minutes at a time boosted memory, motor function and brain processing skills in healthy adults.

The scientists said that if the results were replicated in people with dementia it could be a ‘game-changer’ in the fight against the incurable disease, which affects 850,000 Britons.

The £7,250 helmet works through a process called ‘photo biomodulation’ where pulses of infrared light are directed deep into the brain. 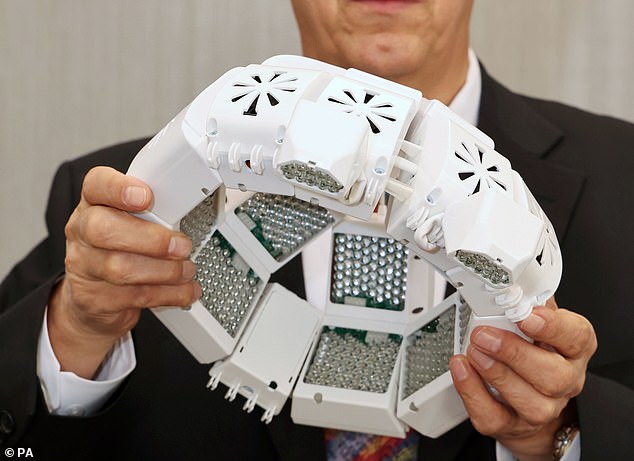 The study saw 14 healthy Britons wear the helmet (pictured) for six minutes twice a day for one month, with infrared light was beamed into their brains at a wavelength of 1068 nanometres 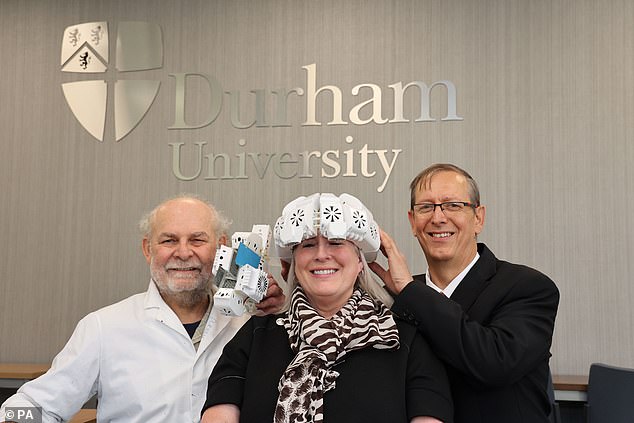 Lead researcher Dr Paul Chazot (left), who has spent 20 years of studying particular infrared wavelengths for dementia treatment, pictured with GP Dr Gordon Dougal, who devised the helmet and Tracy Sloan who used it to improve her memory

It was devised by Dr Gordon Dougal, a GP in County Durham who worked with scientists to trial the so-called transcranial photobiomodulation therapy (PBM-T).

The study saw 14 healthy Britons, aged 45 and over, wear the helmet for six minutes twice a day for one month, with infrared light was beamed into their brains at a wavelength of 1068 nanometres.

A control group of 13 people who used a dummy helmet, and both groups were set tests before and after the treatments.

The researchers noted a significant improvement in performance in motor function, memory and brain processing speed, for those using the real helmet over those given the placebo.

They said the ‘rapid improvement in memory performance’ suggests infrared light treatment could be a ‘game-changing therapy’ for people with dementia. Further research will seek to establish if it could help reverse Alzheimer’s.

He added: ‘Much more research is needed to fully understand the mechanism of action.’ Research has shown wavelengths of infrared light help reverse nerve cell damage in dementia patients.

The treatment boosts mitochondria which gives cells their energy, which stimulates the brain to activate immune cells that sweep away toxic proteins linked to dementia.

They hope the helmet might also be beneficial to other disorders, such as Parkinson’s, traumatic brain injury or motor neurone disease.

It can be easily worn by patients, meaning the therapy can be readily delivered at home.

Lead researcher Dr Paul Chazot, who has spent 20 years of studying particular infrared wavelengths for dementia treatment, said: ‘We’ve shown what appears to be real improvements in memory and other neurological processes for healthy people when their brains are exposed to a specific wavelength of infrared light for consistent, short periods of time.

‘While this is a pilot study and more research is needed, there are promising indications that therapy involving infrared light might also be beneficial for people living with dementia and this is worth exploring.

‘Indeed, we and our US research collaborators recently also published a new independent clinical study which provides the first evidence for profound and rapid improvement in memory performance in dementia.

‘This could provide a novel disease-modifying strategy for dementia, with the potential to alleviate many of the serious problems faced by people with dementia and reduce the burden on their caregivers.’

Last year a study in the US on 228 people found infrared treatment had a positive effect on people with mild to moderate dementia.

The research is published in the journal Photobiomodulation, Photomedicine and Laser Surgery.

WHAT IS DEMENTIA? THE KILLER DISEASE THAT ROBS SUFFERERS OF THEIR MEMORIES

Dementia is an umbrella term used to describe a range of progressive neurological disorders (those affecting the brain) which impact memory, thinking and behaviour.

There are many different types of dementia, of which Alzheimer’s disease is the most common.

Some people may have a combination of types of dementia.

Regardless of which type is diagnosed, each person will experience their dementia in their own unique way.

Dementia is a global concern but it is most often seen in wealthier countries, where people are likely to live into very old age.

HOW MANY PEOPLE ARE AFFECTED?

The Alzheimer’s Society reports there are more than 850,000 people living with dementia in the UK today, of which more than 500,000 have Alzheimer’s.

It is estimated that the number of people living with dementia in the UK by 2025 will rise to over 1 million.

In the US, it’s estimated there are 5.5 million Alzheimer’s sufferers. A similar percentage rise is expected in the coming years.

As a person’s age increases, so does the risk of them developing dementia.

Rates of diagnosis are improving but many people with dementia are thought to still be undiagnosed.

IS THERE A CURE?

Currently there is no cure for dementia.

But new drugs can slow down its progression and the earlier it is spotted the more effective treatments are.