Home » Health News » He wrote a best-selling book about finding happiness. Is he happy?

It’s been just over six years since Mark Manson wrote The Subtle Art Of Not Giving A F*ck. The advice book has gone on to sell 15 million copies.

The question is: do people still want to take their self-help tips from someone who spruiks their guidance by writing, “HEY F—FACE, THIS EBOOK WILL CHANGE YOUR LIFE IN LIKE 12 SECONDS OR SOMETHING”? 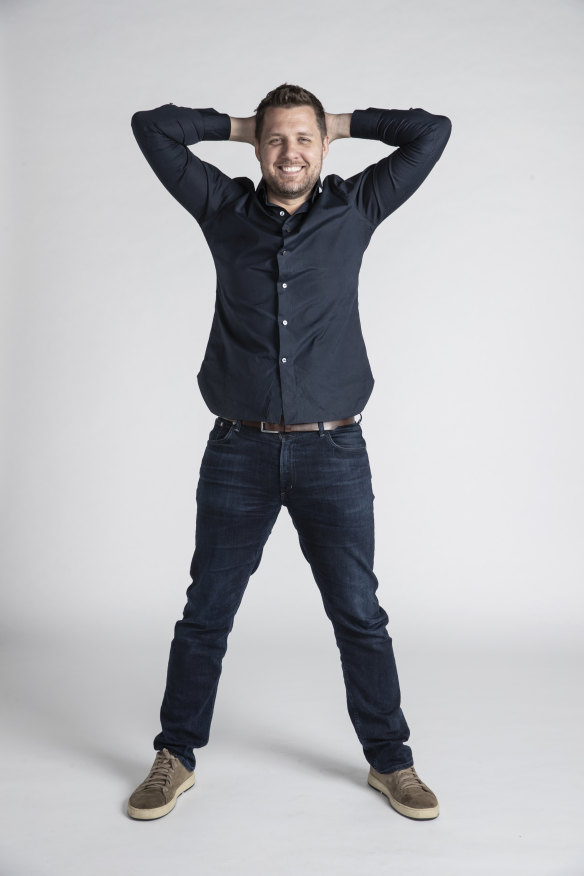 “The more we think about our own deaths or mortality, the more it clarifies what’s important when we’re alive,” says Mark Manson.Credit:Louie Douvis

This line appears on Manson’s website, which shuns “powder-puff” self-help platitudes like “Don’t sweat the small stuff” for the therapeutic equivalent of a punch in the face. (In a nutshell: you’ll only become content when you realise you’re not special, your “f—ing dreams are narcissistic delusions”, and your problems are of your own making.)

And the answer is, yes, yes, they do.

“It’s really funny, I get a lot of parents who are like, ‘I want to share [the book] with, like, my 12-year-old, but can I edit out all the profanity [when I read it to them]?’” says Manson, over a video call from his nearly empty office in Los Angeles. “I’m like, ‘Yeah, sure.’” (One chapter ends with the phrase, “Namaste, bitch.”)

His “super-fans”, the ones who send him emails that read, “You’ve changed my life”, are mostly men, he says.

But his fans come from far and wide. Chris Hemsworth, actor Will Smith – who sought him out to co-write his 2021 biography, Will – and comedian Chelsea Handler have all sung his praises. Manson regularly gives on-line seminars teaching people from Dubai to Winnipeg about how to give less f—s. Our call is timed to promote his documentary, The Subtle Art Of Not Giving A F*ck, which debuts today.

Why, exactly, have Manson’s teachings resonated so far and wide? They’re simply a rehashing of age-old life lessons from more learned sources like the Islamic philosopher Rumi and the ancient Greek philosophers known as the Stoics, but told through the lingo of a drunken frat boy.

His presentation of himself in the documentary as a wiser-than-you guru who’s seen it all can also make for a queasy viewing experience. At 38, Manson, a one-time pick-up artist who previously spent years bragging about how many women he bedded and sold dating advice to men, spends much of the film leaning back in a chair in a darkly lit room speaking earnestly about the “traumatic shit” that led to his philosophy for how we should all live, in order to be happy. This includes: being kicked out of school at 13 for doing drugs, being dumped by his girlfriend in his early 20s, and having a friend drown when he was 19.

“So people with a sense of humour, it tends to be younger people,” says Manson, of who flocks to his teachings. “I often joke that I write self-help for people who hate self-help.” The author, who grew up in Texas troubled by the breakdown of his family, was always interested in “personal growth”. But the self-help books he found were “very woo-woo, touchy-feely and just, cheesy”. “So I wanted to write content that wasn’t like that. And I guess it appeals to other people who feel the same way.”

And, though Manson doesn’t say it, some still see him as something of an oracle. (“What do you think is the remedy to solve most problems the world is facing right now?” one person wrote to him on Instagram in December.)

But he’s the first person to admit that he doesn’t always follow his own advice. The key to being generally content, he’s long preached, is to be conscious about what we give our time and energy – our ‘f—s’ – to. Choose wisely, whether it’s devoting time and energy to a pursuit that enriches you, or to people you love, and you’ll live a life of meaning.

Choose badly – often by prioritising in-the-moment pleasure and external validation – and, you just might end up plotting the murder of a perfect stranger who has inconvenienced you in a small way.

“Yesterday I was flying home, and the lady at the checkout counter kept screwing up the check-in, and I was, like, losing my shit,” he says. He needed to return home to conduct two days of press interviews to promote the documentary. “I was like, ‘If I miss this flight because this woman can’t fucking get my passport right, like, I am going to murder somebody…’ I just fume a lot. And I’m very passive-aggressive.”

“I think there was a little bit of insecurity of like, ‘This is my 15 minutes, I need to say yes to everything’,” says Manson, referring to why, following the release of his blockbuster book, he took on researching Smith’s autobiography, writing a follow-up tome, Everything is F*cked, and an audio book about how to navigate romantic relationships all at the same time.

He asked Will Smith for his advice.

“I said, ‘I’m losing my mind. How did you stay sane?’” says Manson, noting that Smith had once filmed a movie and made an album while filming The Fresh Prince of Bel-Air during a period in the 1990s. “He kind of said, ‘Whatever your expectation is of your own limit, you can actually go like 20, 30 per cent beyond that. You’ve just never let yourself believe it.’ He was right, like, I did go beyond what I was capable of doing.”

But Manson started having chest pains.

“And the doctor was like, ‘Dude, you need to take a f—ing vacation. What are you doing?’” says Manson, whose family has a history of heart disease.

“I wouldn’t agree to say ‘yes’ to everything [again],” the author says, having learned his lesson.

Instead, he’s lately been hanging out with his wife, a Brazilian wellness influencer Fernanda Neute. “Getting engaged [in 2015] was actually very profound,” he says. “I used to [be constantly thinking], ‘Oh, she’s cute, do I think I could get with her?’ Or, ‘Maybe if it doesn’t work out with this one, maybe I’ll date that one,’” he says. Now, finally, he’s content.

This is because he followed his own advice. That is, he owned up to the fact that: his previous fear of commitment wasn’t unique (it resulted from his parents’ divorce); he was the one making himself “miserable” with the constant search for pleasure in the form of anonymous sex; and he was the only person responsible for fixing his problem.

After dabbling with the idea of writing a screenplay about the self-help industry, he’s working on a new book. It won’t come out until next year, and he’s in no rush to get it done.

“I don’t know if any one of us ever completely figure it out,” he says of adhering to his own template for living. “It’s kind of like trying to get better at honesty. Nobody’s ever completely honest, but you can lie less than you did before.”

The Subtle Art Of Not Giving A F*ck is available to be downloaded digitally from today.