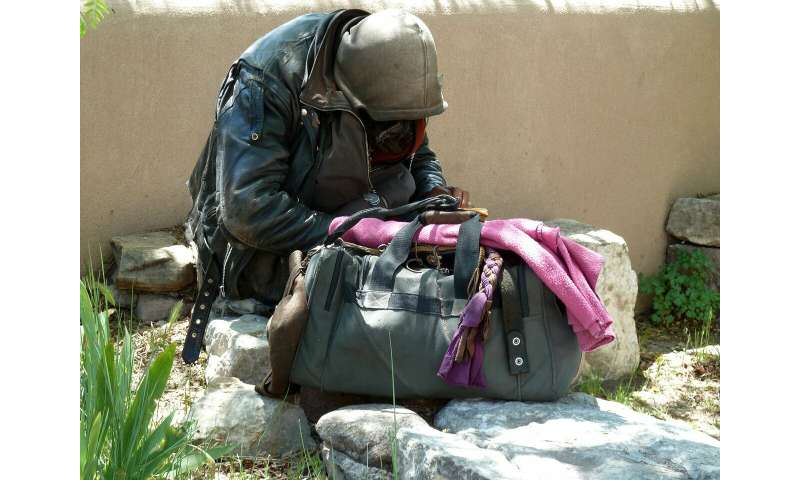 A systematic review and meta-analysis on the prevalence of traumatic brain injury (TBI) in people who are homeless or in unstable housing situations—including 38 studies published between 1995 and 2018, and published in The Lancet Public Health journal—suggests that homeless people experience a disproportionately high lifetime prevalence of TBI.

The authors call for healthcare workers to have increased awareness of the burden and associated effects of TBI in people who are homeless, noting that more comprehensive assessments of their health—including checking for history of TBI—may help improve their care.

Lead author Jacob Stubbs, University of British Columbia, Canada, says: “Traumatic brain injury may be an important factor in the complex health challenges faced by this population. Our work emphasizes that health care professionals and frontline workers should be aware of the burden of TBI in this population, and how it relates to health and functioning.”

In the U.S. and EU, more than six million people experience homelessness each year, and homeless people are known to experience poorer mental and physical health than the general population. While often preventable, TBI is a pervasive and underrecognized public health problem linked with subsequent development of neurological and psychiatric disorders.

The authors looked at existing studies from six high-income countries—Australia, Canada, Japan, South Korea, the UK, and the U.S.—which included people of any age who were either homeless, in unstable housing situations, or seeking services for homeless people. They examined the number of new cases and existing cases of TBI, and the association between TBI and health or functioning outcomes.

In their systematic review, they included 38 studies and reviewed the association between TBI and health or functioning outcomes in this population (e.g. mental health and health service use). They then conducted a meta-analysis (including 26 studies with data on how many of the participants had a history of TBI to estimate the lifetime prevalence of all TBIs and moderate or severe TBIs.

Their findings also suggested that TBI is consistently associated with poorer self-reported physical and mental health, suicidality and suicide risk, memory concerns, increased health service use and higher criminal justice system involvement. They note that these links will need to be confirmed in further research, including prospective study designs to establish incidence rates more accurately, as well as for public health research and practice to focus on TBI prevention and more thoroughly understanding the consequences of TBI in this vulnerable population. The possibility of TBI creating risk for age-related cognitive disorders in this group is largely unexplored.

Jehannine Austin, British Columbia Mental Health and Substance Use Services Research Institute, Canada, says: “The relationship between homelessness and TBI could function both ways—TBI and homeless could increase the risk of homelessness, and homelessness could increase the risk of TBI. We need a better understanding of this relationship to address the issue, and to improve outcomes in the homeless and marginally housed population.”

The authors note that their findings suggest that the provision of stable housing might lower the risk for TBI, and confirm more research is needed to study how this benefits people who are homeless or in unstable housing situations.

The authors note some limitations of their study. Their prevalence estimates are limited by the quality of the studies included and differences in study design. For example, some studies used different data collections methods and varying definitions of TBI. The authors believe that these limitations may mean that their estimate (53 percent) is actually an underestimate of the burden of TBI in this population. They were also unable to determine the directionality of the relationship between TBI and homelessness because most studies included were retrospective.