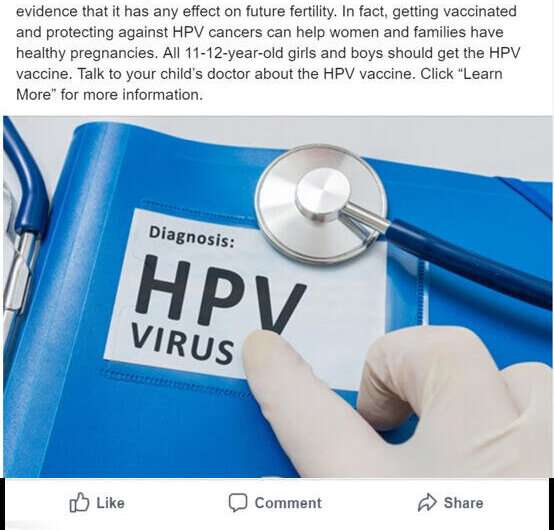 Research led by Virginia Commonwealth University’s School of Medicine is providing new insight into how to best fight misinformation about vaccines and promote vaccination. By testing different science-based messages related to the human papillomavirus (HPV) vaccine, the researchers uncovered four themes that were effective in shifting parents’ attitudes about getting their children vaccinated. Their results were published in the Journal of Medical Internet Research.

HPV is the most common sexually transmitted infection in the United States. In 2018, there were 43 million HPV infections in the U.S., including 13 million new ones, according to estimates from the Centers for Disease Control and Prevention. In most cases, people recover from HPV over time without major health problems, but some end up developing genital warts, cervical cancer or other forms of cancer.

HPV vaccines have been shown to safely and effectively reduce the risk of infection and cancer, but the vaccination rate in the U.S. is significantly low compared to other developed countries. Only 51% of American teens were fully vaccinated against HPV as of 2018. This is partly because an increasing number of parents have negative attitudes about the vaccine and are hesitant to vaccinate their children.

“Even though the HPV vaccine is free for most people and widely available in the U.S., there are psychological barriers that prevent some parents from vaccinating their children. This includes fears, uncertainties or negative connotations about the HPV vaccine that are not based on scientific evidence,” said Sunny Jung Kim, Ph.D., an assistant professor in the VCU School of Medicine’s Department of Health Behavior and Policy, co-director of the Health Communication & Digital Innovations shared resource at VCU’s Massey Cancer Center, and lead author of the new study.

Experts believe that the spread of misinformation online is a major contributor to parental resistance to the HPV vaccine. Studies have shown that myths and conspiracies related to the HPV vaccine have become especially pervasive on social media.

While social media and other forms of mass communication have played a major role in disseminating anti-vaccination sentiments, public health organizations can also harness these channels to counter misinformation and promote vaccination. According to Kim, the key to making an impact through social media is by using talking points that are most compelling for hesitant parents.

“We know that social media campaigns can be a powerful tool for fighting vaccine misinformation and shifting public perceptions, but we didn’t really know which messages would have the most influence on parents,” Kim said.

To answer this question, Kim and colleagues from the Geisel School of Medicine at Dartmouth conducted a series of focus group discussions with parents about the HPV vaccine. From these talks, they identified overarching themes for why some people choose to not vaccinate their children against HPV. Topics included concerns over the ingredients used in HPV vaccines, skepticism over the intentions of the health care system, and fear of potential adverse effects of vaccination, among others.

The researchers then crafted different messages to address these fears, myths and uncertainties. Using information from credible scientific sources, the team designed messages to help parents understand HPV and HPV vaccines, counter common myths and encourage them to vaccinate their children.

The research team tested the effectiveness of the promotional messages through online surveys, collecting information from nearly 1,000 parents about their knowledge of HPV, attitudes toward the HPV vaccine and willingness to vaccinate their children. The results revealed that messages addressing the following four themes positively influenced a parent’s perception of the HPV vaccine and increased their likelihood of getting their children vaccinated:

The researchers also discovered that messages correcting common misconceptions or citing scientific evidence from government agencies (such as the CDC) were the most effective in influencing a person’s opinion about the HPV vaccine.

Kim said the results of the research could inform public health organizations on the best messaging strategies for media campaigns about HPV vaccines, and potentially even other vaccines.

“We know that the spread of misinformation and misconceptions online has created psychological barriers for other vaccines as well, like the COVID-19 vaccine. Our research has shown that, with the right communication strategies, we can help break down these barriers.”