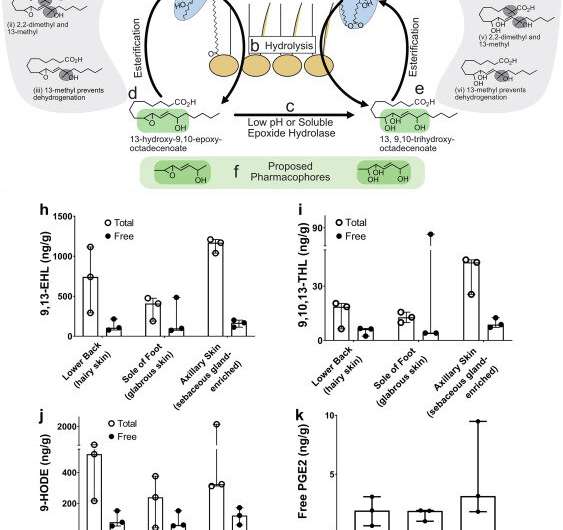 A common fatty acid found in the Western diet breaks down into compounds that contribute to increased temperature and pain—but not itch—sensitivity in psoriatic lesions. The finding could lead to better understanding of how lipids communicate with sensory neurons, and potentially to improved pain and sensitivity treatments for psoriasis patients.

Linoleic acid is a fatty acid found in vegetable oils, nuts and seeds, and is one of the predominant fatty acids found in the Western diet. Metabolites from linoleic acid—the products formed when the body breaks it down through digestion—play a role in skin barrier function.

“We noticed high levels of two types of lipids derived from linoleic acid in psoriatic lesions,” says Santosh Mishra, associate professor of neuroscience at North Carolina State University and corresponding author of the research. “That led us to wonder whether the lipids might affect how sensory neurons in these lesions communicate. We decided to investigate whether their presence could be related to the temperature or pain hypersensitivity that many psoriasis patients report.”

The research team used mass spectrometry to create lipid profiles of skin from psoriatic lesions. They focused on two types of linoleic acid-derived lipids, or oxylipids: 13-hydroxy-9,10-epoxy octadecenoate (9,13-EHL) and 9,10,13-trihydroxy-octadecenoate (9,10,13-THL). The first form, 9,13-EHL, can convert into the more stable 9,10,13-THL form via interaction with certain enzymes.

The researchers found that while both forms bind to receptors on sensory neurons within the skin, the more stable form—9,10,13-THL—had a longer lasting effect than 9,13-EHL.

They also found that once the lipids bind to the neuronal receptor, they activate the neurons expressing TRPA1 and TRPV1 receptors that are involved in temperature and pain hypersensitivity, opening communications channels to the central nervous system.

Interestingly, the lipids did not have any effect on itch.

“It was surprising that these lipids could create hypersensitivity but not impact itch sensation, which is usually the most troublesome symptom associated with psoriasis,” Mishra says. “This most likely has to do with how the neuron is activated—a mechanism we still haven’t uncovered.”

Now that an association between linoleic acid and hypersensitivity to temperature and pain has been established, the researchers want to further explore exactly how this response is being created. They hope that the answers may lead to solutions that can relieve these symptoms in psoriasis patients.