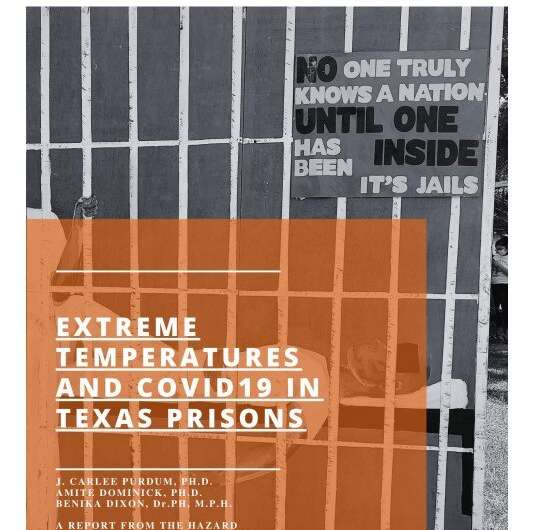 As millions of Americans continue to sweat through triple-digit temperatures this week, the incarcerated population within most of Texas’ prisons are living without air conditioning. According to a new report, dying from heat is a common fear among inmates—and the failure to mitigate the issue is systemic.

“With our prisons not having air conditioning, it’s a really dangerous situation,” she said. “When we have a heat wave such as this summer, it can potentially lead to disastrous consequences.”

Purdum is the lead author of the new report released this month by Texas A&M’s Hazard Reduction and Recovery Center and the advocacy group Texas Prisons Community Advocates. Benika Dixon, visiting assistant professor at the School of Public Health, is also a co-author. The authors say in the report that while 87% of U.S. households have air-conditioning, only 20% of Texas prison units are fully air-conditioned. Texas is one of at least 13 states without universal air conditioning in state prisons.

Without it, the report says, the system will remain under extreme stress, putting the population at risk for health emergencies: “This could kill them, but if it doesn’t, it will certainly degrade their health over time.”

The report scrutinizes current heat mitigation policies used by the Texas Department of Criminal Justice (TDCJ), and the findings are informed by surveys from 309 incarcerated individuals collected between June 2018 and 2020. The inmates’ responses paint a grim picture of life inside prison during the summer.

“Every summer I battle with heat rash and it’s maddening,” one person wrote. Others describe dizziness, nausea and difficulty breathing. A different inmate said they had fainted four times in their cell, but received no medical attention, and no report was filed.

The co-authors point out that incarcerated people have described the living conditions in Texas prisons during extreme heat and the COVID-19 pandemic as a “living hell.”

Purdum is a hazard scholar who studies how disasters impact vulnerable populations. TDCJ heat mitigation procedures, like providing constant access to water and ice, showers and cooled respite areas where people can cool down, she said, are “not enough.”

“They’re extremely inefficient, and that’s because it’s an enormous demand on staff and on resources when you have 120,000 people who need access to those resources very day. It really becomes an impossible solution.”

According to the report, at least 79 incarcerated people and prison staff reported heat-related illnesses from January to October 2018. And since 1998, TCDJ has recorded at least 23 heat-related deaths. But as Purdum stressed to the House Appropriations Committee, the impact of heat is still “wildly underestimated.”

It’s difficult to tie specific deaths to heat, she said. A person who dies of a heart attack, for example, may not have died from heat exposure directly, but exposure to excessive heat continuously degrades a person’s health over time. “So that person might not have had that heart attack or had those health issues if they weren’t in hazardous conditions every day,” Purdum said.

She also believes heat was a contributing to factor to COVID-19 deaths in prisons, making it more difficult for infected individuals to fight off the virus. The report also states the pandemic led to lockdowns throughout TDCJ and restricted access to water coolers and ice in common areas, with one man stating officers were not distributing water to inmates locked in their cells due to COVID-19 restrictions.

Purdum and her co-authors conclude TDCJ policies in place “don’t ensure quality, quantity or even that every individual will have access to heat-mitigating resources. Subsequently, there is nothing to truly hold TDCJ accountable for these failures.” The solution, Purdum said, is to mitigate exposure from heat in the first place rather than trying to mitigate its impacts.

“The only way to really do that at this point is to add air conditioning to the units and bring the temperatures down,” she said. TDCJ has previously claimed it would cost $1 billion to install air conditioning across all units, according to the report, with an additional $140 million needed annually for utilities and maintenance.

The authors state it could be argued the lack of air-conditioning is in violation of the U.S. Constitution’s Eight Amendment against cruel and unusual punishment, and the 14th Amendment guaranteeing equal protection to citizens.