Home » Health News » ‘Do it properly’: Push to double the number of mental health sessions on Medicare

A leading mental health academic has called for the government to double the number of subsidised sessions people can have with a psychologist, making adequate treatment for people with "full-blown" mental illness the priority.

But others want the scheme broadened to include people without a diagnosis of mental illness as "preventative" health care, and to expand the range of funded treatments to counselling and psychotherapy.

The federal government is reviewing the Medicare Benefits Schedule for mental health treatment, with a taskforce due to make final recommendations by the end of this year. 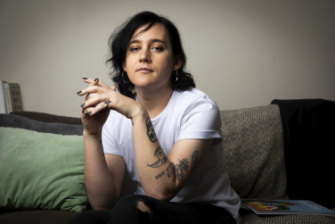 Joan Westenberg said in her experience GPs are not good gatekeepers for mental health.Credit:Renee Nowytarger

Professor Anthony Jorm at the Centre for Mental Health at the University of Melbourne said the current limit of 10 subsidised sessions in a single year was inadequate.

"If you're going to do it at all, it needs to be done properly," Dr Jorm said.

"Just like we had to educate people to finish a course of antibiotics, people need to know that you need quite a lot of psychological treatment to get the effects and two or three visits aren't going to do anything for you."

He said the research evidence suggests treatments such as cognitive behaviour therapy or interpersonal psychotherapy require at least 16 to 20 sessions to be effective.

Last year Dr Jorm published an article in the Australian & New Zealand Journal of Psychiatry arguing that use of psychologists had skyrocketed in Australia since the introduction of the Better Access scheme in 2006 but with "no discernable impact" on mental health.

Dr Jorm said most people were only visited a psychologist a few times, with spikes at six visits (when mental health treatment plans need to be reviewed) or 10 (the maximum number of subsidised sessions in a year).

The interim taskforce report on the Medicare Benefits Schedule suggested keeping 10 sessions as the maximum but allowing GPs to put them all on one referral, removing the requirement to review after six sessions.

The report also recommended GPs should be able to write a treatment plan without requiring a formal diagnosis to encourage preventative mental health treatment.

Psychotherapist Dan Auerbach said the proposal was a "very good idea" because a diagnosis of mental illness was inappropriate for life events such as grief or separation and could lead to refusal of income protection insurance.

"It takes us one step in the right direction away from medicalisation of psychological issues," Mr Auerbach said. "Years ago counselling or therapy may have been seen as somewhere you could go for some support or advice or to move through a life stage."

Mr Auerbach said the Better Access scheme should expand to include psychotherapists and counsellors as well as psychologists because they can offer different treatment that dealt with the underlying cause rather than management of symptoms.

Joan Westenberg, 31, a freelance writer from North Sydney, said she first accessed a mental health treatment plan when she was 19 for depression and then 10 years later to help her with gender transition.

In her experience, GPs were not good gatekeepers for mental health because their understanding varied and it would be better to let patients self-refer.

"The most daunting part of getting that mental health plan was the awareness that I would only get 10 sessions and this voice in my head that said 'that's not good enough, so why bother?'," Ms Westenberg said.

"It was also quite daunting to have the conversation with the doctor … you've got to start by sharing very personal things about your mental health with somebody who's not necessarily trained to hear it."