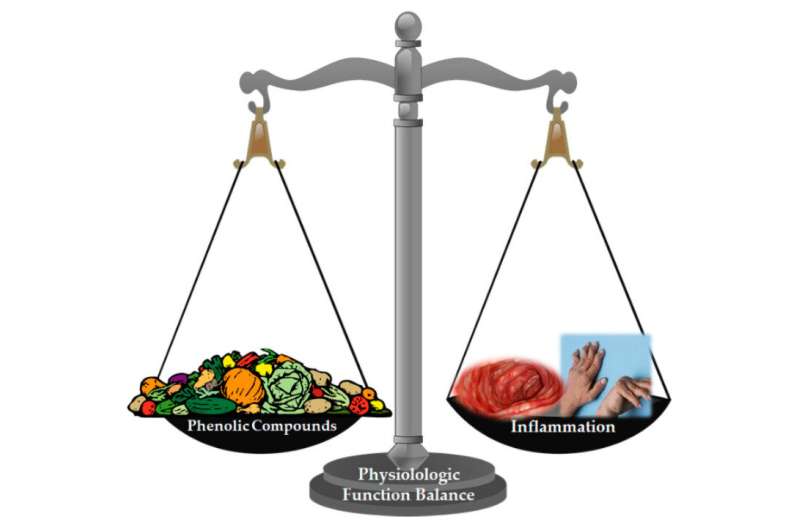 Recently, novel dietary approaches have been developed that aim to preserve health and prevent noncommunicable diseases (NCDs) such as rheumatoid arthritis and inflammatory bowel disease. An extensive body of scientific work indicates that dietary phenolic compounds have antioxidant, anti-inflammatory and antiproliferative activities that impact human health. An extensive review recently published in Pharmaceutics by Rosa Direito, Ph.D., of the Research Institute for Medicines (iMed.ULisboa) in Lisbon, Portugal, reports that new delivery systems within the field of nanotechnology could improve the efficiency of phenolic compounds when ingested by humans, providing health benefits in the form of prevention, treatment or as a complement to conventional pharmacological treatments.

NCDs are chronic diseases that are non-infectious and non-transmissible, the most common of which are obesity, diabetes, cardiovascular disease, cancer, and chronic respiratory and neurological diseases. Altogether, they are the most common causes of debility and death in the modern world, especially in the more industrialized countries. These illnesses have increased exponentially with the consumption of diets very high in fat, salt and sugar, and a rise in stress and physical inactivity. T

The number of deaths from NCDs has increased globally from 65% in 2005 to 71% in 2015. At an international level, significant advances have been made against this health threat, through the 2011 United Nations’ political declaration on NCD prevention and control, the World Health Organization’s Global Action Plan for the Prevention and Control of NCDs 2013–2020 and the integration of NCDs in the United Nation’s Sustainable Development Goals for 2030.

According to the WHO, premature deaths could be prevented through healthier eating habits with the ingestion of fruits and vegetables, which are the primary source of active phenolic compounds and some vitamins. The review also points out that epidemiological studies have time and again demonstrated that diets rich in fruits and vegetables, as well as whole grains, are deeply related to a reduced risk of developing NCDs.

The review points out that oxidative stress, inflammation, and mitochondrial alterations are inextricably linked, performing a major part in the beginning and development of NCDs, and are thus typically referred to as inflammatory chronic diseases. There is a possibility that nutritional or pharmacological manipulation of inflammation and oxidation permits for a significant decrease in the debility and mortality associated with these diseases.

Direito aimed the review at explaining the beneficial effects of some food compounds such as phenolic compounds on physiologic processes that underlie the origin of NCDs such as inflammation and oxidation. Given the enormous human and economic toll that these diseases brought on by unhealthy diets, longevity of modern populations, sedentary behaviors, pollution, etc., developing measurable and reliable quality dietary habits and supplementation could be used for nutrition guidelines globally.

Phenolic compounds are found across a wide diversity of food, and these compounds act as antioxidants, protecting human tissues against oxidative stress and conditions associated with this state. These compounds can provide an excellent model for the development of more effective and safe future chemopreventive compounds. These dietary compounds also have a direct effect on gut microbiota in terms of diversity and abundance, which in turn impacts the healthy state of individuals. New nutritional approaches may be adopted by constructing a personalized diet following microbiota analyses in order to modulate and repair a healthy gut microbiota.