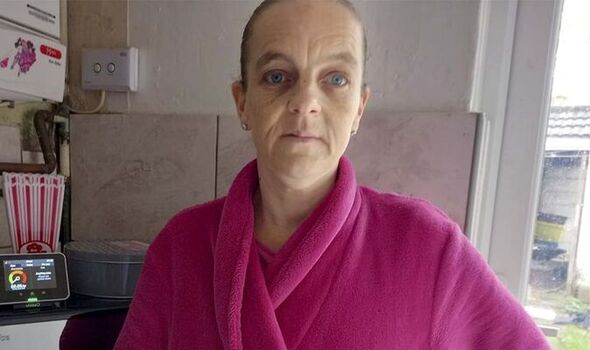 Kelly Thomson, 43, lives on £40 per week to feed herself and her two children – and says inflation hikes have already crippled her struggling family. Although Kelly’s Universal Credit covers her £1,300 monthly rent and a few other costs, she says she has just £160 a month left for everything else. The mum-of-two said rising food prices have made it near-impossible for her to feed herself as well as her own children.

She says she has lost two stone in weight because she only eats once a day, and was forced to take her daughter’s birthday gift to Cash Converters to get money for food. Twice she has ended up in hospital suffering from malnutrition, she claims – even needing blood transfusions to replenish her depleted iron levels because she can’t afford fresh food.

This comes as new Office for National Statistics data released today has revealed the UK inflation rate is the highest it’s been since 1982, at 10.1%. Kelly, who has a son, 14, and daughter, 11, said: “I hate waking up every morning and thinking ‘oh my God, not again’.

“The cost of living is crazy now and I don’t know what I’m going to do. We have nothing. I honestly feel I’m going to have to resort to begging. It’s worse now than ever before. I feel sick over seeing the new inflation rate.

“Everything is more expensive every time I go into the shop and I can’t bear to look at the gas meter. I do think about stealing but I can’t bear the thought of what would happen to my kids if I got arrested.

“I just cry every day because it’s getting worse and I feel so trapped, like I’m suffocating and there’s nothing I can do. It feels like everything is spiralling out of control – we need someone to step in and help the people that need it.”

Cost of living crisis compared to pandemic by economist

Kelly has been struggling to get by since getting long Covid in December 2020, when she was signed off from her job as a cleaner. She said during winter, she and the children used to go without power and use candles to light their home because she couldn’t afford to pay the bills.

They all cuddled up in bed together at night to keep warm – with the family relying on neighbours to heat up food. In desperation, Kelly said she took the family TV and her daughter’s smart TV she was given for her birthday to Cash Converters to buy some food.

All the money goes on food, topped up with food bank supplies, but it still leaves Kelly living on one meal a day so her children don’t starve. She gives the kids breakfast, and they get lunch in school, but she says sharing an evening meal with them is the only time she can feed herself each day.

Kelly has lost two stone since January 2021, and her size 12 clothes look three sizes too big for her. Kelly said: “I’m lucky if I get a meal a day. I just get up each morning and get on with it because I have to, I do it for my kids. I’m so worried and I cry every day. I’m so frightened I’m going to lose my mind, and I used to be such a happy person. I’m worried for my health, I’m faint with hunger all the time. I’ve fought and fought and I just don’t know what to do any more.

“In June, my children watched me collapse. I’ve never been so scared in my life and the impact on their mental health must be awful.”

She encourages the government to step in to help those most in need – before they have any more “deaths on their hands”. Kelly said: “It’s terrible. The truth is, it’s like everyone’s suffering while the people at the top are having a party.