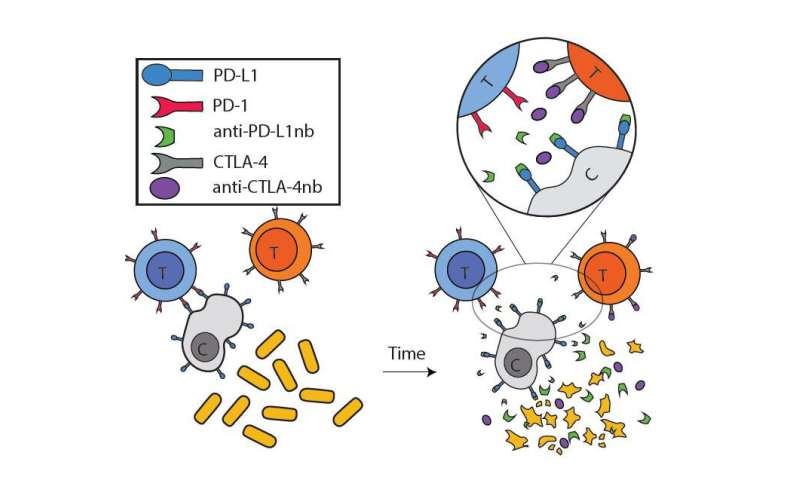 Researchers at Columbia Engineering have engineered probiotics to safely deliver immunotherapies within tumors. These include nanobodies against two proven therapeutic targets—PD-L1 and CTLA-4. The drugs are continuously released by bacteria and continue to attack the tumor after just one dose, facilitating an immune response that ultimately results in tumor regression. The versatile probiotic platform can also be used to deliver multiple immunotherapies simultaneously, enabling the release of effective therapeutic combinations within the tumor for more difficult-to-treat cancers like colorectal cancer. The study is published today in Science Translational Medicine.

Antibodies that target immune checkpoints, PD-L1 and CTLA-4, have revolutionized cancer immunotherapy treatments, achieving success in a subset of cancers. However, systemic delivery of these antibodies can also cause substantial side effects with high percentages of patients reporting adverse reactions. Furthermore, although combinations of these therapies are more effective than single therapy regimens, they also produce severe toxicities, sometimes leading to drug discontinuation. The team, led by Tal Danino, assistant professor of biomedical engineering, aimed to address these challenges.

“We wanted to engineer a safe probiotic vehicle capable of delivering immune checkpoint therapies locally to minimize side effects,” says Danino, who is also a member of the Herbert Irving Comprehensive Cancer Center and Data Science Institute. “We also wanted to broaden the versatility of the system by producing a range of immunotherapeutic combinations, including cytokines that could further elicit antitumor immunity, but are otherwise difficult to systemically deliver because of toxicity concerns.”

Bacterial cancer therapy is not a new idea: in the 1890s, William Coley, a New York City surgeon, demonstrated that injection of live streptococcal organisms into cancer patients could shrink tumors. While his method was never widely adopted because radiotherapy was discovered around the same time and antibiotics were not widely available, physicians have been using a tuberculosis vaccine, BCG, as a therapy for bladder cancer for decades. 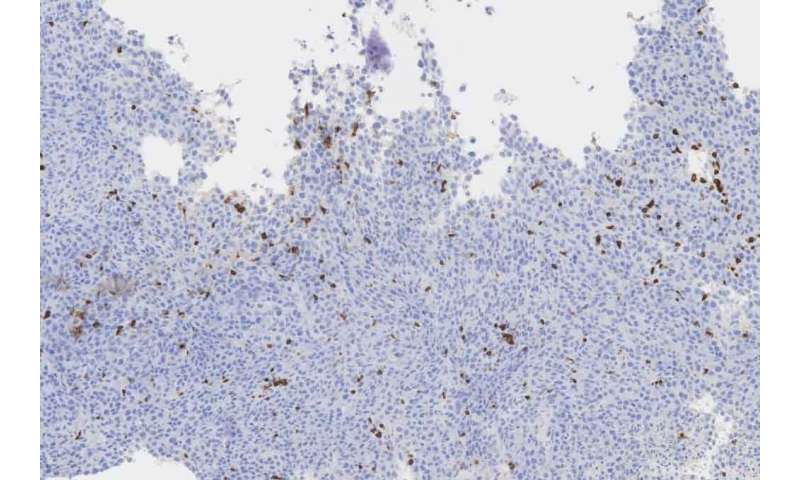 The Danino lab has pioneered engineered bacteria for cancer therapy, developing methods to characterize different strains of bacteria, therapeutics, and genetic control circuits to effectively release cancer drugs. In this most recent study, led by Ph.D. student Candice Gurbatri, they sought to engineer a translational therapeutic platform that improved upon a previous lysis circuit.

Using computational modeling, they first scanned multiple parameters to find the optimal circuit variants to maximize drug release within the tumor. This led to the integration of the circuit into the genome of a widely-used probiotic strain—E.coli Nissle 1917—resulting in a strain they call “SLIC,” or the synchronized lysing integrated circuit. This SLIC probiotic strain is naturally capable of finding and growing within tumors in the body, but the genomic integration of this circuit ensures greater stability of the system and higher levels of therapeutic release.

“We have demonstrated that the engineered bacteria remain functional and localized within the tumor as the bacteria grow in mice for at least two weeks after treatment, preventing the microbes from affecting healthy tissue,” says Gurbatri. Testing in mouse models further demonstrated that unlike previous iterations of the circuit, SLIC was able to clear tumors after a single dose, adding to its translational potential. Because the circuit is integrated into the genome, the stability of the platform greatly increases, thus negating the need for multiple injections of bacteria. 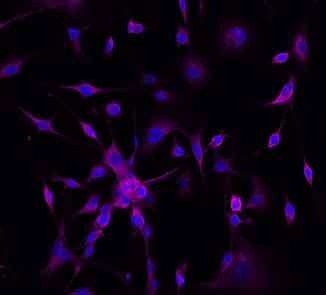 The research team used this probiotic delivery system to release nanobodies blocking PD-L1 and CTLA-4 within tumors in mouse models of lymphoma and colorectal cancer. It is already known that tumors express these checkpoints to stop the immune system, specifically T cells, from functioning properly. The goal of blocking PD-L1 and CTLA-4 is to remove the “brakes” and enable T cells to attack the cancer. A direct comparison to clinically relevant antibodies against the same target showed that their probiotic therapy was more effective, leading to complete tumor regression and prevention of metastatic formation in early and late-stage mouse models of lymphoma.

Leveraging the versatility of this system, the researchers sought to treat more difficult cancers, like colorectal, that have been less responsive to traditional immunotherapies. In this additional model, they paired the immune checkpoint nanobodies with a cytokine to further stimulate the immune system. A single dose of this probiotic cocktail resulted in tumor regression with no observed side-effects.