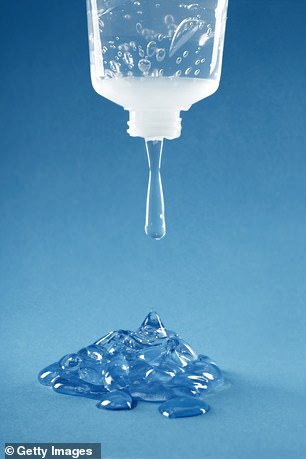 A gel rubbed on to the skin every day could slash the risk of breast cancer.

The clear and odourless gel contains a form of the anti-cancer drug tamoxifen, which has been used for years to treat women with the disease by reducing levels of the hormone oestrogen, which can help some cancers grow.

Now, scientists are carrying out a trial with healthy women to see if a gel containing the drug could prevent cancer in the first place.

The theory is that the gel will reduce breast density and slow down the rate at which healthy breast cells grow, because it will starve them of the oestrogen they need to keep multiplying.

At least one in four pre-menopausal women in the UK has dense breast tissue, which, studies show, can increase the risk of a tumour six-fold.

This means they have larger amounts of milk glands, milk ducts and connective tissue — the fibrous substance that holds everything in place.

On a mammogram (an X-ray of the breast) dense tissue shows up as a solid white area which is difficult to see through, making it harder to spot potentially cancerous growths.

Breasts that are less dense have more fatty tissue, which shows up as dark and transparent — making it easier to identify tumours.

In studies on mice, published in the journal EMBO Reports, scientists found that tamoxifen changes the environment around the tumour, so it’s less able to invade other tissues and spread — and more likely to die.

Pancreatic cancer is notoriously difficult to treat, with less than 1 per cent of patients surviving for ten years or more.

Breast density is usually inherited but declines naturally with age; more of the tissue turns to fat in later life.

It’s not clear why cancer risk is increased in those with dense breast tissue, but one theory is that it may be due simply to the higher number of cells packed into the breast. In short, there is more opportunity for cancerous mutations to develop, and once they do, the cells feed off the oestrogen that is already present in the body.

Researchers have discovered that tamoxifen can have a significant effect on the make-up of breast tissue.

A 2011 study by Queen Mary University of London, involving nearly 1,000 women with high breast density who took tamoxifen tablets daily for up to 18 months, found nearly half saw density decline by more than 10 per cent. As a result, they were 60 per cent less likely to get cancer.

Tamoxifen blocks the effects of oestrogen by binding to cells in breast tissue and preventing the hormone from ‘docking’ with them and triggering cell multiplication. But tamoxifen tablets can have debilitating side-effects, from nausea and hot flushes to blood clots and an increased risk of womb cancer.

Many women have to stay on the drug for five years after remission, but it’s estimated up to half stop taking it before then because of the side-effects. 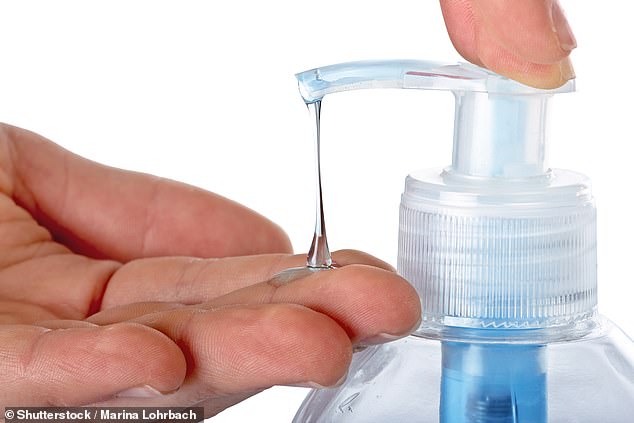 In the current trial, under way in hospitals in the U.S., Germany and Spain, 330 women aged 35 to 75 apply the tamoxifen gel, or a placebo, on their breasts daily (file picture)

The gel form is likely to be much safer because it is impregnates only breast tissue, whereas tablets circulate drugs round the body.

In the current trial — under way in hospitals in the U.S., Germany and Spain — 330 women aged 35 to 75 will apply the tamoxifen gel (called BHR-700), or a placebo, on their breasts daily.

The women all have dense breast tissue but are free of cancer. After a year, they will have another X-ray to measure the effects on tissue density. Results should be available next year.

Dr Kotryna Temcinaite, from the charity Breast Cancer Now, says: ‘Using tamoxifen in the form of a gel to reduce breast cancer risk is a really exciting prospect and could minimise the side-effects compared with taking the drug orally.

‘We look forward to the results of this trial.’

Researchers have compiled an ‘atlas’ of genes related to low bone density to help tackle osteoporosis, or fragile bones.

A Canadian study assessed data from 426,000 people and identified 518 genetic variants (of which 301 are newly discovered) which influence the development of the condition, a common age-related problem which raises the risk of fractures.

Writing in the journal Nature Genetics, the scientists said identifying so many genes offers great promise for the development of earlier tests for the disease and new, targeted drug therapies to treat it.

Taking part in Dry January cuts the amount of alcohol people are drinking even months later, report researchers at the University of Sussex. They found that drinking days dropped on average from 4.3 to 3.3 per week — even into August — while the number of units consumed on drinking days fell from 8.6 to 7.1.

Cholesterol up 20% after Christmas

Christmas overindulgence causes a spike in cholesterol levels of up to 20 per cent, a study of 25,000 Danes found.

Nine out of ten people in the Copenhagen General Population Study had elevated cholesterol — which can lead to heart attack and stroke — during this period.

The study’s authors suggest patients presenting with high cholesterol at this time should be assessed again later to judge if they really have a problem. 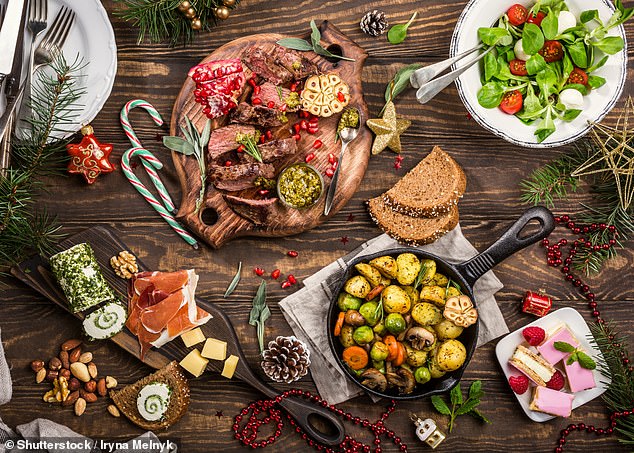 Christmas overindulgence causes a spike in cholesterol levels of up to 20 per cent, a study of 25,000 Danes found (file picture)

Measure your waist to stay motivated to exercise. A study in the journal Cell Metabolism showed 12 weeks of bicycle training reduced abdominal fat in obese people.

‘We see more people seeking treatment for aches and pains in winter,’ says Tim Allardyce, a physiotherapist from Surrey Physio in Mitcham.

‘When temperatures drop, especially if accompanied by damp weather, cases of arthritis pain and joint stiffness go up. The joints need to warm up, just like an old car, and this takes longer in the cold, so you might feel more stiff at the start of the day,’ he says. 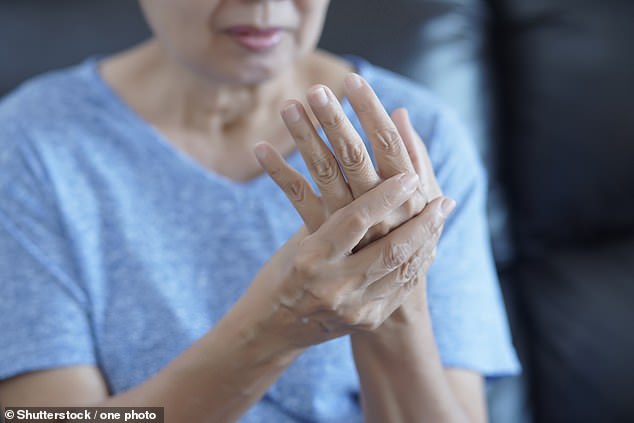 Tim Allardyce, a physiotherapist from Surrey Physio in Mitcham, said cases of arthritis pain and joint stiffness go up during the cold weather (file picture)

‘We also tend to move about less in winter — driving to the shops rather than walking, for example — and immobility causes joints to stiffen. As the days get darker, levels of vitamin D also decline.’

He suggests doing exercise, getting outside for at least 15 minutes of walking daily and taking a vitamin D supplement, or eating more vitamin D-heavy foods, such as oily fish.

How big are the bits you can’t see? The human stomach is pear-shaped and around 30cm long (the size of a large dinner plate) with a relaxed volume of around 200ml.

But it can stretch to accommodate four litres of food. It is far from the soft, floppy structure you might expect, rather being muscular and elastic.

This helps it to process food as the walls contract and relax to churn it together with enzymes and break it down. 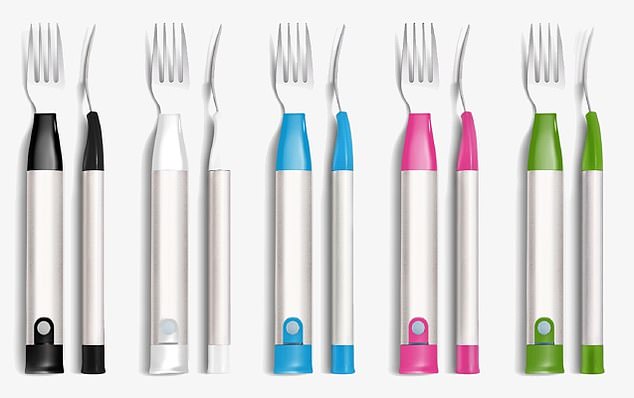 CLAIM: This is meant to slow down your eating by telling you when to put your food into your mouth.

The fork has an inbuilt sensor: if you eat too fast — fork to mouth every ten seconds — it will vibrate and flash as an alert to slow down.

‘I can imagine embarrassment using this in public as it’s much more obvious than other strategies for portion control, such as using smaller cutlery, drinking more water with meals or eating from a smaller plate.’

Jodie Kidd, pictured, said her vices include ‘a lovely bit of cheese with a big glass of red wine’

Can you run up the stairs?

And I’ve started going to the gym — I used to avoid it like the plague but, as I approached my 40s, I had to give it another go. I really enjoy it now.

Absolutely — I grow as many of my own vegetables as possible. I cook from scratch and love to create new dishes: doing TV’s MasterChef in 2014 helped me understand how different flavours go with different textures.

A treat is a lovely bit of cheese with a big glass of red wine.

I take elderberry extract for immune defence, as it’s winter bug season. And, if I’m travelling a lot, I take sachets of Emergen-C — an immune-boosting powder. I’m also into teas with antioxidant properties, such as white tea and Pu-erh [a fermented Chinese tea].

When I was filming in Nepal in 2009 for the BBC’s I Believe In Miracles, I had to be airlifted out with a vicious strain of listeria.

I started suffering from serious anxiety when I was modelling in my teens. I wasn’t sleeping well because I had an erratic schedule with long hours. I had sweaty palms, my appetite vanished and I thought I was going mad.

The beta-blockers my doctor prescribed left me walking around in a fog and, after a full-blown panic attack during Milan Fashion Week, I never did another catwalk again.

It wasn’t until I started seeing the anxiety expert Charles Linden more than 15 years ago that I understood what my body was doing. He taught me healthier coping techniques.

I use flower remedies to help keep anxiety at bay. I also see homeopaths and I believe in the power of crystals — they help to calm me down.

I’m pretty resilient. I think that’s through years of falling off horses and being shouted at to get back on, even with a broken rib or collarbone!

Pretty good these days. It’s lights out by 10pm and I sleep for eight hours.

No. The most awful thing is not being around the people you love.

Balance Your Life by Jodie Kidd and Amélie Khellaf-Govett is published by DK at £16.99.