Home » Health News » Chronic Fatigue Syndrome: Having ME has left me bedbound for eight years 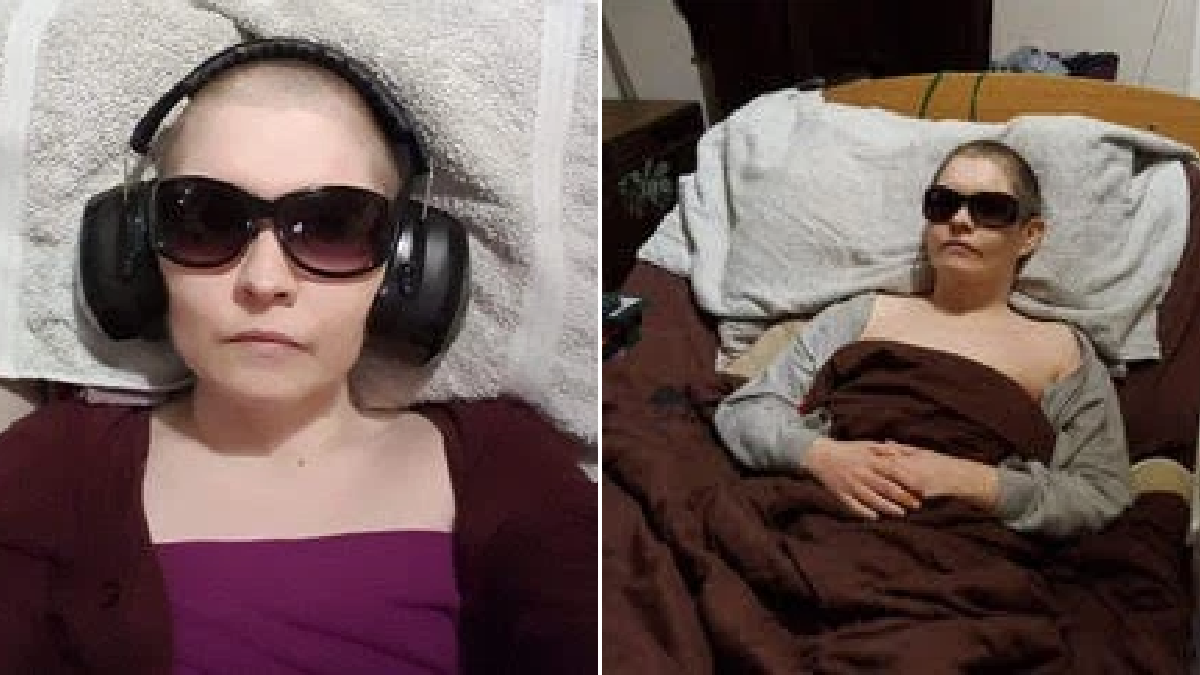 I live my life from one darkened room, with thick curtains drawn over blackout blinds. I wear earplugs because normal levels of sound are painful. I’m confined to my bed 98% of the time.

I rely on carers for even the most basic needs; I’m completely isolated from the outside world.

I was diagnosed with ME in 2006 but had been ill for about 10 years before that. Myalgic encephalomyelitis (ME), otherwise known as chronic fatigue syndrome, is a long-term multi-system disease that causes dysfunction of the neurological, immune, endocrine and energy metabolism systems.

People with ME experience debilitating pain, fatigue and a range of other symptoms. Some with severe or very severe ME may be bedbound, have trouble communicating and be tube fed.

I didn’t get a sudden onset of symptoms like many sufferers do. Instead, my health deteriorated gradually.

I had always been a sickly child, but in my teenage years things got worse. I had a succession of infections, including throat, ear and chest infections, along with numerous bouts of tonsillitis.

Hormones also triggered debilitating migraines, which completely incapacitated me for days at a time.

I had several operations for a number of health conditions, which I believe weakened me.

Shortly after, I had a particularly bad case of the flu and I never really recovered.

I struggled with overwhelming fatigue and flu-like symptoms for years before I was finally diagnosed with ME. Every GP I visited, begging for help, blamed my poor physical health on depression and anxiety, and just prescribed antidepressants or anti-anxiety meds – I was even diagnosed with PTSD by one doctor.

When I was finally given an answer, it was by a new GP who had just transferred from the local ME clinic to my doctor’s surgery. She was great and referred me to the clinic. She was very supportive but sadly, she left soon after.

I was still mobile at the beginning, but my health continued to deteriorate due to a lack of treatment and support, and stress brought on by having my health benefits removed by the Department of Work and Pensions.

By this point, I’d been forced to quit my job in finance after a year of sick leave, due to the overwhelming nature of my illness and the toll the working day had on my symptoms.

I had struggled to work full-time for many years but I’d had no other option. Often our self worth is wrapped up in our careers, so having to leave left me feeling like a failure, lost and a financial burden.

Sadly, instead of hearing my pleas, I was assessed as 100% fit to work at a time when I could barely function or care for myself. I needed these benefits to financially support myself, so I had to appeal, which took 18 months.

It was so stressful and exhausting – filling out forms, having to explain my situation over and over – it broke me. Thankfully, the decision was finally overturned.

I have been virtually bedbound now for eight years. Unfortunately, subsequent doctors haven’t been as supportive; many have just dismissed me.

I had one doctor tell me, ‘Your fatigue is caused by oversleeping’. I had another GP tell me, ‘If you don’t get out of that bed soon, you are going to die in it – sooner rather than later’. I sobbed for two days.

Don’t they know I would get out of it if I could? I want nothing more. Before I became sick I had a very active social life and a promising career. I miss my old life so much – I miss my friends, I miss having a purpose.

I am lucky to have very supportive family and friends. I have care workers come to assist me twice a day. It’s weird having strangers walk into your home, it took me a long while to adapt to that. I have always been so stubborn and independent so asking for help is challenging for me.

But I can’t stand or sit up long enough to prepare food for myself. Doing either for more than five minutes causes weakness, pain, palpitations and dizziness.

Everyday objects are too heavy for me to lift, like kettles, standard crockery and jars (I use plastic ones). I can’t even open the fridge.

I can only shower once a week because it is so exhausting and hurts, even then I have to do it quickly. The bathroom had to be converted into a wet room because I didn’t have the strength to get in and out of the bath.

My hair used to be very long; I had no alternative but to cut it off because I couldn’t manage washing and drying it myself.

When it brushed against my arms or neck, it would send a shooting sensation through my body – like thousands of tiny daggers stabbing me. I had hoped I would be able to just trim it shorter but I can’t sit up long enough to have it cut or styled, so I have it shaved off once a month using a pair of clippers.

I think most people who think of ME have a misunderstanding of what it’s like to live with; there is quite often the expectation that those of us suffering with chronic fatigue sleep all the time.

That couldn’t be further from the truth. Even though I’m exhausted, I struggle to sleep or even rest due to the pain, muscle spasms, dizziness and palpitations. I constantly feel agitated, in a state of unrest.

I can’t even distract myself by watching TV or listening to the radio as the sounds and lights feel abrasive.

It means that I am alone for long periods of time with nothing but my thoughts for company. Even when I do manage social interaction, it drains all my energy reserves. I pay for every activity I do.

Other times, the cognitive problems caused by ME – like confusion – mean I struggle to communicate.

It’s an incredibly lonely illness. I only leave my bed to go to the bathroom and when I leave the house, it’s to go to the hospital. I haven’t been outside in months.

ME has stolen so much from me, but the most frustrating part about this debilitating illness is not being believed and not having a voice.

Those of us with ME are not just ‘missing’, we are ‘forgotten’.

You can read more of Jo’s story on her blog, A Journey through the Fog. To find out more about ME and how to support education and research about it, visit www.meaction.org.uk