New Zealand has passed into law a unique plan to phase out tobacco smoking by imposing a lifetime ban on young people buying cigarettes.

The law states that tobacco can’t ever be sold to anybody born on or after January 1 2009.

It means the minimum age for buying cigarettes will keep going up and up. In theory, somebody trying to buy a pack of cigarettes 50 years from now would need ID to show they were at least 63 years old.

But health authorities hope smoking will fade away well before then. They have a stated goal of making New Zealand smoke-free by 2025. 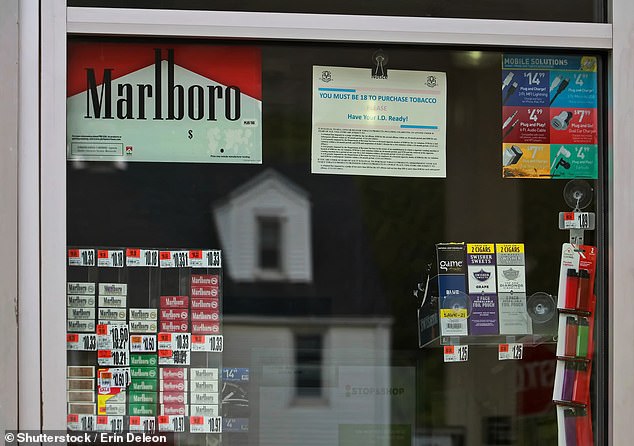 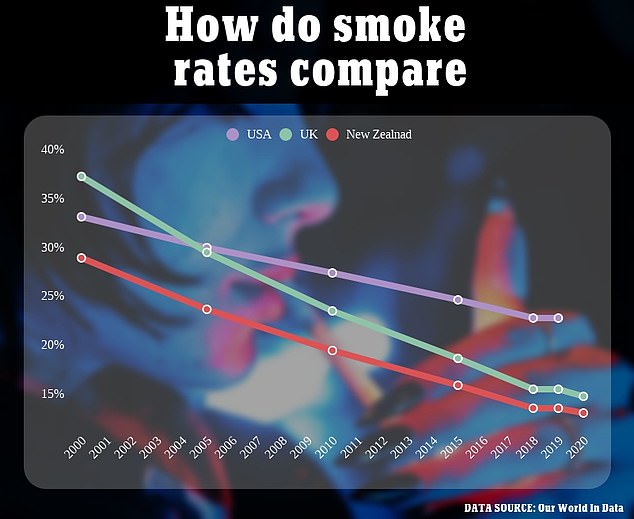 HOW DO SMOKING RATES COMPARE? According to the research platform OurWorldInData, fewer than 15 percent of New Zealanders smoked in 2020 compared to around a fifth of Americans 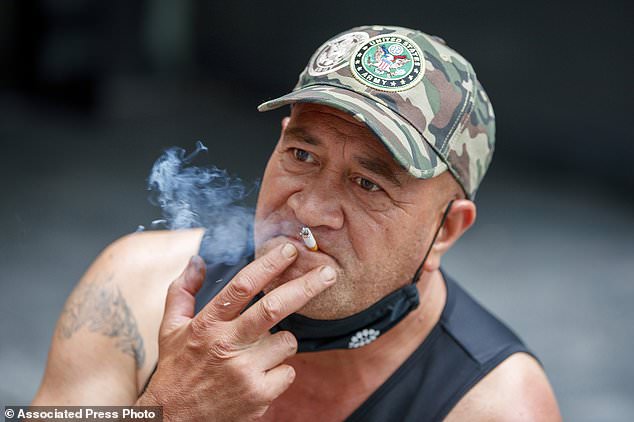 New Zealand has passed into law a unique plan to phase out tobacco smoking by imposing a lifetime ban on young people buying cigarettes. Pictured: A man smoking in Auckland, New Zealand on December 9 2021

How dangerous is smoking for the heart?

How does tobacco damage the heart?

Tobacco smoke contains more than 7,000 chemicals, including tar and others that can narrow arteries and damage blood vessels.

While nicotine – a highly addictive toxin found in tobacco – is heavily linked with dangerous increases in heart rate and blood pressure.

Smoking also unleashes poisonous gases such as carbon monoxide, which replaces oxygen in the blood – reducing the availability of oxygen for the heart.

How many people does smoking kill?

Smoking is known to kill more than seven million people across the world each year, including 890,000 from breathing in second-hand smoke.

But many people are unaware that nearly half of those deaths, around three million, are due to heart disease, including heart attacks and strokes.

The new law also reduces the number of retailers allowed to sell tobacco from around 6,000 to 600 and decreases the amount of nicotine allowed in tobacco that is smoked.

Dr Ayesha Verrall, New Zealand’s associate minister of health, said: ‘There is no good reason to allow a product to be sold that kills half the people that use it.

‘And I can tell you that we will end this in the future, as we pass this legislation.’

She said the health system would save billions of dollars from not needing to treat illnesses caused by smoking, such as cancer, heart attacks, strokes and amputations.

The bill would create generational change and leave a legacy of better health for youth, Dr Verrall said.

Lawmakers voted along party lines in passing the legislation 76 to 43.

The right-wing ACT party, which opposed the bill, said many small corner stores, known in New Zealand as dairies, would go out of business because they would no longer be able to sell cigarettes.

Brooke van Velden, ACT’s deputy leader, said: ‘We stand opposed to this bill because it’s a bad bill and its bad policy, its that straightforward and simple.

‘There won’t be better outcomes for New Zealanders.’

Ms van Velden said the gradual ban amounted to ‘nanny-state prohibition’ that would end up creating a large black market.

The law does not affect vaping, which has already become more popular than smoking in New Zealand.

Statistics New Zealand reported last month that 8 per cent of New Zealand adults smoked daily, down from 16 per cent a decade ago.

Meanwhile, 8.3 per cent of adults vaped daily, up from less than 1 per cent six years ago.

Smoking rates remain higher among Indigenous Maori, with around a fifth reporting that they smoked. 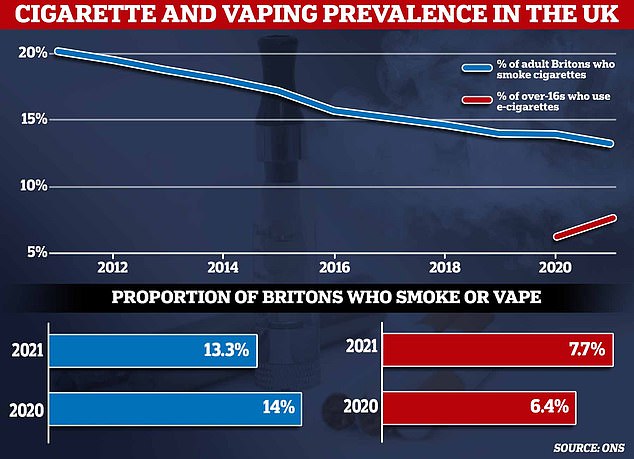 Just one in eight adults in Britain were frequent users in 2021, down by five per cent on last year, according to the Office for National Statistics’ Annual Population Survey (blue line). Meanwhile, 4million over-16s now use e-cigarettes — up by a fifth in just 12 months (red line) 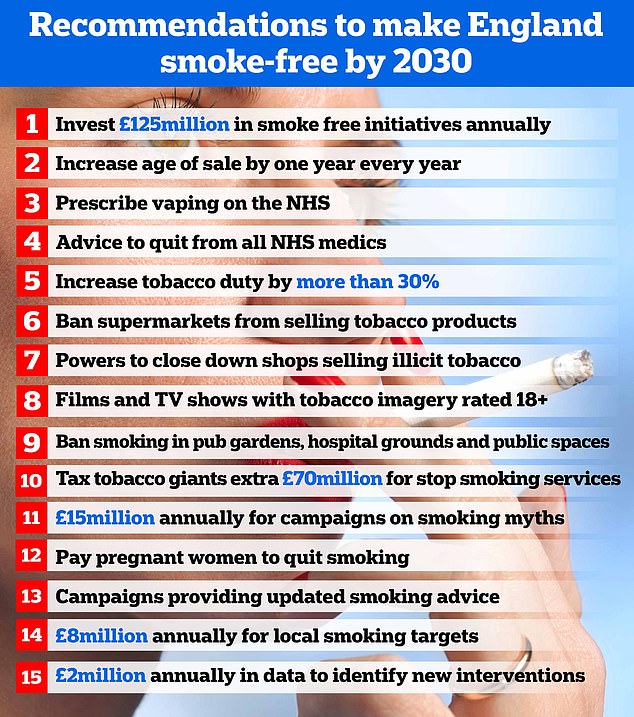 Javed Khan, a former children’s charity chief who was tasked with finding ways Britain could stick to its smoke-free target, warned in August that England is set to miss the target by at least seven years. He suggested hiking the age limit for purchasing cigarettes in England, currently set at 18, by 12 months every year until no-one can lgally buy a tobacco product

2007: England, Wales and Northern Ireland bring in indoor ban. In England, smoking is banned in almost all enclosed public spaces and the NHS goes smoke-free. Legal age to buy cigarettes raised from 16 to 18

2015: Smoking in cars with children banned in England and ban on the display of tobacco in small shops comes into force throughout the UK

2017: Government issues target to reduce smoking prevalence among adults to 12 per cent or less by 2022

2019: Department of Health publishes plans to make England smoke-free by 2030

2020: Menthol cigarettes are banned in the UK and EU

New Zealand already restricts cigarette sales to those aged 18 and over, requires tobacco packs to come with graphic health warnings and cigarettes to be sold in standardized packs.

The law change was welcomed by several health agencies.

Health Coalition Aotearoa said the new law represented the culmination of decades of hard-fought advocacy by health and community organizations.

Smoking is one of the biggest causes of illness and death, increasing the risk of developing a serious health condition 50-fold.

It is behind around seven in every 10 cases of lung cancer and can cause mouth, throat, and liver cancer.

The habit also damages the heart, raising the risk of heart disease, heart attacks and strokes, and the lungs, which can lead to chronic obstructive pulmonary disease (COPD) and pneumonia.

‘It will merely drive the sale of cigarettes underground with consumers buying unregulated cigarettes on the black market, like any other prohibited product.’

He added: ‘Absurd policies like this are what happens when governments set targets for countries to become smoke-free.

‘Denying adults the right to buy cigarettes legally will infantilise future generations and could make cigarettes more not less desirable.’

It comes after the bold proposal was also advocated in the UK.

He suggested hiking the age limit for purchasing cigarettes in England, currently set at 18, by 12 months every year until no-one can lgally buy a tobacco product.

It comes after figures show that cigarette smoking rates in the UK have fallen to their lowest level since records began over a decade ago.

Just one in eight adults in Britain smoked in 2021, down by five per cent on last year and a fraction of the nearly 50 per cent during the 1970s, according to the Office for National Statistics (ONS).

Meanwhile, 4million over-16s now regularly vape — up by a fifth in just 12 months.

Statisticians said the decline in cigarette smokers ‘may be partly attributed to the increase in vaping and e-cigarette use’.