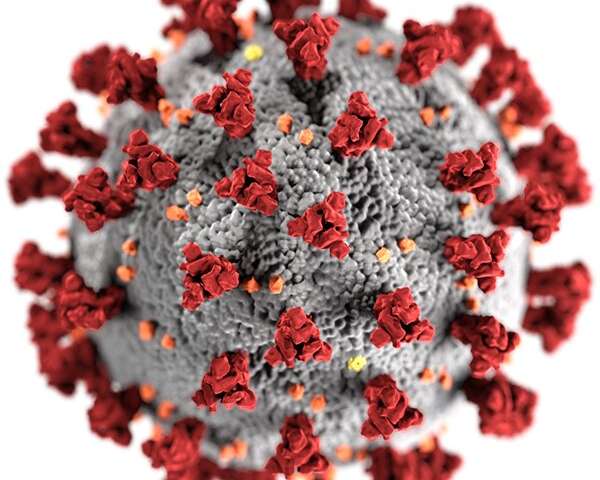 Researchers at the Francis Crick Institute have identified a variant of the SARS-CoV-2 cell receptor ACE2, which is driven by antiviral interferon signals. The virus is not able to bind to this variant, dispelling concerns that interferon-based treatments could be inadvertently helping it spread more quickly in the body.

In their study, published in Nature Genetics, the researchers examined the genetic information that codes for the ACE2 receptor, to which SARS-COV-2 must bind in order to enter and infect human cells.

They analyzed existing genetic databases and human cells to identify a new variant, or isoform, of ACE2 called MIRb-ACE2, which SARS-CoV-2 cannot bind to.

Kevin Ng, author and post-graduate student in the Retroviral Immunology Laboratory at the Crick says: “This variant of genetic information is the result of retroelements in our DNA, which can ‘jump’ around the genome impacting gene expression. From looking at which other species also have this variant, it appears to be widely present in mammals, so it must have entered the human genome a long time ago.”

To understand the role this variant plays in the body’s response to SARS-CoV-2, the team tested the effects of exposing cells to interferons, signaling proteins that are made and released by virus-infected cells. They found that interferons increase the response and production specifically of MIRb-ACE2, while ACE2 is not affected.

This allays concerns that interferon-based treatments for SARS-CoV-2 could inadvertently be helping the virus by bringing about an increase in coronavirus cell receptors in the body. SARS-CoV-2 is not able to bind to MIRb-ACE2, which is also highly unstable.

George Kassiotis, author and group leader of the Retroviral Immunology Laboratory at the Crick says: “The non-functional MIRb-ACE2 isoform was likely responsible for results from previous studies that suggested interferons could be upregulating ACE2, as there was no distinction between these two isoforms. This highlights how scientific knowledge about SARS-CoV-2 is constantly being revised and updated as new research is carried out. We still have a lot to learn, but we are making rapid progress.”

The findings mean that previous studies, which were not able to distinguish between these two variants, may need to be re-analyzed in order to determine which of the two isoforms is responsible for the results. For example, the gene that makes ACE2 is located on the X chromosome and it has previously been suggested that differences in ACE2 expression between men and women might underlie differences in COVID-19 outcome, which is more severe in men.

The researchers also found that cells in the upper aerodigestive tract, including the mouth and the nose, express more MIRb-ACE2 than the functional ACE2, and this balance changes lower in this tract and in the intestines. More research is needed to understand why this difference occurs and the impact it might have on how the virus spreads in the body.