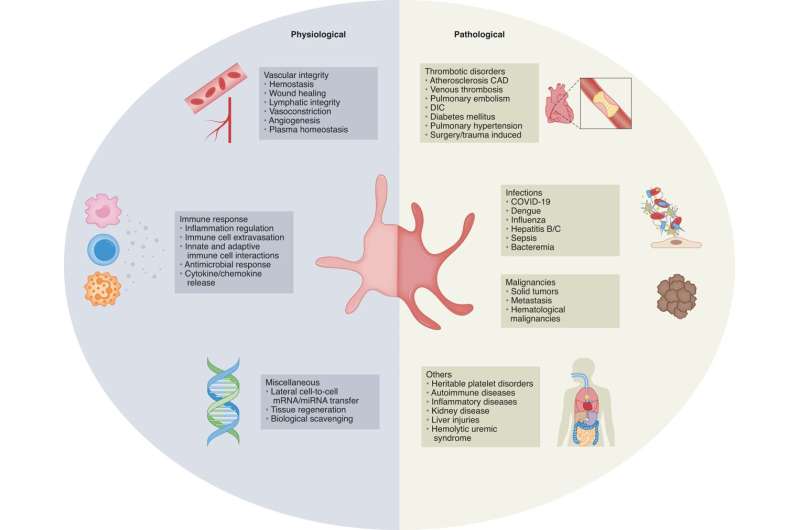 As a graduate student studying molecular cardiology at the Cleveland Clinic/Case Western Reserve University, John Hwa, MD, Ph.D., professor of medicine (cardiovascular medicine), found himself in an environment where many labs were studying platelets, but chose instead to study adrenergic receptors that regulate blood pressure. At the time, the significance of these small blood cells was poorly understood and seemed limited. “Platelets were thought to be important cells involved in blood clotting, but not much else,” says Hwa. He never thought, he says, that he would become as passionate about platelet research as he is today.

Now, the number of studies on platelets has been exploding over the past decade as researchers realize that platelets are involved in the regulation of many processes in the body. A physician-scientist, Hwa hopes to develop a bridge between the rapidly evolving science of platelets and clinical practice. He and his team encapsulated the work produced over the years in a review article in Nature Cardiovascular Research on March 3. Much has been learned. “The list of processes that platelets are known to be involved in is growing as a result of emerging studies and technologies,” Hwa says.

Platelets are small cells in the bloodstream—smaller than red or white blood cells—that lack a nucleus and only survive for seven to 10 days. Their recognized function is to form clots that prevent bleeding, but these clots can also cause heart attacks and strokes, so platelets have been a major target of drugs for cardioprevention.

These cells also play a role in other abnormal bleeding or clotting problems that Hwa often sees in patients, but why this occurs is still not well understood. Scientists traditionally believed platelets to be a homogeneous group of cells, but the growing science is revealing them to be much more diverse than previously thought. This knowledge is due to the rise in single-cell analysis technologies that are unveiling the uniqueness of individual cells and their range of roles. Through learning more about the different subsets, Hwa hopes to establish a “platelet atlas,” which he believes will provide major insights on improving existing therapies and developing new ones.

“The heart is a single organ composed of many different cells with various roles in physiology and pathology, ” he says. “It’s the same with the bloodstream.”

Research spurs a revolution in medicine

Exciting new single cell analyses allow researchers to gain a massive amount of data about individual cells, such as the genes, proteins, fatty acids, or lipids present. This rising technology is allowing researchers to better understand characteristics of healthy and diseased platelets, and the various subtypes of those cells. The recent science has revealed that even though platelets don’t have a nucleus, they serve many functions for which researchers originally thought cells needed nuclei, such as fixing blood vessel walls and regulating inflammation.

Hwa hopes this new knowledge will help physicians tailor more effective treatments for patients. Existing therapies may be targeting the wrong subset of platelets, for example, or missing the ones that cause disease.

“This is one of the next revolutions in medicine,” he says. “Clinical tests are good at informing that there is abnormal bleeding or clotting, but why has it happened? Basic science can provide clues into new therapeutic targets.”

Platelet research can also benefit patients with COVID-19. Studies have shown that the virus leads to abnormal platelets in individuals it affects. This has led a number of institutions, including Yale, to prescribe COVID-19 patients low-dose aspirin, a treatment used to prevent heart attacks and strokes by making platelets less sticky.

The Hwa lab is currently studying novel roles of platelets in cancer, diabetes, and aging. Targeting platelets, he says, could help fight against cancer growth and spread. His lab has found that platelets play an important role in diabetes, and through his research he hopes to further elucidate the mechanisms. Furthermore, his lab would like to better understand how the aging process can change platelets, leaving older individuals more vulnerable to heart attacks and strokes. His team is also venturing into studying platelets in children and looking at their role in pediatric disease.