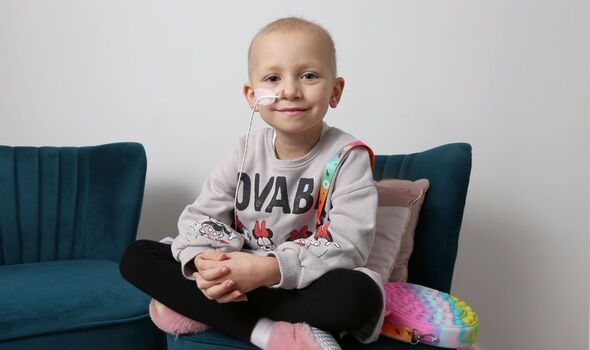 Scientists are racing to end the heartache of families devastated by high-risk neuroblastoma which kills half those diagnosed.

The Daily Express today calls for Britain to fund vital research that could help more youngsters fight off the horrific disease.

Beau’s mum, Shirley Hepworth, said: “This could happen to anyone. You cannot do anything to 100 per cent prevent cancer and it doesn’t discriminate.

“Of course I want my daughter to have the best chance at life but this isn’t just about Beau. This campaign is about protecting future children.”

Together with charity Solving Kids’ Cancer UK (SKC), we are calling on the Government to Back Britain to Beat Childhood Cancer.

An estimated £10-15 million is needed for the UK to lead the European side of a transatlantic clinical trial of the vaccine.

Around 50 children a year are diagnosed with high-risk neuroblastoma in the UK and endure one of the most gruelling treatment regimes for any cancer.

They have only a 50/50 chance of survival, and one in five of those whose first round of treatment is successful later suffers a devastating relapse.

“It was in her bone marrow, throughout her skeletal system and she had a soft tissue tumour around her kidney.”

Beau started chemotherapy in early 2021 and had a 13-hour surgery. Growing around her organs and spine, the tumour was roughly the size of a rugby ball when removed.

During months in hospital she had stem cells harvested, then later returned to her body, and underwent further chemo and radiotherapy.

The effects were at times so debilitating that she could not speak and developed her own sign language.

When Beau went into remission in autumn 2021, Shirley had a decision to make.

An experimental vaccine has been developed which aims to slash the risk of the cancer returning by training the immune system to recognise and attack neuroblastoma cells.

However, it was only available through a study at Memorial Sloan Kettering Cancer Center (MSK) in New York.

British families are spending hundreds of thousands of pounds to travel there, creating more traumatic upheaval in their lives and a huge financial burden.

Shirley felt torn over whether to put her daughter through the stress of multiple 3,000 mile treks to the US clinic.

She said: “Once in remission, Beau could just get back on with her life. It’s a really difficult decision to make and I know people who have decided not to do it.

“But I thought that if a year down the line she relapsed, I would never forgive myself for not doing this last little thing.”

Shirley launched an appeal on Christmas Eve 2021 to raise £317,000 – the estimated sum needed to cover several journeys to MSK.

She was astonished by the generous response of her community in Batley and Spen, West Yorkshire, and has raised £690,000. Leftover cash will go to other families or research.

Shirley’s MP, Kim Leadbeater, said she was reminded of the outpouring of support when her sister, Jo Cox MP, was murdered in 2016.

Kim, who is backing our campaign, said: “It took on a life of its own. I knew how powerful the local community had been after Jo was murdered.

“To see that develop with Beau and Shirley was incredibly inspirational and heartwarming. We were seeing the best of humanity.”

Beau was due to travel to MSK last April but in a cruel twist of fate she relapsed 10 days before finishing immunotherapy – the last stage of frontline treatment.

Shirley said this was why she never told her daughter that her treatment is over, or held a party to celebrate her being “cured”.

She added: “Beau is a living example of how the odds are stacked against these children.”

The youngster is now on an NHS trial which combines radiotherapy with antibody infusions. If the treatment is successful, the pair hope to go to New York before the summer.

Beau and Shirley will follow in the footsteps of at least 33 British families who have flown to join the US trial since 2016.

Although grateful for the opportunity to access the vaccine at MSK, they would suffer far less stress and disruption if they could get it here.

The Express is inviting Health Secretary Steve Barclay to meet with families including Beau and Shirley to understand how they could benefit.

However, more data is needed to conclusively prove whether it is effective and, if so, get it licensed and approved for NHS use.

Top neuroblastoma experts on both sides of the Atlantic are willing to work together to gather the wealth of data required.

Taking a leading role in the research would demonstrate this country’s strength as a science superpower.

It would also create a blueprint for further collaborative research into children’s cancers and rare diseases.

British patients would be among the first to access the jab if the UK helped establish a trial. And it would ensure our experts can collect the robust data required by regulators and the medicines watchdog.

Emily Hall, SKC’s research engagement and advocacy manager, said: “No family should feel they have run out of options as they try to do everything possible to save their child’s life.

“But this will remain the reality for too many until the UK government commits to dedicating investment to clinical research in children’s cancers, starting with this important trial.”

• To find out more about Beau’s journey, search for ‘Beau’s Fight Against Cancer’ on Facebook