A mother-of-two has revealed how her 11-month-old baby girl’s strange cough was a sign of deadly sepsis.

Louise Wood, 39, of Merseyside, called NHS 111 for advice about her daughter Clara’s bizarre breathing on February 3.

She hadn’t been too concerned about her long naps in the days before, considering Clara was recovering from a cold.

After answering a series of questions on the phone, Mrs Wood began to panic when the phone operator said paramedics were rushing to the house.

Within minutes, the youngster was taken to hospital where she was diagnosed with pneumonia and sepsis.

Mrs Wood and her husband, David, 39, waited in agony for a week as their youngest child battled against pneumonia and sepsis. 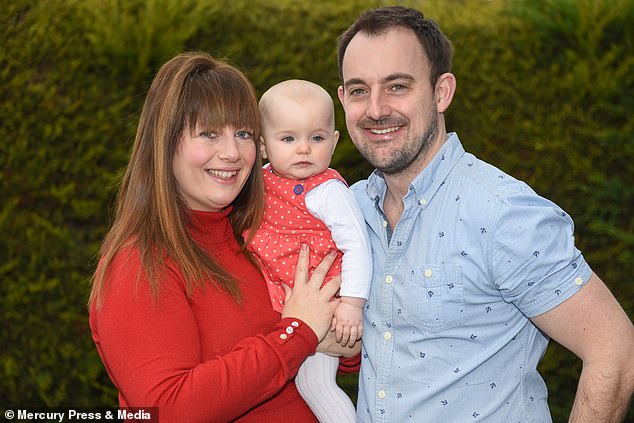 Louise Wood, of West Kirby, Merseyside, called NHS 111 for advice about her daughter Clara’s bizarre breathing on February 3. Pictured with her husband, David 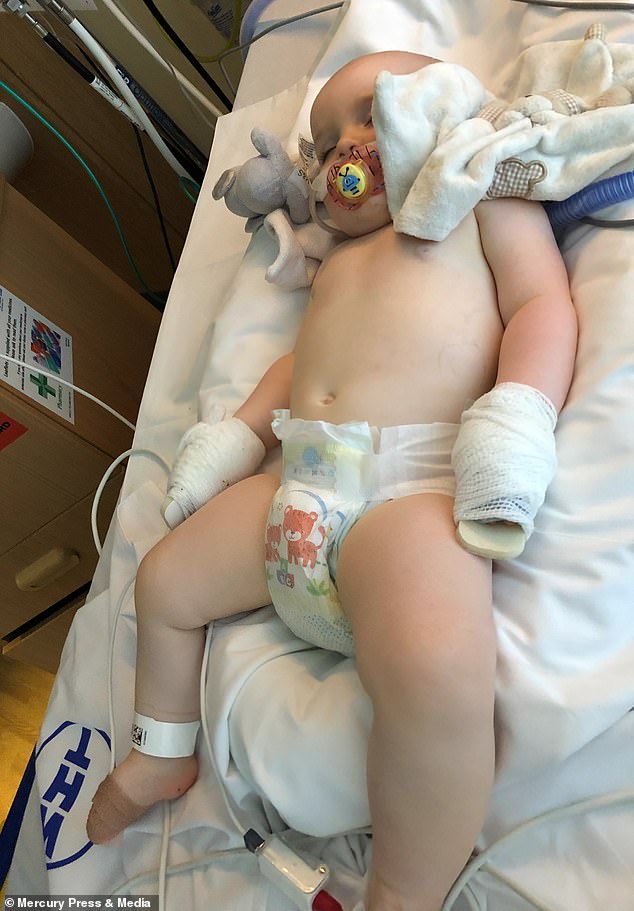 Now, after a full recovery, Clara has been christened and her parents are raising awareness of the symptoms of sepsis and pneumonia.

Communications manager Mrs Woods recalled: ‘Her eyes were half open and she was making this weird coughing sound the paramedics later described as a “grunting” noise.

‘She had been napping for a really long time and she had been quiet and subdued the day before but I had just put it all down to a bit of a cold that she had.

‘I was in complete shock. You go from being at home one Sunday morning and next you find yourself in A&E.’

Mrs Woods was shocked when Clara was taken to nearby Arrowe Park Hospital in Birkenhead within minutes of calling NHS 111.

She said: ‘On the phone they asked me a series of questions and then they said, “not to alarm you but we are going to send an ambulance”.

‘I was alarmed but equally thought “thank God I called”. They arrived within about three minutes, which made me even more concerned in a way. 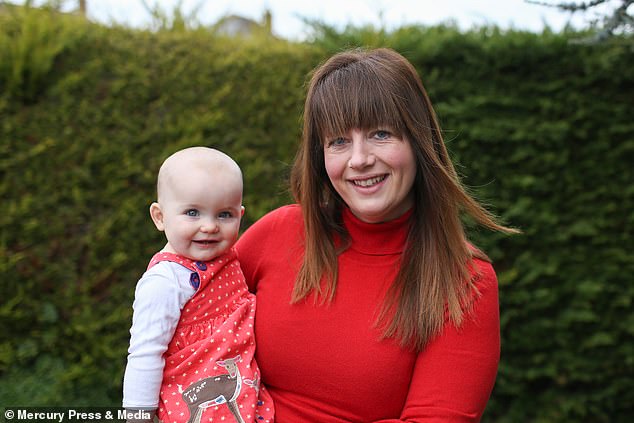 Mrs Woods, a communications manager, believed Clara’s breathing and long naps were due to a cold. She rang the NHS 111 service just incase 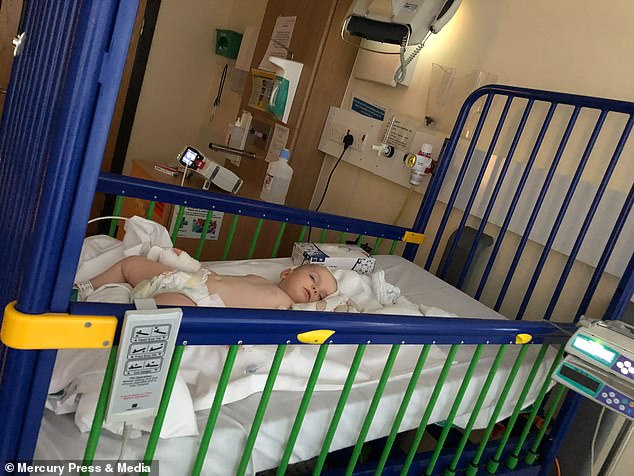 After answering a series of questions on the phone, Mrs Wood began to panic when the phone operator said paramedics were rushing to the scene. Pictured, in hospital 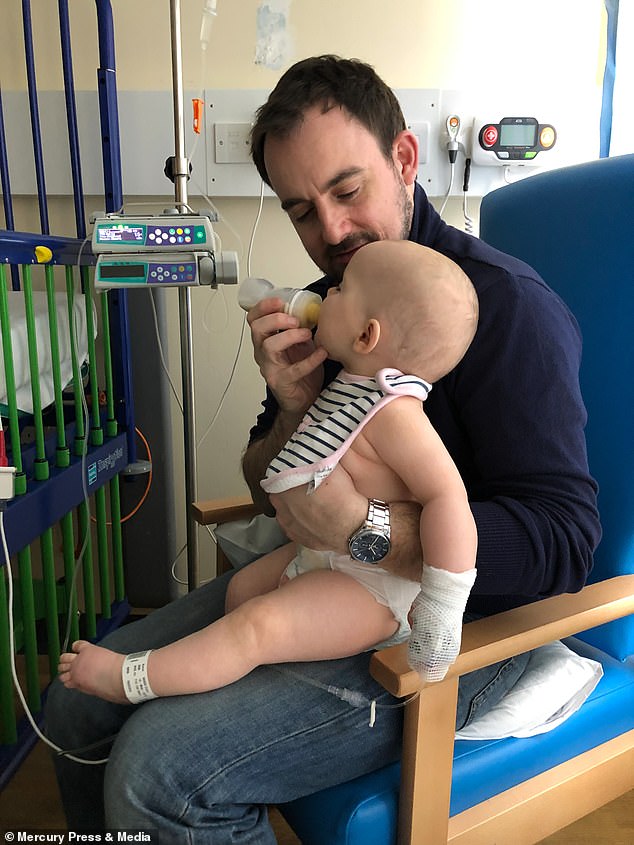 A team of was waiting for the baby when she arrived at A&E, Mrs Woods said. Pictured, with her father in hospital

WHAT ARE THE SIGNS OF PNEUMONIA?

The symptoms vary depending on the age of the child and also the precise cause of the infection.

In general, the key symptoms for children are a temperature over 38.5°C and rapid breathing, or difficulty in breathing.

Other common symptoms include:

‘When we got to A&E there was a team of doctors waiting for her and we went straight to resus.

‘They put cannulas in to give her fluids, and Clara was put on oxygen because her saturation levels were so low.’

A head consultant arrived around five minutes later and confirmed it was pneumonia and sepsis, which was when the parents really started to panic.

Mrs Woods said: ‘That’s when the head consultant had some pretty frank words with us about her condition because babies’ conditions with these things can change very rapidly.

‘We had to wait to see if the treatment they were giving her was going to work.’

Luckily, Clara managed to make a full recovery within a week to the relief of her parents and her big sister Evelyn, four.

Despite vaccinations being available, there are still around 700 reported cases of pneumonia in the under-fives in the UK every year.

The disease claims the lives of around 40 children in England and Wales each year, and around 880,000 children in the US.

At least 46,000 people die every year in the UK as a result of sepsis, which is when the body reacts to an infection by attacking its own organs and tissues. 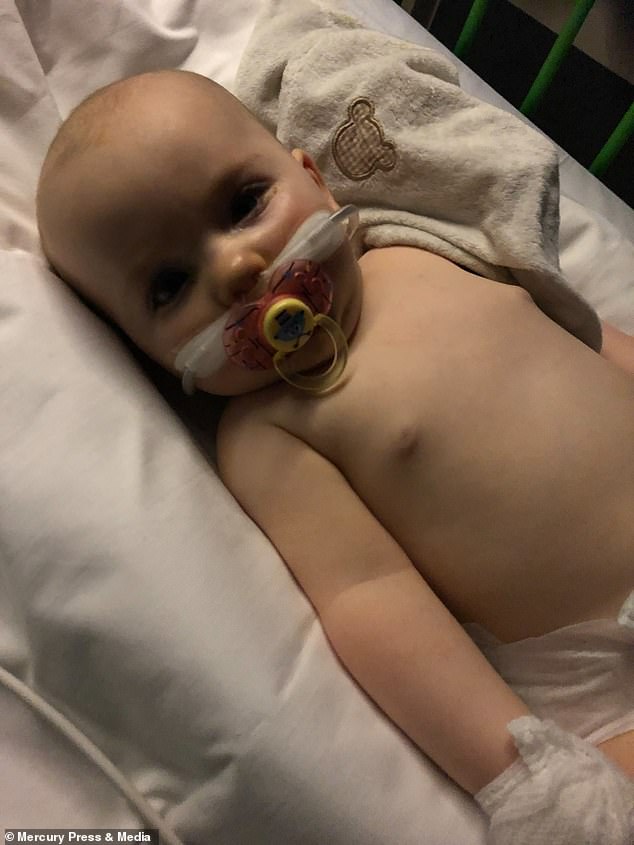 Clara was put on oxygen straight away and given cannulas for fluids. A head doctor later confirmed that Clara had pneumonia and sepsis and her condition could rapidly decline 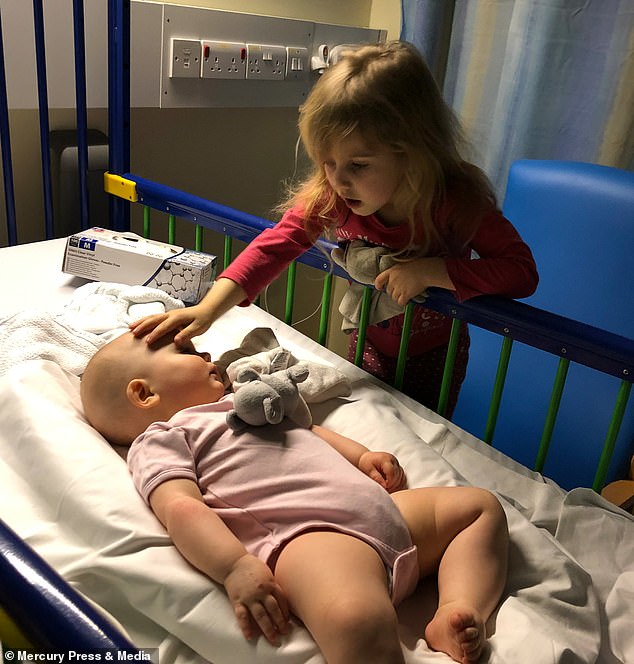 The family, including older sister Evelyn, four, waited in agony while Clara recovered in hospital for a week 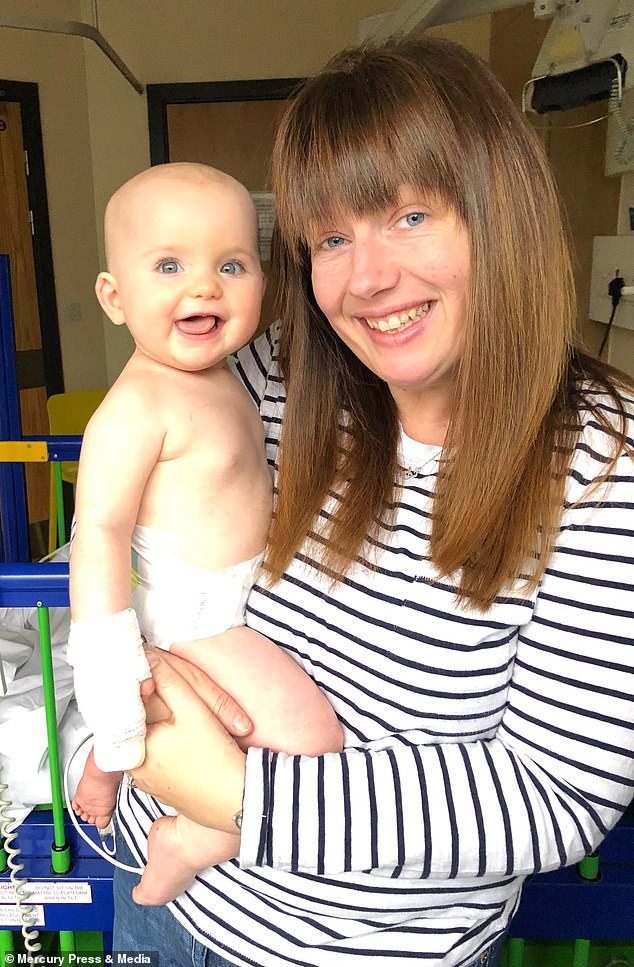 Mrs Woods, pictured with Clara in hospital during her recovery, said: ‘I was alarmed but equally thought “thank God I called”‘

Mrs Woods said: ‘It was only the week afterwards that I had a major cry about it all and it properly hit me that it could have been a very different story.

‘No-one wants to hear a doctor tell you “it’s a good job you called when you did” because you realise then how serious it can be, but it just goes to show how important it is to call and ask for advice.’

By the following Sunday, the family were celebrating their Clara’s christening and how far she had come since her near death experience.

Since Clara’s life-saving treatment, Mrs Woods has written to the chief executive of Arrowe Park Hospital in Birkenhead and even met up with the staff that saved her daughter’s life. 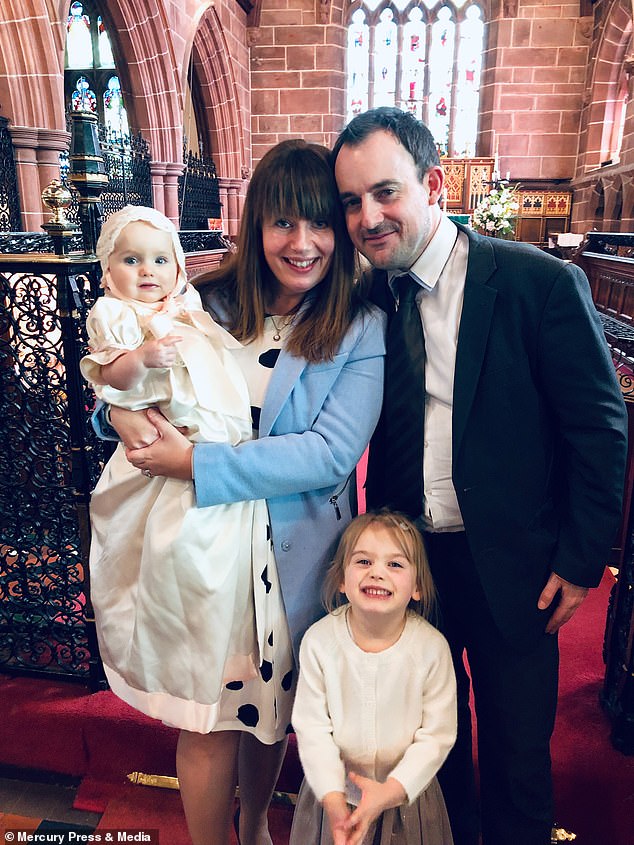 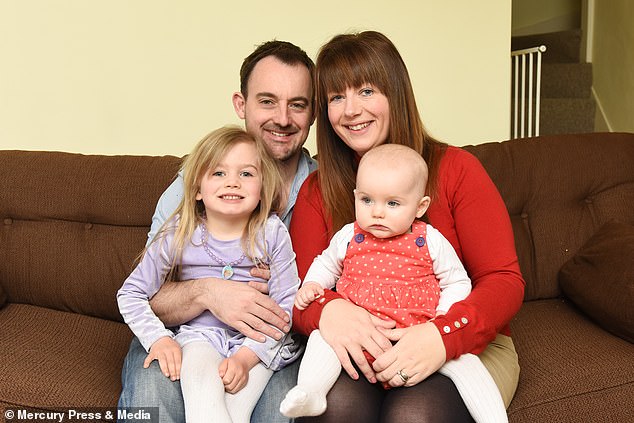 Mrs Woods, pictured at home with her family, said: ‘No-one wants to hear a doctor tell you “it’s a good job you called when you did” because you realise then how serious it can be’

She said: ‘Clara’s christening service was quite emotional because I had told our vicar about what was happening while we were in hospital.

‘He told us that they had all been praying for us which was really lovely and reassuring to know.

‘When I met the nurses and doctors who saved Clara it was amazing but it was very emotional.

‘I wanted it to be more than just a letter of thanks or some flowers and I think it meant a lot to them to see the happy ending to the story because for them I suppose they are just doing their jobs, but they have done so much more than that for us.’

Sepsis occurs when the body reacts to an infection by attacking its own organs and tissues.

Some 44,000 people die from sepsis every year in the UK. Worldwide, someone dies from the condition every 3.5 seconds.

Sepsis has similar symptoms to flu, gastroenteritis and a chest infection.

Symptoms in children are:

Under fives may be vomiting repeatedly, not feeding or not urinating for 12 hours.

Anyone can develop sepsis but it is most common in people who have recently had surgery, have a urinary catheter or have stayed in hospital for a long time.

Other at-risk people include those with weak immune systems, chemotherapy patients, pregnant women, the elderly and the very young.

Treatment varies depending on the site of the infection but involves antibiotics, IV fluids and oxygen, if necessary.