A mobile phone app can detect if a hospital patient has a potentially fatal kidney condition in an average of 14 minutes.

Alerts are sent straight to doctors and nurses through the technology, developed by Google’s DeepMind.

The app, called Streams, looks for signs of acute kidney injury, which kills around 100,000 people in the UK each year.

AKI involves sudden damage or decreased blood flow to the kidneys, normally the result of another illness. It is not an injury to the kidney.

Streams looks for signs a patient’s kidney functioning is worsening, which doctors say could save thousands of lives.

Without rapid treatment, patients can die, end up on dialysis or need a transplant, according to researchers at London’s Royal Free Hospital.

Experts believe up to one in three deaths from AKI may be preventable if doctors are able to intervene earlier. 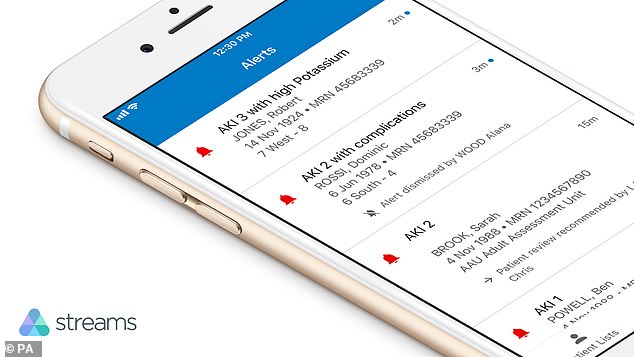 The Streams app has been tested at the Royal Free Hospital, and has led to AKI cases being detected in 14 minutes or less

Figures suggest around one in five hospital patients fall ill with acute kidney injury (AKI), often due to dehydration.

The condition costs the NHS £1.2billion annually. But the Streams app has potential to save a lot of money.

Streams cut the costs by around £2,000 per hospital patient with AKI – from £11,772 to £9,761, according to results published in the journal Nature Digital Medicine.

A trial of the app found it detected 96.7 per cent of cases considered an emergency – compared to the 87.6 per cent for current methods.

It works by collecting data, such as heart rate, blood pressure, and blood tests, from IT systems already in the hospital.

The data, alongside patient’s previous diagnoses, is stored in one place, allowing clinicians to easily read through results.

Streams can send an urgent alert to the right clinician to help, reducing the time staff would normally spend contacting each other.

For example, Streams would alert staff if a blood test recorded high levels of a waste product called creatinine, which is normally filtered out by the kidneys.

Data from around 12,000 alerts on AKI using Streams was evaluated by the experts, which involved a team from University College London.

The findings found a ‘significant improvement’ in recognising acute kidney injury rapidly. But there was no change in recovery time.

He said: ‘Digital technology is the way forward for the NHS.

‘In the same way as we can receive transport and weather alerts on our mobile devices, doctors and nurses should benefit from tools which put potentially life-saving information directly into their hands.

‘In the coming months, we will be introducing the app to clinicians at Barnet Hospital as well as exploring the potential to develop solutions for other life-threatening conditions, like sepsis.’ 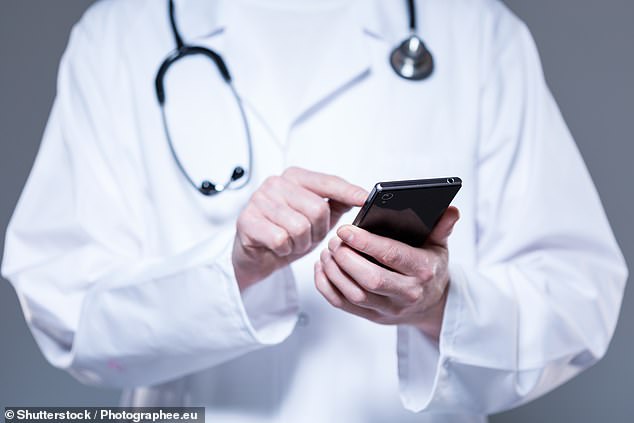 DeepMind has also been trialling an artificial intelligence system to predict AKI.

In studies, the AI system successfully detected AKI two days early by analysing up to 600,000 data points – such as blood tests, heart rate and blood pressure.

The health and technology company’s algorithm was tested on records of more than 700,000 patients from the US Department of Veterans Affairs – the largest integrated healthcare system in the US.

It was able to detect 55.8 per cent of all inpatient episodes of AKI, according to findings published in Nature.

More than 90 per cent of all acute kidney injuries that required subsequent administration of dialysis were detected.

DeepMind are hoping to pilot the technology in UK hospitals within the next 12-18 months.

WHAT IS ACUTE KIDNEY INJURY?

Acute kidney injury (AKI) is where your kidneys suddenly stop working properly. It can range from minor loss of kidney function to complete kidney failure.

AKI normally happens as a complication of another serious illness. It’s not the result of a physical blow to the kidneys, as the name might suggest.

This type of kidney damage is usually seen in older people who are unwell with other conditions and the kidneys are also affected.

It’s essential that AKI is detected early and treated promptly.

Without quick treatment, abnormal levels of salts and chemicals can build up in the body, which affects the ability of other organs to work properly.

If the kidneys shut down completely, this may require temporary support from a dialysis machine, or lead to death.

Symptoms of AKI include feeling sick or being sick, diarrhoea, dehydration, urinating more than usual, confusion and drowsiness.

Most cases of AKI are caused by reduced blood flow to the kidneys, usually in someone who’s already unwell with another health condition.

This can be caused by dehydration, medication, liver failure or sepsis.

The researchers believe it could be extended to help detect other deadly conditions, including sepsis.

Life-threatening sepsis is difficult to spot, and progresses rapidly. It was responsible for more than 350,344 hospital admissions in 2017/18.

Dr Dom King, the health lead for DeepMind Health, said: ‘This progress represents potentially a very significant change in how medicine is practised and care is delivered.

‘A lot of care at the moment is very reactive and this represents the potential to re-move the needle to proactive, preventative care. And that requires a lot of careful thought.’

Dr King, previously a general surgeon, said the AI was able to look at thousands of signs of deterioration, but a nurse or doctor can only look at one or two.

He said: ‘The current alerts are very simple and rules-based and don’t really pick up the subtlety of those patients at the earlier signs of deterioration, so it [the AI] really is mindblowing for me as a doctor.’

Paul Leeson, professor of cardiovascular medicine, University of Oxford, said: ‘Trials are still needed to test whether this early warning is useful to doctors to improve patient care, without causing too many false alarms, or missing patients that the AI also overlooked.

‘However, this is another strong example of how AI appears to have the potential to augment delivery of healthcare.’

DeepMind’s technology has previously raised concerns about the privacy of NHS patients’ data.

Based in London, it shares operations with the US-based Google Health unit, but Google states that patient data remains under DeepMind’s control and the move to Google does not affect anything.

An earlier deal between DeepMind and the Royal Free NHS Foundation Trust was found in 2017 to misuse patient data.

When sharing information with DeepMind for work on Streams, The Royal Free did not comply with the Data Protection Act when it passed on personal information of around 1.6million patients, the Information Commissioner’s Office (ICO) found.