For spoken languages, there are many resources that contain information about how often words are used, which words rhyme and other information not found in a dictionary. But until recently, there was no such thing for sign languages.

We are four researchers who study psycholinguistics, linguistics, neuroscience and deaf education. Our team of deaf and hearing scientists worked with a group of software engineers to create the ASL-LEX database that anyone can use for free. We cataloged information on nearly 3,000 signs and built a visual, searchable and interactive database that allows scientists and linguists to work with ASL in entirely new ways.

To communicate in any language, people must search their mental lexicon—the words or signs that they use and recognize—to perceive or produce the right vocabulary item. How quickly and efficiently they do this depends on how their lexicon is organized in their mind. The database our team built is meant to represent a mental lexicon and is allowing us to examine how signs are organized in the human mind.

For example, if you looked up “tease” in the database, you would learn that this sign is used quite frequently in ASL. A person trying to sign “tease” might think of it more quickly than a rare sign like “linguistics.” ASL-LEX also shows that “tease” is visually similar to—and, in a visual way, rhymes with—other signs, like “ruin.” These related signs might also come to mind while a person thinks of “tease.” Researchers believe this process of calling up similar words or signs helps people speak or sign faster.

Our goals were to first catalog the information that people might use to organize their mental lexicons and then to illustrate that information visually using a network map.

When we began building the database, we focused on the most common ways that people might mentally organize their vocabulary: how frequently signs are used, how much a sign visually resembles its meaning—a concept called iconicity—and how visually similar a sign is to other signs in the lexicon. There isn’t a conventional writing system for signed languages, so our team had to come up with novel methods to obtain information about the form of ASL signs.

In spoken languages, words that are used more frequently tend to be learned earlier and are processed faster than infrequent words. For spoken languages, word frequency is calculated by counting words in large collections of speech—some of the biggest collections come from movies with closed captions—but there aren’t collections like this for ASL. Instead, we asked 129 deaf signers from all over the U.S. to rate signs on a 7-point scale based on how often they appear in ASL signing. The higher the value, the more frequently used the sign is. 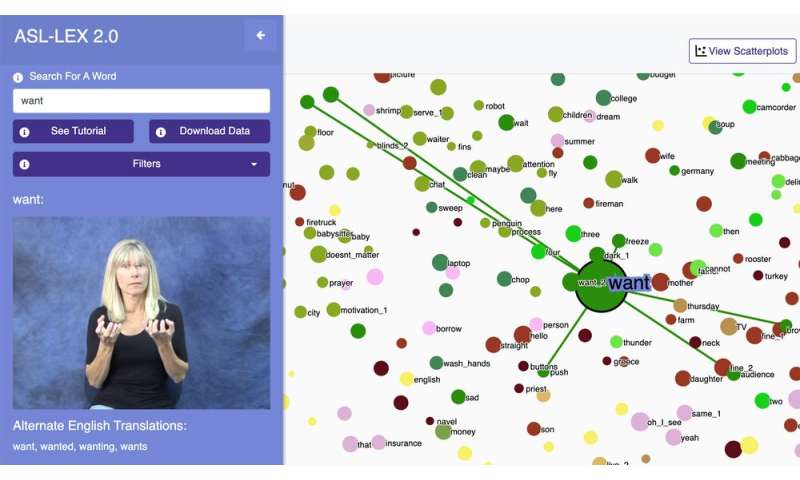 Another interesting aspect of sign language is that many signs visually resemble what they mean. For example, “drink” is highly iconic because it looks like the act of drinking. But “brother” is not iconic because it doesn’t look like an actual brother. Iconicity plays a key role in how signs are learned and organized in a person’s lexicon. To measure the iconicity of signs, we asked deaf and hearing people to judge how much a sign looks like what it means on a 7-point scale. The higher the value, the more iconic the sign is.

We also looked at how signs are formed—the handshape, location and movement of the body that make up a sign. Our team meticulously analyzed signs for many different properties including which fingers are involved, how bent they are, where the hands are located and other information. Organizing the map by handshapes, locations and movements illustrates how signs are visually related to one another and represents how researchers think signers might mentally organize their vocabularies.

Patterns emerge in the lexicon

Once we built the database, we immediately saw interesting patterns in the ASL lexicon. For example, frequently used signs tend to be simpler and shorter than rare signs—a pattern that holds for both spoken and signed languages. “Mother” is an example of a common and simple sign, while “kangaroo” is considered to be rare and quite complex. We found that signs used in everyday conversation become simpler over time to allow for more efficient communication, just like spoken words.

We also found that common signs are more likely to be in clusters of visually similar words, while rare signs are more isolated. For example, the sign “you” is relatively common and is visually similar to many other signs. But “vampire” is a rare and isolated sign. Interestingly, frequently used signs also tend to be less iconic. Iconicity seems to help communities coin new signs, but our results suggest that as signs are used more frequently, they change form and lose the visual resemblance to their meaning. 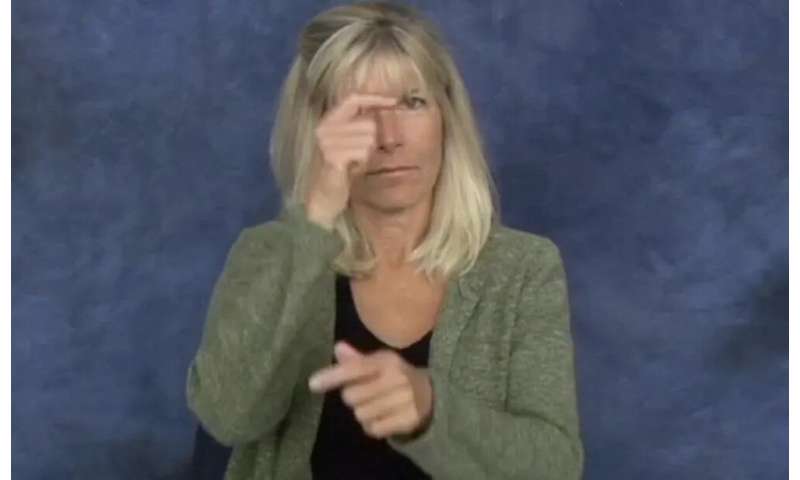 A resource for research and learning

Our initial exploration of ASL-LEX was fascinating, and once the database went live, other researchers began to use it. Some are studying how signs are learned or processed in the brain. Others are now using the database to develop automatic sign recognition technologies—like Alexa or Siri—for ASL.

Research is only one aspect of ASL-LEX. Another purpose is to help teachers and parents of deaf children teach ASL more constructively. Children learn their first language from the people around them. But deaf children aren’t typically surrounded by people who know ASL, and this can delay their language development. We hope that parents and teachers will use our freely available ASL-LEX database to identify and teach the most common and helpful signs first.