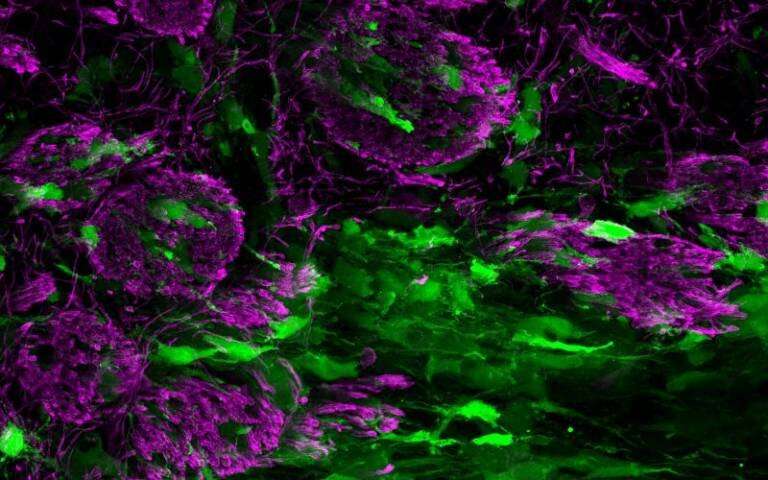 Scientists at the UCL have made a ‘surprising’ discovery that glioblastoma, an aggressive brain cancer, mimics normal brain repair in white matter, which leads to the tumor becoming less malignant.

In the study on mice, funded by Cancer Research UK and published in Nature Communications, researchers used these novel findings to identify drugs which could be used, or repurposed, to harness this response (feature) and treat the cancer.

Explaining the research, lead author, Professor Simona Parrinello (UCL Cancer Institute), said: “We know glioblastoma often develops and spreads in the brain’s white matter but it has been unclear why this happens or what molecules are involved in this process.

“In this experimental study, we wanted to understand what impact white matter has on cancerous tumor cells.”

Glioblastomas are the most aggressive type of cancer that begins within the brain. One of the main reasons that glioblastomas are so difficult to treat is that they spread into different regions of the brain. Approximately half the brain is gray matter, made up of cell bodies including neurons, the other half, referred to as white matter is composed of neuronal projections which are insulated by fatty membranes and therefore appear white. Tumor cells use the white matter as a route to spread to other brain regions.

In this study, the research team discovered that tumor cells, mimic brain repair, in that they attempt to repair the damage that the growing tumor mass causes to the brain’s white matter.

Professor Parrinello, who is Group Leader at the Samantha Dickson Brain Cancer Unit, part of UCL Cancer Institute, explained: “To our surprise, when the tumor cells spread into the brain’s white matter, it made the glioblastoma less aggressive.

“This response is caused by the growing tumor injuring the white matter and in turn responding to this wound-like environment by attempting to repair it.

“This causes the tumor cells to mature into cells that resemble the normal brain cells that make up the white matter.

“In this mature state, tumor cells become less able to grow and spread.”

The team found that this tumor response can be exploited for glioblastoma treatment using drugs that promote normal white matter repair, such as Pranlukast.

Professor Parrinello added: “Glioblastoma is the most common and aggressive type of primary brain tumor. There are currently no effective treatments for glioblastoma, so recurrence is inevitable. As a result, prognosis for glioblastoma patients remains extremely poor with a median survival of less than 18 months. Here we identified a potential new approach to treat glioblastoma and show that a drug currently in clinical use for asthma suppresses glioblastoma growth and spread in preclinical models.”

Around 2,200 people in the UK (mostly adults) are diagnosed with glioblastoma each year and currently prognosis is extremely poor with average survival rate of around six to 18 months.