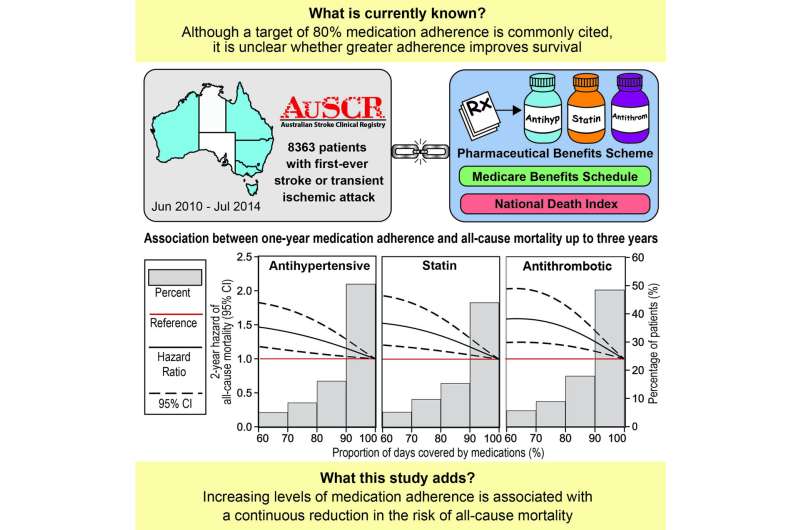 A recent study by researchers from Monash University emphasizes how critical it is for survivors of first-time stroke or transient ischemic attack (TIA) to take medications on an ongoing basis, with this new data highlighting long-term links with survival.

In Australia, someone suffers a stroke every 19 minutes and it is one of Australia’s biggest killers. In addition, nearly half of all survivors of stroke are expected to experience a recurrent cardiovascular event within 10 years. Specific medications help to prevent this long-term risk, but adherence to these agents is often suboptimal among patients.

The cohort included 8,363 adult patients who survived a first stroke or TIA between July 2010 and June 2014, with follow-up for a further three years. For patients with one-year adherence above 60 percent, each 10 percent improvement in adherence was associated with a 13–15 percent reduction in the risk of mortality. This new evidence suggests that an arbitrary adherence target of 80 percent may be inappropriate as maximal survival benefits were observed closer to 100 percent adherence.

A major strength of the study was the use of a statistical technique called restricted cubic spline models that enabled researchers to examine changes in the risk of mortality across the continuum of medication adherence. This technique provided more precise estimates on the relationship between medication adherence and mortality post-stroke than earlier studies.

The study’s lead author and head of the National Stroke Data Linkage program at Monash University, Associate Professor Monique Kilkenny, says there are several factors associated with a greater chance of continued use of secondary prevention medications: provision of medication on hospital discharge, regular contact with a primary care physician, and specialist physician contact.

“These findings represent important implications for practice by highlighting the value of efforts to improve medication adherence post-stroke/TIA, even among patients with near-perfect adherence,” Associate Professor Kilkenny said.