Loaded baked potatoes are one of those rare dinners that are just as exciting as an adult as they were when you were a kid. There’s something about the DIY aspect of loading a freshly baked potato with whatever toppings you like in exactly the amount you want. Plus, they’re inexpensive and pretty easy — two things that you likely appreciate a whole lot more at this point in life.

But loading a potato with bacon, cheese and a whole tub of sour cream isn’t the healthiest dinner choice despite it being absolutely delicious. There’s nothing wrong with doing it on occasion, but if you want the loaded baked potato bar to become a regular household dinner, it’s a good idea to get a little more creative and branch out into tasty toppings that are a little more nutritious.

The following 13 healthy baked potato recipes range from slight riffs on the classic to new ideas that’ll inspire you to shake things up. Whether you’re a die-hard bacon lover or a vegan, you’ll be craving a loaded tater by the end of the list. 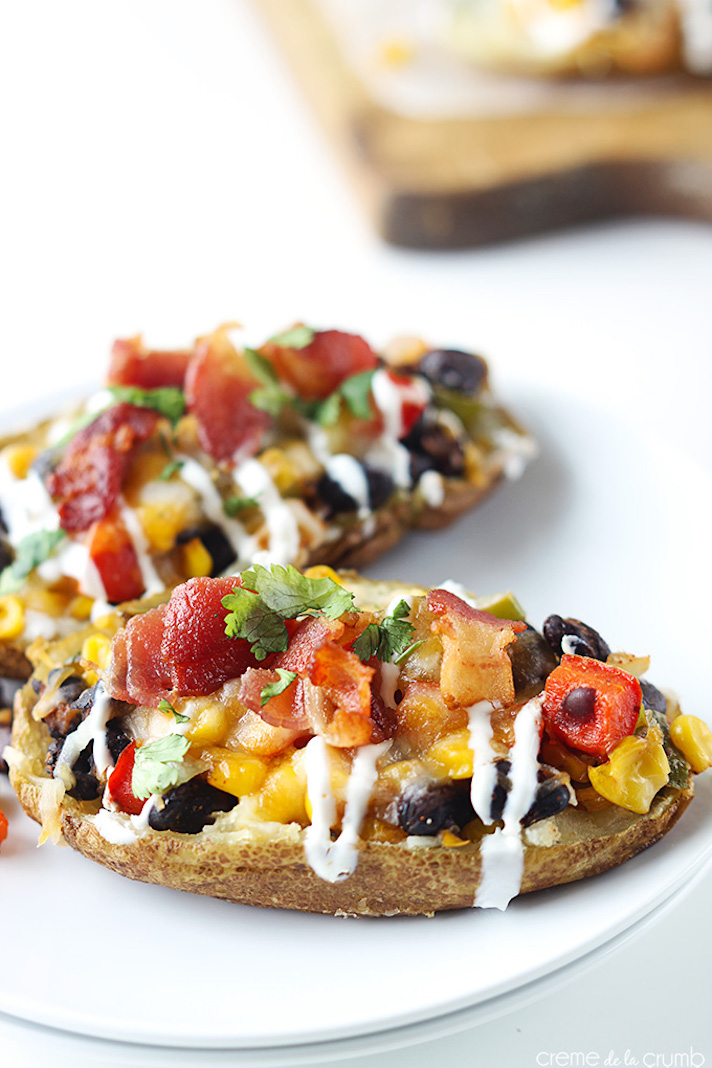 OK, so these Southwest loaded potato skins do have cheese and bacon, but they’re also loaded with veggies and fiber-rich beans. 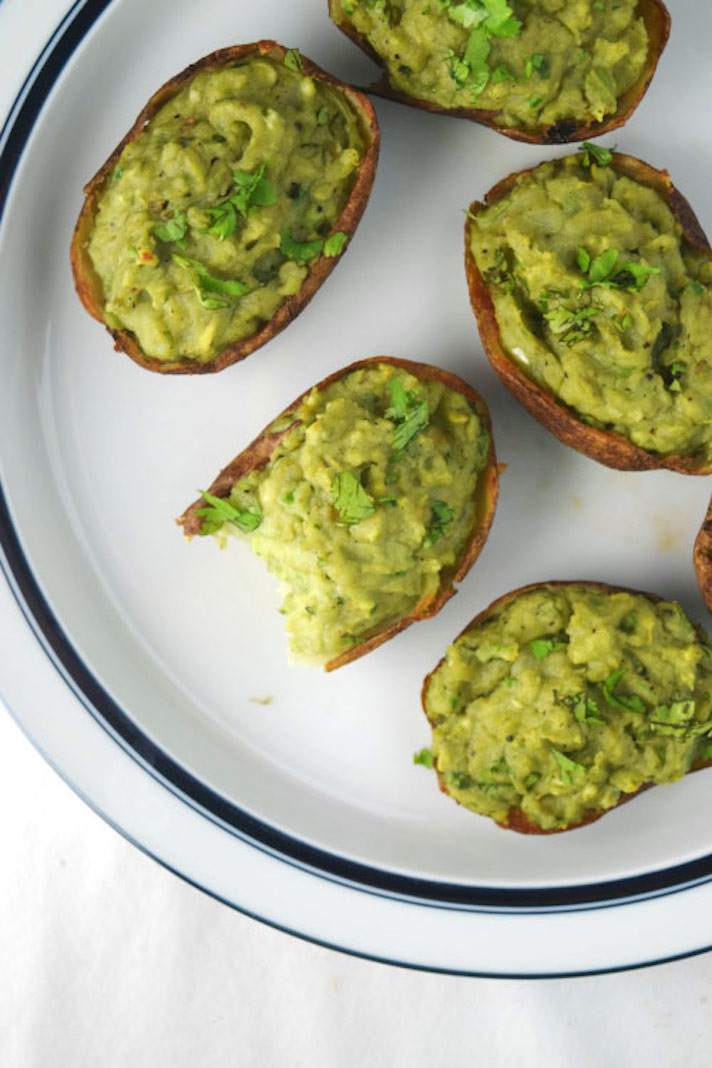 Packed with heart-healthy fats, these guacamole potato skins are a great side dish but can also be a full meal if you add some protein in the form of an egg or a little shredded chicken. 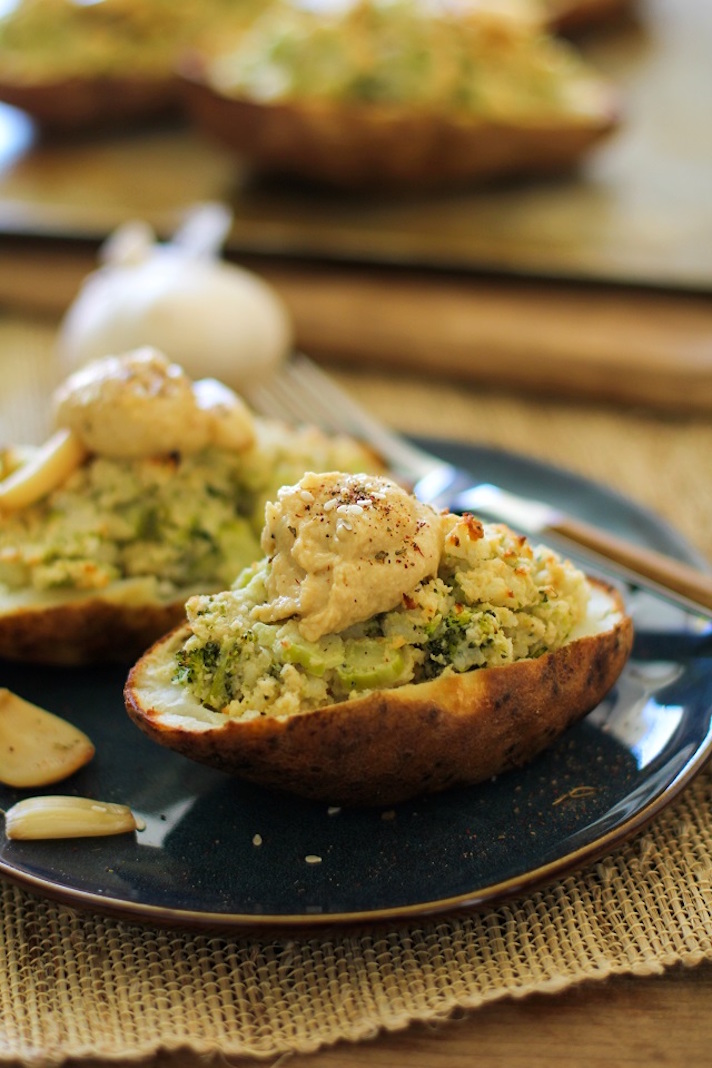 Instead of cheese or sour cream, these garlic, broccoli and hummus potatoes get their creaminess from puréed chickpeas. 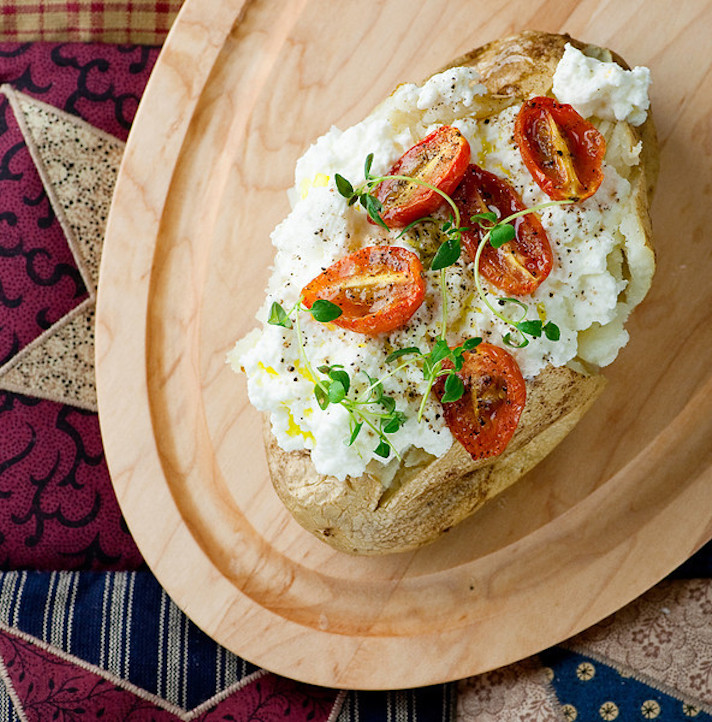 This ricotta-tomato potato makes a great light meal. If you want to add some protein, swap some or all of the ricotta for small-curd cottage cheese. 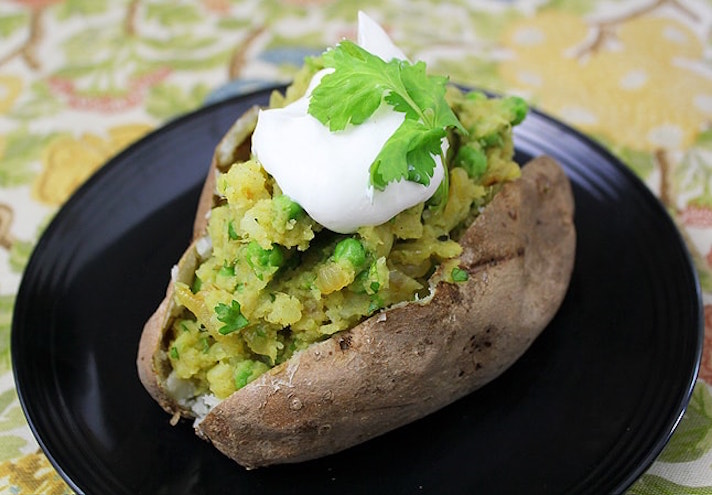 All samosa filling is potato-based, so it makes sense that you can skip the fried-dough casing and just make these samosa-filled baked potatoes instead. 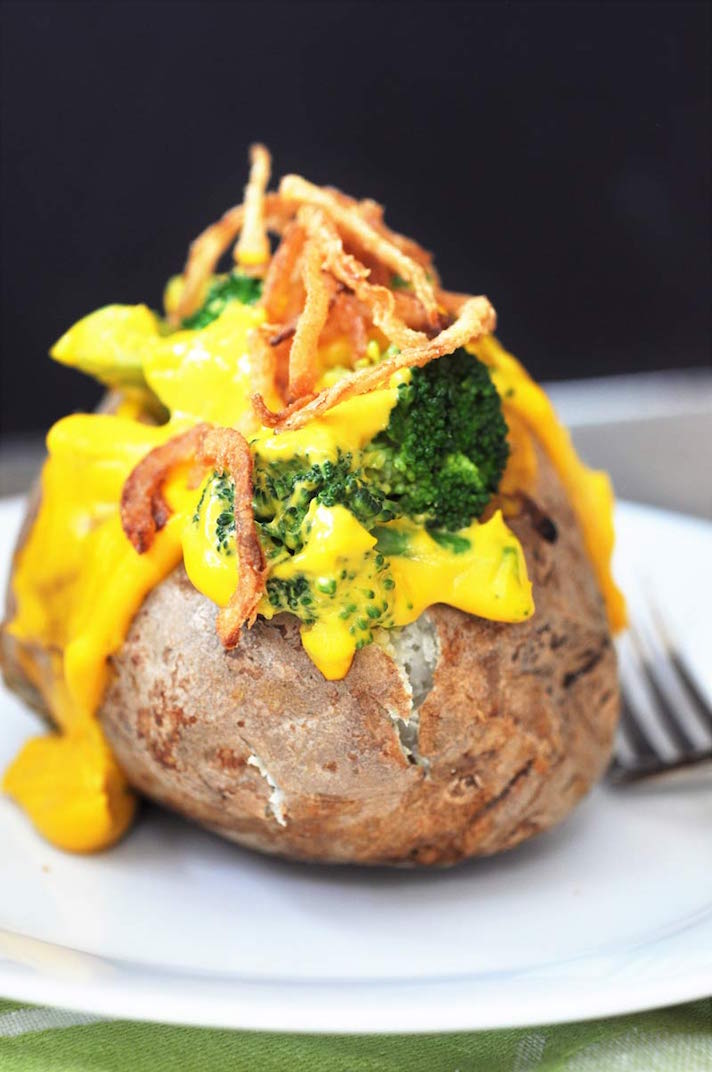 Make the vegan cheddar sauce with sweet potatoes, cashews, nutritional yeast and a few more ingredients. Then, serve it on a potato with broccoli and anything else you want. 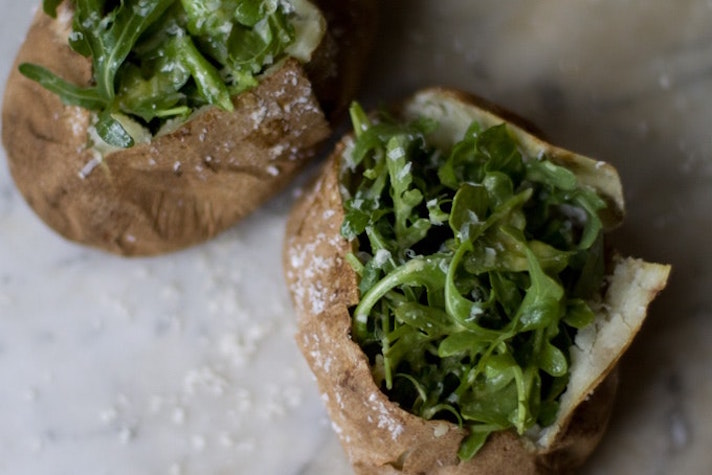 These sea salt baked potatoes taste great with some simply dressed arugula, but don’t be shy about adding other salad fillings like feta, salmon or some chickpeas. 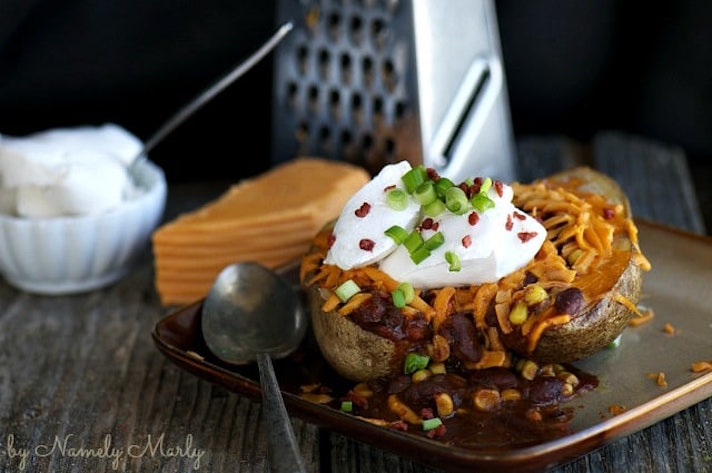 Instead of beefy chili, opt for the meat-free bean version. You’ll also need vegan cheese and sour cream (or yogurt!) for these vegan baked potatoes. 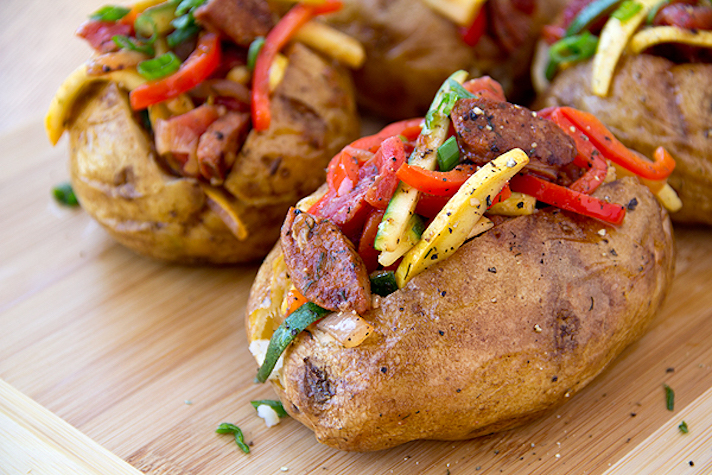 You don’t need to wait until summer to stuff a baked potato with grilled veggies and sausage — fire up a stovetop grill pan or just roast your vegetables while the potatoes bake instead. 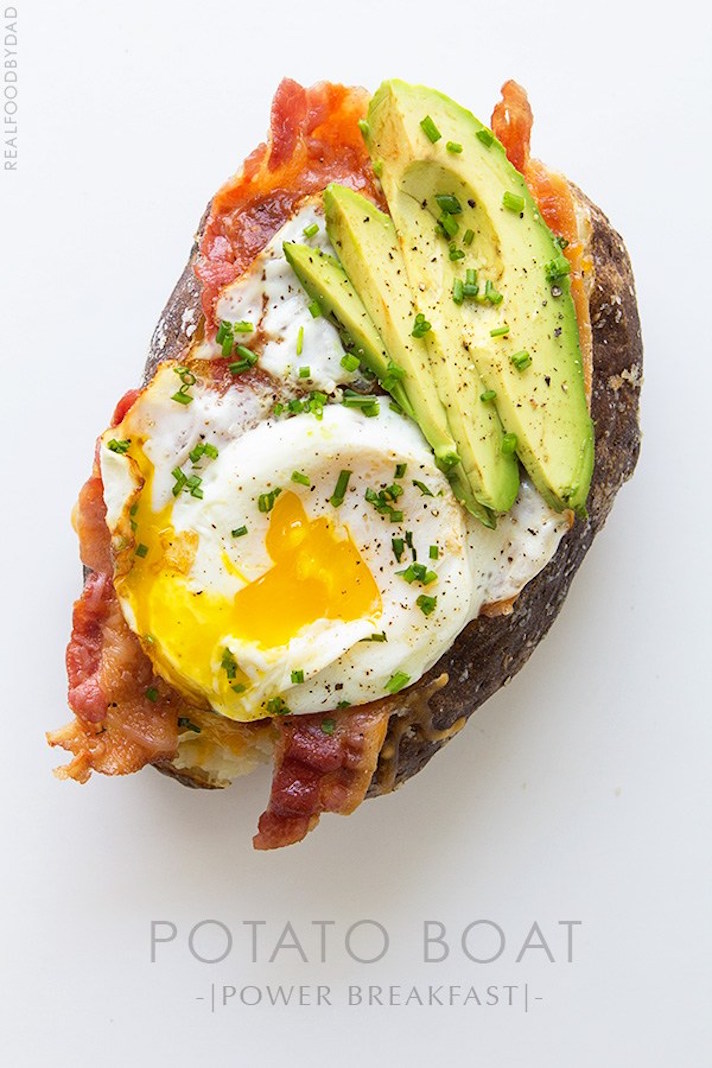 The beauty of these breakfast potato boats is that you can really use whatever breakfast fillings you have on hand. Omit the bacon if you’re not into it or add something like salsa and black beans to give the boats a new spin. 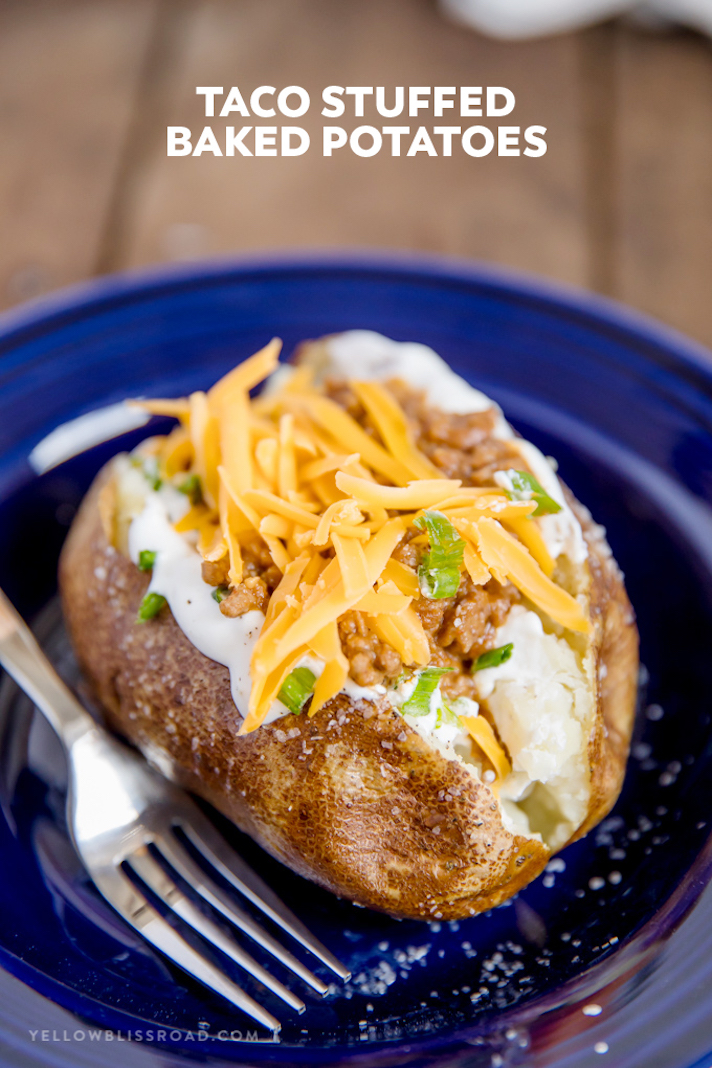 Thanks to plenty of fiber and protein, these taco-stuffed potatoes make a satisfying dinner. Add veggies in the tater or on the side to round it out. 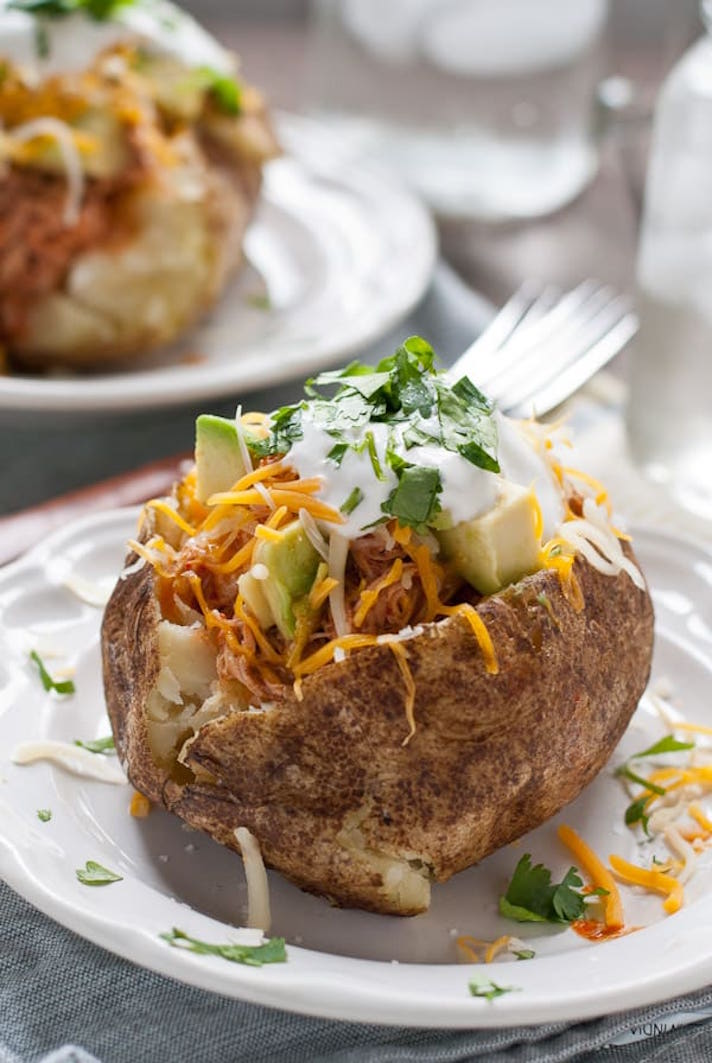 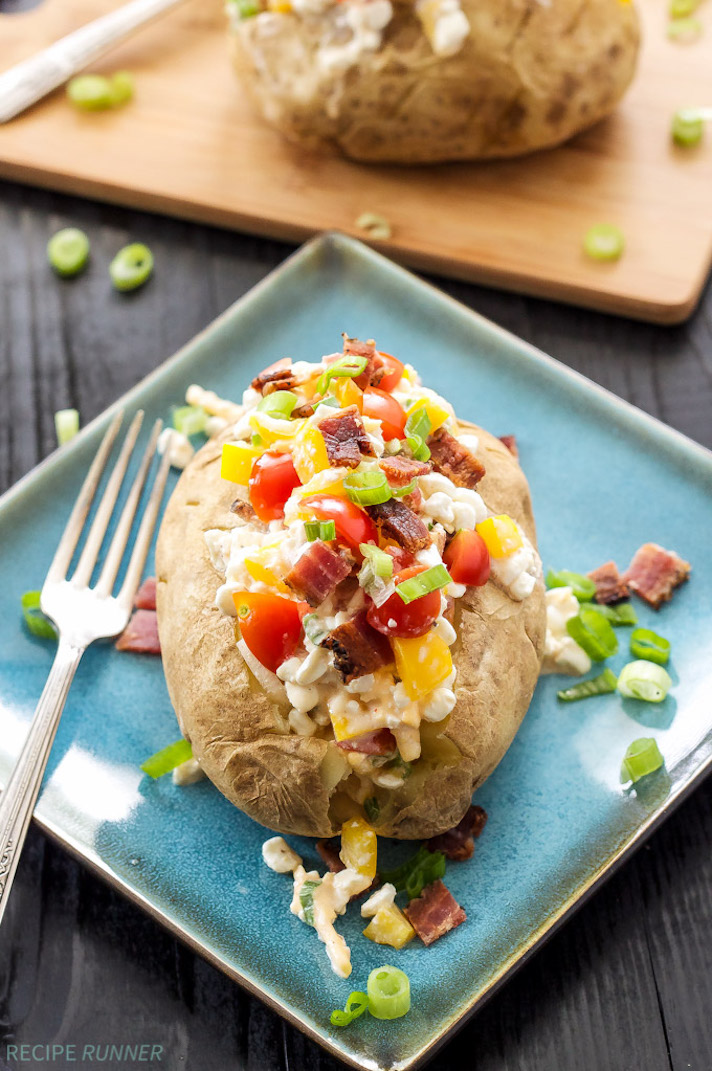