A medical team in Russia has shared photos from a mind-boggling procedure last week that saw them remove a 55-pound tumor that had been growing in a patient’s pelvis. The 59-year-old woman, who was not identified in a Central European News Agency (CEN) report, had reportedly been complaining of pain and difficulty breathing. 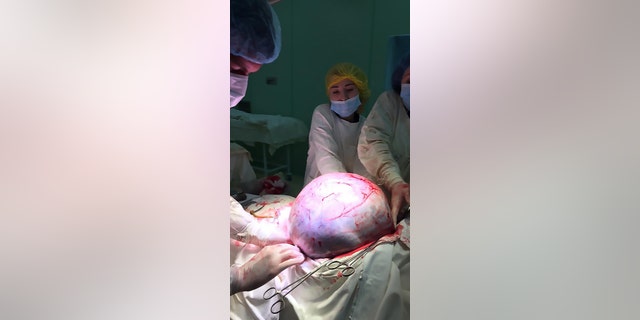 The tumor had been causing the patient severe pain and breathing issues.
(CEN)

“This case is not unique,” the staff at Moscow City Clinical Hospital in Moscow said on Facebook. “Our surgeons often come across similarly large tumors. The reason is often a delay in seeking medical help and the neglect of the patient’s health. Such neoplasms press on the intestines, stomach and diaphragm, causing discomfort and pain, but patients believe that everything will go away by itself.”

According to CEN, head surgeon Dmitry Aryutin performed a victory dance once he had completely removed the tumor. The tumor was found to be benign and the patient is said to have been stabilized and was doing well in recovery.

Ovarian tumors are the result of abnormal cell growth. Benign tumors are slow-growing and do not spread to other parts of the body, but their exact cause is not always known, according to the University of Colorado’s department of gynecologic oncology. Treatment typically involves surgical removal, and fertility is often unaffected, although most commonly occur in women of childbearing age.

Patients who have a history of obesity, infertility or family occurrence of ovarian tumors or ovarian cancer are most at-risk for developing ovarian tumors.